The global smart TV sticks market size was valued at USD 13.1 billion in 2018 and is expected to register a CAGR of 8.2% from 2019 to 2025. The growth of the market is attributed to the facilities offered by the smart TV sticks to watch over the top content from leading providers such as Netflix, HULU, and Amazon Prime. Changing home entertainment, modern living room with IoT enabled devices, and penetration of broadband is also accelerating the growth of the market.

Smart TV sticks are providing the consumers with on-the-go entertainment content of their choice and accessibility to all kinds of media content such as music, movies, shows, and series online, and live matches. Moreover, technological advancements in the television sets such as powerful speakers and big screens are enabling the consumers to spend more time watching the content on TV. Smart TV sticks are used in 38 million homes in the U.S., whereas there are only 28 million homes with smart TV penetrations. Major companies having a dominant share in the U.S. market include Apple, Chromecast, and Amazon. A prominent application of this product in the U.S. contributes majorly to the growth of the global smart television sticks market. 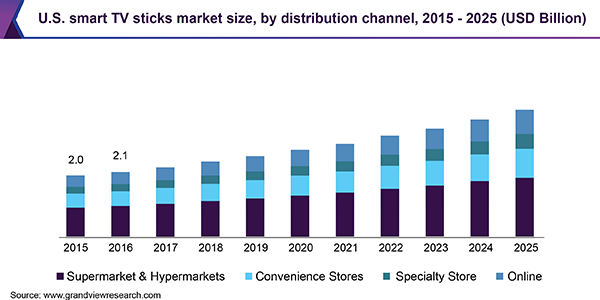 OTT, digital, and IoT enabled devices are the most common living room devices in the U.S. that provide a modern living experience. Smart TV sticks/box holds a 70.0% share in the U.S. market among other streaming devices such as smart TVs, game console, set-top box, and internet blue ray player. According to a survey, more than 40.0% of the U.S. OTT viewing population prefers smart TV service over satellite-based streaming. With the rise in popularity of smart TV sticks in the U.S., countries across the globe are adopting it and thus spurring the growth of the market. Amazon has its e-commerce channel, owing to which the sales of its smart TV stick, namely Amazon Fire TV stick, have increased.

The penetration of broadband remains one of the prime factors spurring the growth of the market. According to the Internet Live Stats, broadband penetration was more than 90.0% in the U.S. in 2017, which enabled high implementation of smart TV sticks. Developing countries such as India and China are expected to witness high demand in the coming years. Whereas, European countries such as Germany, France, and the U.K. are also anticipated to witness significant growth in the market.

The hypermarket and supermarket held the largest share of 48.0% in 2018. This distribution channel is expected to maintain its lead in the market owing to its benefits offered to the customers including real-time purchase decisions, different brands to choose from, and guidance from sales executive on choosing the best product. For instance, Chroma is the leading retailer of consumer electronics in India. Currently, there are 125 stores in 28 cities in India, offering a variety of smart TV sticks.

The online distribution channel is projected to expand at the highest CAGR of 8.6% from 2019 to 2025. An increase in the number of internet users, fast-paced lifestyle, ease of internet access, and penetration of e-commerce are some of the major factors contributing to the growth of this segment. Moreover, discounts and user reviews on online platforms are anticipated to fuel online sales over the forecast period. Moreover, many retailers such as Chroma have their presence online and are selling their products through e-commerce giants like Amazon and Walmart.

North America is an early adopter of technology and it held the largest smart TV sticks market share of 42.7% in 2018. The growth in this region is attributed to factors such as the increased adaptation of smart connecting devices, broadband penetration, and OTT content. U.S. is the largest consumer of OTT content, thereby making it the leader in the market. For instance, on average, a U.S. home has a viewership of approximately 49 hours across the month, which is the highest of all countries. 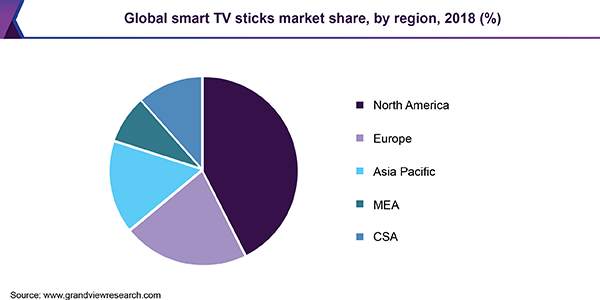 Asia Pacific is projected to be the fastest-growing region with a CAGR of 8.8% from 2019 to 2025. Consumer inclination towards the western entertainment content is the prime factor driving the market in this region. Modernization of network infrastructure, along with broadband, has accelerated the demand for live streaming, thus spurring the growth of the market. For instance, according to Business Line, 5G technology has been standardized to work on all bands in India. This will enable fast internet, which will further drive the global market in the APAC region.

The industry is dominated by leading players such as Amazon.com, Inc.; Roku, Inc.; Google.; Apple Inc.; Sky PLC; ASUSTeK Computer; Shenzhen Rikomagic Tech; Dongguan Sonicway Electrical Appliance; Shenzhen Tomato Technology; and CloudWalker Streaming Technologies. Product launches are a key initiative adopted by the market players to sustain the competition. For instance, Fire TV by Amazon.com has planned to expand the software to more areas, which earlier only included its dongles and boxes. This new area would include additional smart TVs, car entertainment systems, and cable boxes.

This report forecasts revenue growth at the global, regional, and country levels and provides an analysis of the latest industry trends in each of the sub-segments from 2015 to 2025. For this study, Grand View Research has segmented the global smart TV sticks market report based on distribution channel and region: