The global sodium benzoate market size was estimated at USD 1.22 billion in 2021 and is anticipated to witness a compounded annual growth rate (CAGR) of 6.1% from 2022 to 2030. Consumers' are moving toward processed food and beverage goods such as fruit drinks, snacks, processed meat, and others to fulfill their daily meal requirements. In many European countries, the popularity of missing meals such as breakfast has increased customer preference for processed and packaged food and beverage goods. Preservatives, including sodium benzoate, is an essential ingredient in processed food and beverage and has driven the market. 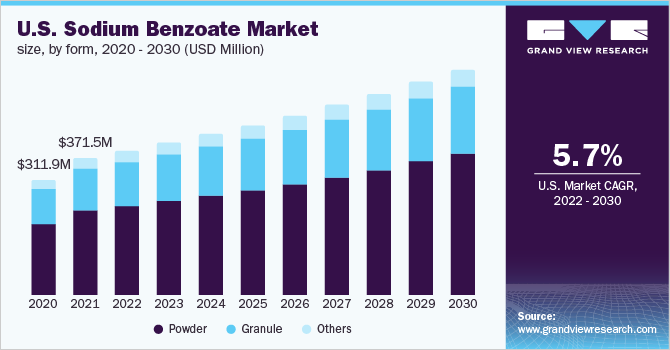 Due to the shutdown, channel partners witnessed a significant drop in demand. This resulted in higher inventory levels with most trade partners, as well as an inability to clear pending stock with them. During the first two quarters of 2020, sodium benzoate manufacturers experienced a substantial disruption in their raw material supply chain owing to the COVID-19 pandemic. The usage of sodium benzoate as a synthetic preservative in the food industry is a significant growth driver for the market. It is primarily utilized as an anti-microbial in lower pH products such as jams, salad dressings, carbonated drinks, pickles, etc. It is a popular food preservative due to its ease of manufacturing, colorlessness, and low cost. It is also employed as a preservative in liquid pharmaceutical formulations in the pharmaceutical sector.

Due to the rising worldwide population, the food industry and pharmaceuticals are expanding industries that will drive the market. Factors such as increased consumer awareness, increased urbanization, increased demand for medicinal supplies, and the growth of the packaged food business have driven the expansion of the market. Increasing public awareness about the dangers of synthetic preservatives, particularly in North America and Europe, is projected to limit market growth in the future years.

The use of dangerous chemicals in cosmetics, food, and pharmaceuticals is restricted and tightly monitored by government authorities in North America and Europe, which might have an impact on the rate of expansion of the market. Although sodium benzoate is a common additive in the industry, there are many replacements available in the market for both food and pharmaceuticals, limiting the market share of sodium benzoate.

The powder segment led the market and accounted for 60.9% of the global revenue share in 2021. Sodium benzoate E211 powder is a white powder with the strongest impact at slightly acidic pH levels. It dissolves readily in water but less in organic solvents. Sodium benzoate helps to preserve fruit and vegetable, salads, and fish marinades. It's also used to keep beer, olives fresh, and fruit yogurt. It is environmentally friendly and accumulates in water and soil.

The granules segment is expected to witness a CAGR of 5.4 % over the forecast period. Sodium benzoate granules are whitein color. This is the sodium salt of benzoic acid, which is water-soluble. It is utilized as preservatives in food. Such as fruit juices, pickles, salad dressings, carbonated drinks, jams, etc. As an antifungal, sodium benzoate is used to balance the pH inside individual cells, boosting the overall acidity of the product and making it more difficult for fungi to proliferate. These fungi can infect food and cause it to degrade, reducing its shelf life substantially.

The food and beverages segment dominated the market and accounted for 45.3 % of the global revenue shares in 2021. As per the International Program on Health and safety, sodium benzoate is widely used in the beverage sector. Sodium benzoate raises the acidity of soft drinks, which also boosts the flavor intensity of high-fructose corn syrup. Sodium benzoate is listed as E211 in the ingredients list on the back of a soda can, which is the number assigned to it as a food additive. E211 is a common ingredient in diet soft drinks. 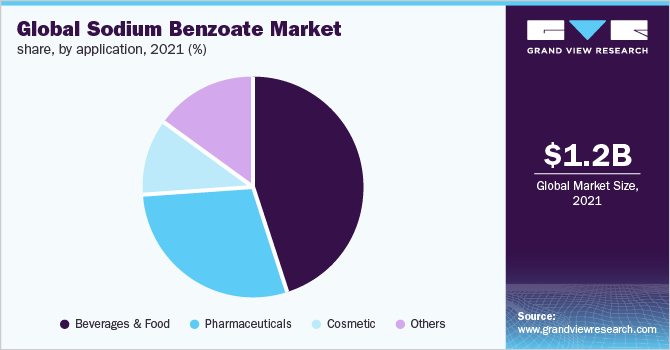 The cosmetic segment is expected to witness the fastest CAGR of 6.9% over the forecast period in terms of revenue. It has been determined that sodium benzoate can be used safely at percentages up to 5%, however, no immunologic phenomena should be considered when applying this chemical in cosmetic formulations for infants and children. Sodium benzoate is an antifungal preservative found in cosmetics and food. As a result, it is highly effective against fungus, yeasts, and bacteria.

Europe dominated the sodium benzoate market and accounted for the largest revenue share of 39.3% in 2021. Total demand for sodium benzoate in Europe remained low in the last quarter of 2020 due to the pandemic-induced slowdown. The rise of animal diseases like "African swine fever" in Germany caused a reduction in EU compound feed production across the region.

In Asia Pacific, the market held a revenue share of 16.2% in 2021. Sodium Benzoate prices increased in Asia Pacific in the first month of 2022, owing to increased demand from end-user industries and lower feedstock prices. Demand for sodium benzoate in the food and cosmetics industries increased due to the increasing disposable income and growing population. This resulted in a price increase for sodium benzoate in the domestic market.

The market is fragmented in nature as it features various global and regional market players. Leading industry players are incorporating strategies such as partnerships, collaborations, acquisitions and mergers, and agreements to expand their business footprints. In March 2022 Ganesh Benzoplast Ltd, in collaboration with Golden Agri International Enterprises Pte. Limited., KN Agri Resources Ltd., and other investors, entered the ethanol production and Extra Neutral Alcohol (ENA) by acquiring a 100 percent shareholding in Sagar Industries, a distillery in the Nasik, Maharashtra, India

DuPont de Nemours ("DuPont") and ("IFF") International Flavors and Fragrances Inc. signed a definitive agreement in December 2019, to merge DuPont's Nutrition and Biosciences ("N&B") division with IFF. In February 2021, the merger was completed. IFF received different legal entities affiliated with the N&B company as part of the merger. Some of the prominent players in the sodium benzoate market include:

This report forecasts revenue growth at global, regional, and country levels and provides an analysis of the latest industry trends in each of the sub-segments from 2018 to 2030. For the purpose of this study, Grand View Research has segmented the global sodium benzoate market report based on form, application, and region:

How big is the XXXXX market?

What is the XXXXX market growth?

Which segment accounted for the largest XXXXX market share?

b. North America dominated the sodium benzoate market with a revenue share of 39.3% in 2021. Asia Pacific held 16.2% of the revenue share in 2021 due to the expansion of the pharmaceutical and cosmetics markets. The demand for halal cosmetics is increasing in the Southeast Asian and Middle Eastern markets, which are expected to provide a solid foundation for the expanding preservatives market.

Who are the key players in XXXXX market?

What are the factors driving the XXXXX market?