The global soil conditioners market size was valued at USD 5.4 billion in 2018 and is expected to advance at a CAGR of 5.7% from 2019 to 2025. The consumption of these conditioners in the market is growing significantly due to the increasing population and shrinking arable land. Rapid industrial development worldwide has led to a rise in waste generation, which, in turn, has affected soil texture by increasing salinity and acidity of the soil. 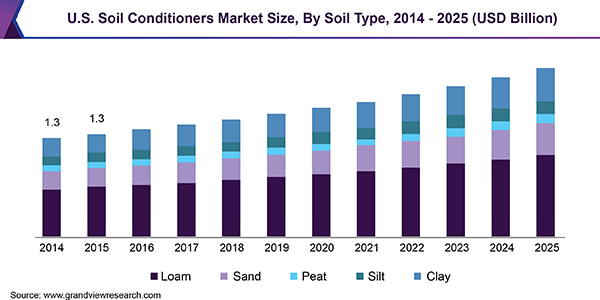 The soil quality and variety vary across different regions. Physical properties such as water retention, air permeability, and nutrition absorption capacity differ depending on the type of soil. Further, improvement in soil quality enhances the nutritional value of food crops. Soil conditioners are natural or synthetic products that are added during farming to improve the physical properties and fertility of the soil for agricultural produce. In addition, these conditioners are used in some non-agricultural areas such as turfs, industrial, and household gardening.

The U.S. agriculture sector is one of the most important sectors in the world. According to the U.S. Department of Agriculture (USDA), the country had a total of 2,029,200 farms occupying 899,500,00 acres of land in 2018. The average farm size was about 443.42 acres. Farmers in the country are well-trained and are equipped with novel technologies and follow advanced agricultural practices. In 2017, agricultural production contributed to USD 132.8 billion, which is equal to 1% of the country’s GDP.

Developing economies are adopting precision farming techniques to improve their agricultural yield. Precision farming involves the management of soil quality and crop growth with the help of electronic equipment, remote sensing, accurate record-keeping, and computer models. One of the major goals of precision farming is to monitor soil quality by keeping track of nitrates, electrical conductivity, and moisture. This type of farming is largely practiced in areas where labor is expensive and technology is advanced such as in the developed markets of North America and Europe. This type of farming reduces crop wastage, increases the average yield, and enhances soil & crop quality.

The agricultural department of every country has set certain regulations and guidelines regarding the usage of synthetic agrochemicals. Certain products have adverse effects on the soil and water, thus, resulting in health and crop hazards. Regulatory intervention in the form of new legislation and standards had a tremendous impact on the global conditioners market. Therefore, manufacturers of these conditioners in the market must cope with the introduction of new regulations by adjusting their manufacturing processes and raw material usage depending on respective laws. The European Commission modified its regulation no. 889/2008 in 2014, which prohibited the use of household waste in the compost used for organic farming.

Synthetic conditioners are natural polymer-based and have high molecular weight. They are used for the retention of essential nutrients, increasing moisture content, and boosting the physical properties of soil. Polymers are used for stabilizing and enhancing soil structure by maintaining moisture content. Synthetic products have better ability to increase soil binding and flocculation, thus, are preferred in regions with high erosion rate. However, the growing regulatory intervention in agrochemical industry is anticipated to restrain the consumption of synthetic conditioners in the market.

The global soil conditioners market has been segmented on the basis of different soil types, namely loam, sand, peat, silt, and clay. Each soil type has certain deficiencies and the conditioners to be applied depend on respective deficiencies. Conditioners can modify even the poorest quality soil to provide improved yields.

Loam segment accounted for a remarkable share of the market in 2018. It covers a major part of the earth’s crust and is considered highly fertile. Rotational farming is often practiced on loamy lands, which is expected to augment the demand for agrochemicals such as conditioners. Loam is widely available across all the regions, resulting in its dominance in the market.

Sand is exceptionally dry and is found in areas with extremely hot temperatures. Natural enhancers such as compost are best-suited for this soil type. The compost helps stick small particles together, thus, supporting water retention.

Factors such as changing weather cycles, delayed rainfall, and fluctuating water supply has resulted in the increasing adoption of hydrogel technology by farmers all over the world. The hydrogel market is estimated to reach USD 3.0 billion by 2025.

A major portion of the global agricultural land is used for the cultivation of cereals & grains. These products are considered to be a part of the staple diet in major countries. Cereals & grains, thus, registered the highest penetration with a market share of 42.6%, in terms of volume, in 2018. Fertile land with a sufficient amount of decayed organic matter such as humus is considered appropriate for cereals & grains. 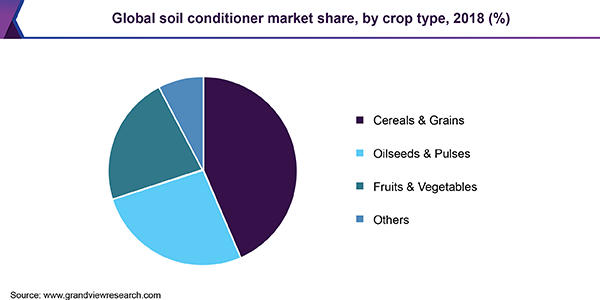 The land should be rich in moisture content at the time of sowing. Soil aeration and weed killing are prerequisites during the harrowing stage of these crops. The demand for soil conditioners for oilseeds is projected to increase significantly. Mustard and soybean are the highly consumed edible oilseeds in the market. The soil for the growth of these crops needs to have a balance of sulfur and calcium, thus, gypsum soil conditioners are highly preferred. In addition, pulses have a growing demand in the global market owing to increased awareness regarding their nutritional values, which is in turn projected to favor the market.

Asia Pacific is considered to be a major market for agricultural products on account of large fertile lands, considerably high rural population, and favorable climatic conditions. The region accounted for a revenue share of 35.7% of the global market in 2018. In spite of these favorable conditions, the regional market is witnessing rapid soil degradation and infrastructure inadequacy. Expanding population coupled with increased agricultural activities is expected to result in high dependency on conditioners on account of immediate reuse of land. Compost is the most widely used soil additive in Asia Pacific market.

North America is the second-largest market for soil conditioners. The U.S. is one of the major crop-producing countries worldwide and is characterized by technological innovation in farming methods and a robust regulatory framework favoring industry dynamics. It is one of the major producers of wheat and maize.

The Middle East & Africa lacks rich and healthy fertile land and is concentrating on developing its agricultural sector owing to the rising population and increasing demand for food. Large sandy terrains in the region have triggered the demand for soil conditioners that improve water retention capacities. Compost is the most widely used soil conditioner in this regional market. It is considered to be one of the most affordable manures used in the developing countries of Africa. The vast and growing agriculture sector coupled with large sandy terrains is expected to drive the regional conditioners market at a CAGR of 5.5%, in terms of revenue, from 2019 to 2025.

The market is highly competitive with the presence of numerous major players along with local and regional participants. Market players have majorly adopted the merger & acquisition strategy as they try to expand their current portfolio of conditioners and tap lucrative opportunities. In February 2019, UPL announced the completion of the acquisition of Arysta LifeScience, which is expected to help UPL strengthen its global position and broaden its product scope.

This report forecasts revenue growth at global, regional & country levels and provides an analysis of the industry trends in each of the sub-segments from 2014 to 2025. For the purpose of this study, Grand View Research has segmented the global soil conditioners market report on the basis of product, solubility, soil type, crop type, and regional.

How big is the soil conditioners market?

What is the soil conditioners market growth?

Which segment accounted for the largest soil conditioners market share?

b. Asia Pacific dominated the soil conditioners market with a share of 36.0% in 2019. This is attributable to rising focus on prevention of soil degradation.

Who are the key players in soil conditioners market?

b. Some key players operating in the soil conditioners market include BASF SE, Solvay S.A., Syngenta AG, Nufarm, and AkzoNobel .

What are the factors driving the soil conditioners market?

b. Key factors that are driving the market growth include rising population, shrinking arable land, and degradation in the quality of soil.