The global solar control window films market size was valued at USD 718.64 million in 2021 and is expected to expand at a compound annual growth rate (CAGR) of 6.6% from 2022 to 2030. Solar control window films protect from harmful radiation in a car or room since severe ultraviolet (UV) rays are fatal and can lead to skin cancer. Also, solar control window films are useful for preventing fading of furniture in the interiors of a car as well as houses. The installation of these films is inexpensive and user-friendly and helps improve the aesthetic sense of a building. 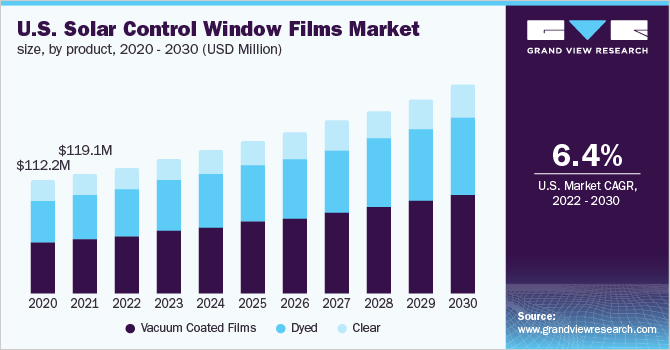 According to the U.S. Department of Energy, approximately one-third of a building’s cooling costs are attributed to heat gained through windows. Solar control window films control the amount of heat penetrated through the windows, thus reducing the cost and energy needed to cool the building with appliances such as air conditioners and helping in the reduction of carbon footprint.

The U.S. is the major market in North America for solar control window films. Major players such as 3M; Eastman Chemical Company; Johnson Laminating and Coating, Inc.; and Madico Inc. are based in the U.S. The U.S. is witnessing a resurgence in the construction sector, particularly the residential segment. Favorable government policies, coupled with the growing automotive sector, have driven the market in this country.

Vacuum-coated solar control window films held the largest share in the U.S. in 2021. Extreme weather conditions in this country have propelled people to install vacuum-coated solar control window films, which reflect the sun away from the building or vehicle. Dyed films, which are most commonly used in the automotive segment, are expected to witness increased demand on account of the growing automotive industry in the U.S.

Vacuum coated films dominated the global market in 2021 with over 45.0% of the revenue share. This is because these films reflect the largest amount of solar radiation, keeping the interiors cooler as compared to other films. Increasing construction activities globally and the growing automotive industry are the main drivers providing the necessary boost to the market for solar control window films. Vacuum coated solar control window films are also known as reflective films. The metal content in these films reflects the sun's incoming heat and also blocks harmful UV rays, which can prove fatal. These films are metalized using various methods such as sputtering, vapor deposition, and beam deposition.

Dyed solar control window films, also known as non-reflective films, are the next leading product for the market. These films are mainly used on automotive windows. The growing automotive industry around the world, particularly in the emerging Asia Pacific, Latin American, and the Middle East & African regions is the major driver of this segment. These films also find applications in the construction sector, particularly in tropical regions.

The construction segment accounted for the largest revenue share of over 55.0% in 2021. This industry can be further divided into residential and non-residential sectors. The growing population and increasing per capita income of people have driven the construction industry globally. Solar control window films have many advantages in the construction sector. Blocking harmful UV rays not only prevents people from contracting skin disorders but also improves employees' productivity in offices. 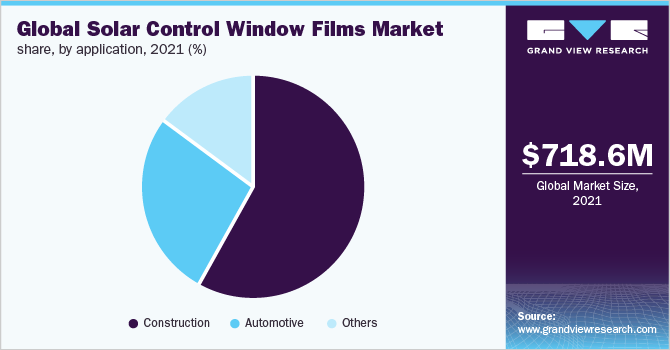 The global automotive industry was severely affected by the coronavirus pandemic. However, since then, it has gained momentum and has been on an upward surge. With growing temperatures, the application of solar control films on the windows of vehicles has become even more important. They block harmful UV and infrared radiation from entering the car. This not only keeps the car cool but also avoids fading of the interiors such as the dashboard and seat covers of cars. Also, solar control window films avoid glares and reflection of lights even at night while driving.

Asia Pacific emerged as the leading region and accounted for a revenue share of more than 35.0% in 2021. The Asia Pacific region is considered to be the most rapidly developing region in the world with the presence of emerging countries such as China and India. The market in this region is driven by growing construction spending and a high temperature generally throughout the year. Growing automotive industries in countries such as Indonesia and South Korea have also boosted the industry. 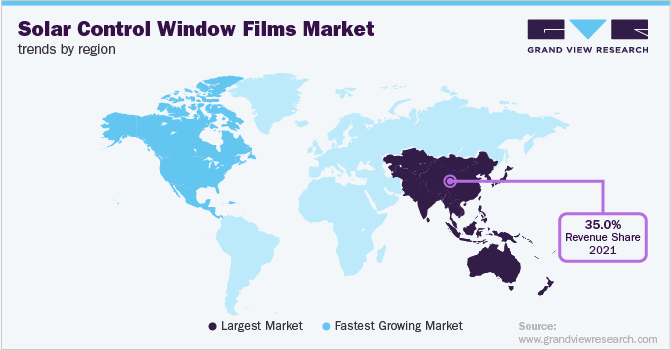 The market is also driven by the growing automotive industry in this region. Some of the major automotive manufacturers such as Tesla, Ford Motor Company, and General Motors are based in this region. The construction sector dominated the North American market in 2021. Growing residential constructions and lenient lending policies have led to the growth of this sector.

The companies are adopting organic and inorganic strategies such as new product developments, mergers & acquisitions, expansions, agreements, joint ventures, and collaborations in order to expand their product portfolio and geographical reach and consequently, acquire a greater market share. For instance, in May 2020, Madico Inc. received a Seal of Recommendation by The Skin Cancer Foundation for its architectural and automotive window films, which block 99% or more of UVB and UVA radiation. Some prominent players in the global solar control window films market include:

This report forecasts revenue and volume growth at the global, regional, and country levels and provides an analysis of the latest industry trends and opportunities in each of the sub-segments from 2019 to 2030. For the purpose of this study, Grand View Research has segmented the global solar control window films market report on the basis of product, application, and region: 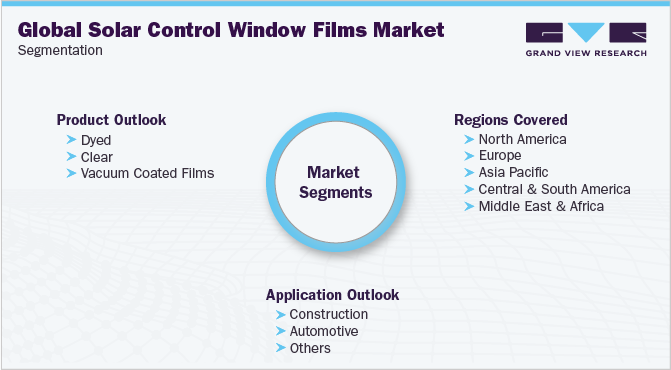 How big is the solar control window films market?

What is the solar control window films market growth?

b. Clear window dominated the solar control window film market with a share of more than 51.0% in 2021. This is attributable to its property to reflect the largest amount of solar radiation, keeping the interiors cooler.

Who are the key players in the solar control window films market?

What are the factors driving the solar control window films market?

b. Key factors that are driving the solar control window film market growth include the property to protect the interiors of buildings and cars from harmful ultra-violet (UV) rays and infrared radiations (IR).