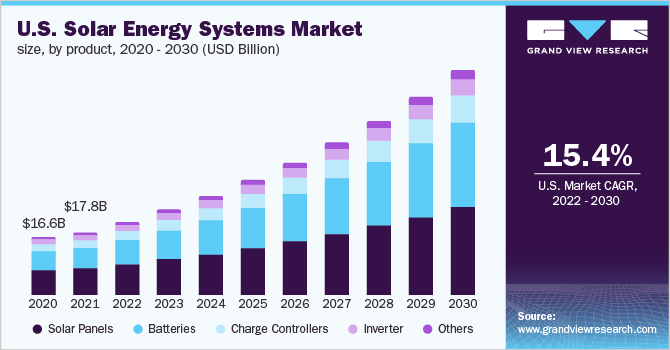 Governments all across the world have set targets to reduce carbon emissions from countries and are promoting the adoption of solar energy systems for utility and non-utility end-uses. The U.S. is one of the early adopters of solar energy in the world for the purpose of power generation. The market in the U.S. has been growing steadily with the presence of key players engaged in research and development to increase efficiency and decrease the cost of the components. In 2021, solar energy accounted for about 2.8% of the total energy production in the country. The country has been investing in research for more efficient solar technology to make it more accessible for residential and commercial uses. For instance, in November 2020, the U.S. department of energy announced research funding worth USD 130 million for advanced solar technologies.

The majority of the research funding will be invested in PV hardware research and will be focused on increasing the operational lifespan of silicon solar cells. The government of Germany introduced the ‘Package for the future-expansion of renewable energies in 2020, which was aimed at promoting renewable energy and reducing the reliance on conventional energy sources. The policy removed the limit on solar PV build-out and made it possible for any buildings to install solar energy systems. Companies, such as Tesla and BYD Company Ltd., have been investing in better battery technologies for solar energy storage. This is expected to boost the product demand as more efficient battery technology increases the viability of solar energy system installation for power generation.

On the bases of products, the global industry has been further divided into solar panels, charge controllers, batteries, inverters, and others. The solar panels segment led the global industry in 2021 and accounted for the maximum share of more than 41.45% of the overall revenue. Solar panels are the most critical part of the solar energy system as it is responsible for converting solar energy into electrical energy. There are different types of solar panels, such as thin film and crystalline silicon, which are used based on the application of the installation. There have been heavy investments in advanced solar panel technologies to increase the efficiency and lifespan of the panel.

The solar panel segment is expected to maintain its lead throughout the forecast period. The charge controllers segment also held a significant revenue share in 2021. Charge controllers are used to protect the battery and the inverter from damage due to high voltage. Charge controllers have been relatively consistent in technology. The battery segment is estimated to grow considerably from 2022 to 2030. Battery for solar energy storage has been the focus of many companies in the industry as battery makes it possible for storage and transmission of solar energy even when there is no sunlight, such as during the night.

The inverter technology has seen significant advancement in the last decade with the price of solar inverters reducing significantly. Solar inverters convert the DC charge generated from the solar panels into AC charge, which can be used by appliances in the house. The others segment consists of racking, mounting, and wiring required for the product installation. This segment is expected to grow at a sluggish CAGR over the forecast years owing to fewer investments in the segment coupled with already low prices in the segment hindering industry growth.

The utility end-use segment led the industry in 2011 and accounted for the largest share of more than 66.30% of the overall revenue. The segment will maintain its lead throughout the forecast period. Many countries are investing in solar energy for utility-scale electricity production to switch away from conventional energy generation. This is expected to increase the product demand. Utility-scale solar energy systems are more profitable due to economies of scale being achieved by larger installations. The industry is anticipated to have a steady growth in all segments as the product demand increases. The industrial end-use segment is expected to register the fastest CAGR from 2022 to 2030due to the increasing industrial activity in APAC and MEA. 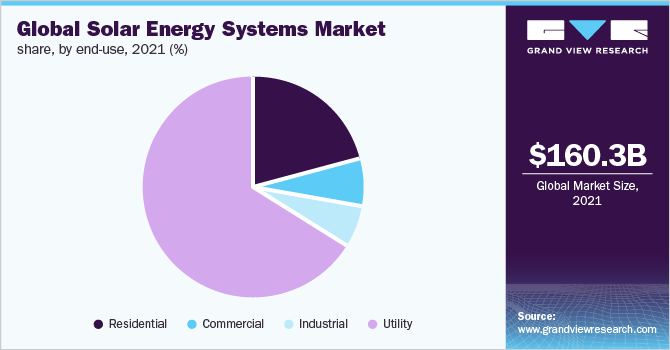 Growing demand for electricity in the industrial sector coupled with the increasing viability of installing solar energy systems on a smaller scale is expected to boost demand further. The residential end-use sector is expected to grow significantly during the forecast period owing to the increased affordability of solar energy systems for the residential sector. The price of these systems has been declining for the last 10 years due to investment in technologies to increase production efficiency. Incentive schemes and policies introduced by the governments of various countries have also boosted product adoption. The commercial end-use sector is expected to increase at a steady CAGRover the forecast period. Countries all around the world are moving to service-based economies where the commercial sector is the largest contributor to GDP. This is expected to increase the demand for the market.

The new installation source segment led the industry in 2021 and held the maximum share of more than 96.95% of the global revenue. Solar energy technology is in its adoption phase and many countries are promoting the installation of solar energy systems for power generation. Many countries are investing in utility-scale solar installations to reduce carbon emissions in the country, which is expected to increase product demand. The MRO segment is expected to witness significant growth in the coming years as existing products get old and need to be repaired and overhauled with newer technology. The demand in the MRO segment is expected to increase over the forecast period owing to the difference in lifespans of various components.

For instance, the average operational life of a PV inverter is between 10 and 15 years while the average operational life of solar panels is about 20-30 years. Due to this difference, an inverter replacement will be required in the lifespan of a solar panel. Similar differences in the operating lifespan of components are expected to increase market demand in the forecast period. Solar energy systems also require regular maintenance for optimum operation as it reduces the payback period on the installation. Due to rapidly advancing technology, many times components are upgraded to increase product efficiency. These factors are expected to boost the segment growth in the coming years.

Asia Pacific dominated the global market in 2021 and accounted for the largest revenue share of over 59.49%. East Asia led the Asia Pacific regional market in 2021, in terms of revenue. The need to reduce reliance on conventional sources of power and the presence of established players continuously developing better offerings has resulted in high product demand in the region. The Middle East & Africa region is expected to grow at a significant CAGR from 2022 to 2030 owing to the increased investments in renewable energy from the countries in the region. The region has a relatively low adoption of solar energy due to its high installation costs. 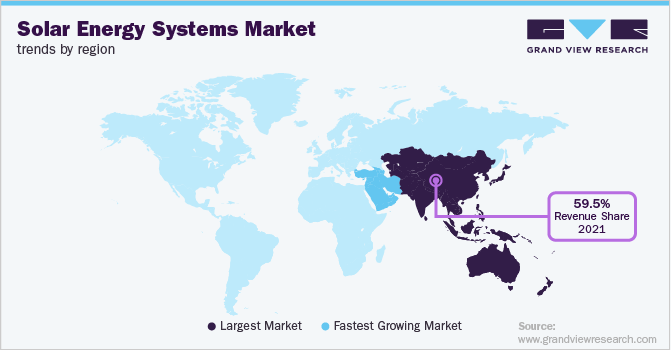 The industry is highly competitive with players involved in R&D and continuous launches of more efficient products. The industry is highly fragmented with various companies involved in a particular component. For instance, companies, such as Jinko Solar and LONGi Solar, are almost exclusively involved in the production of solar panels. These companies do not manufacture other components in the system and focus on developing more efficient solar panels. Companies, such as Huawei Technologies Co., Ltd., and Fimer Group, manufacture solar PV inverters.

This has resulted in the continual development of technology and cheaper & more efficient products being offered on the market. However, there has been a shift in the industry as more and more companies have started to produce other components to gain higher shares For instance, in July 2022, Jinko Solar launched a residential energy storage system under the name of ‘SUNTANK’, which is a new solar battery. The battery will have a capacity of 2.56kWh to 25.6kWh and have a warranty of 10 years. Some of the prominent players operating in the global solar energy systems market are:

This report forecasts revenue growth at global, regional, and country levels and provides an analysis of the latest industry trends in each of the sub-segments from 2019 to 2030. For the purpose of this study, Grand View Research has segmented the global solar energy systems market report based on product, end-use, source, and region: 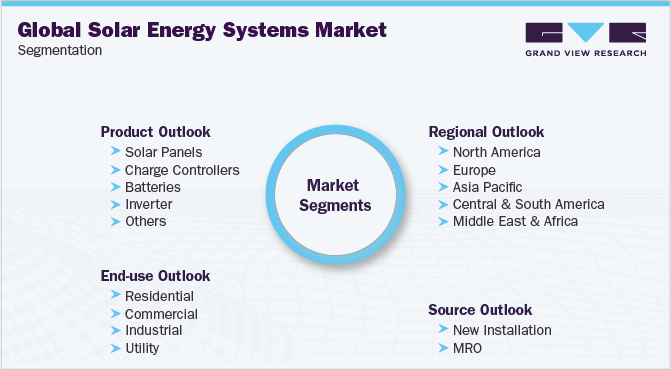 b. The solar panels product segment accounted for a share of 41.47% in 2021. However, Battery segment is expected to be the fastest growing segment in terms of Product for Solar energy systems from 2022 to 2030. High amounts of investment from the government of different countries along with private companies is expected to increase the demand for solar energy systems.

Who are the key players in the solar energy systems market?

What are the factors driving the solar energy systems market?

How big is the solar energy systems market?

What is the solar energy systems market growth?