The global solar PV panels market size was valued at USD 146.08 billion in 2021 and is expected to expand at a compound annual growth rate (CAGR) of 7.8% from 2022 to 2030. The increasing use of solar panels in the European region, especially countries such as Spain and Italy, whose strategic geographic location exposes them to the maximum amount of sunlight throughout the year, is expected to drive the market. The U.S. emerged as the largest market in North America in 2021. The U.S. is recognized as one of the largest countries in terms of adoption of PV panels globally, owing to rising consumption of PV panels in the country. This market is projected to grow at a significant CAGR during the forecast period. Factors such as substantial PV projects under construction and in the planning stage, coupled with several government support measures, are expected to increase the cumulative installed capacity of solar energy during the projection period. 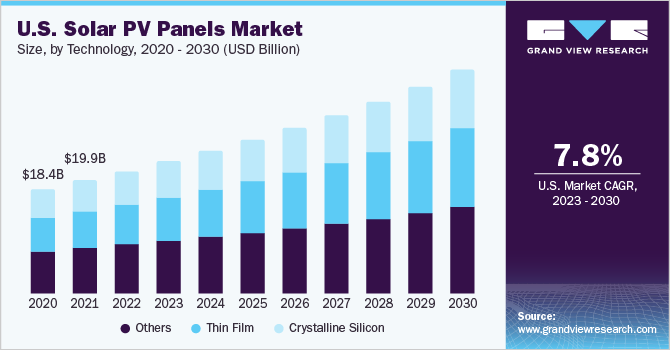 Increasing awareness among people regarding the use of low carbon-intensive technologies to limit carbon footprint is one of the major factors driving the adoption of solar PV systems in the commercial, industrial and residential sectors. Furthermore, the extension of Investment Tax Credit (ITC) for residential solar PV installations at 26% by 2022 and 22% by 2023, is anticipated to boost the growth of the industry in the coming years.

The Solar Investment Tax Credit (ITC) is a federal tax incentive enacted into law to encourage the deployment of solar energy in the United States. This federal tax credit is claimed against the tax liability of residential, commercial, and utility-scale investors in solar energy projects.

Photovoltaic cells or solar cells are primarily employed to convert solar energy into a flow of electrons. These cells produce electricity from sunlight, which can be used to power equipment or recharge batteries. Initially, photovoltaic cells were used to power spacecraft and orbiting satellites. However, over the past few years, they are being increasingly used for grid-connected electricity generation. Photovoltaic systems aim to maximize productivity for better performance. These factors are expected to enhance the growth of the market during the forecast period.

In Canada, after recovery from the COVID-19 pandemic, the market is expected to witness policy changes from the government to accelerate the growth of the domestic solar energy market. Factors such as upcoming solar projects and government support to reduce the reliance on fossil fuels are expected to promote the use of renewable energy sources. This is anticipated to foster the demand for solar PV panels in the country during the projection period.

In terms of revenue, the thin-film segment accounted for the largest revenue share of 42.07% in the global market in 2021, owing to its narrow design, strong durability, and manufacturing from flexible & lightweight materials. Based on technology, the solar PV panels market has been segmented into thin film, crystalline silicon, and others. Thin-film solar PV panels find major application in commercial and utility-scale projects as these lightweight panels have reduced installation costs.

The crystalline silicon segment is projected to witness substantial growth during the forecast period owing to the extended lifecycle of panels, low weight volume ratio, and low-cost manufacturing of silicon semiconductors. Monocrystalline solar PV panels are made from the highest-grade silicon and possess higher space efficiency compared to thin-film solar PV panels. However, companies manufacturing monocrystalline panels target only the premium segment of the market owing to high initial investment for these panels.

In terms of revenue, the off grid segment is projected to ascend at the highest CAGR of 16.4% during the forecast period. Based on grid, the market has been segmented into on grid and off grid. The rising energy demand from isolated locations worldwide, along with the formulation and stringent implementation of various regulatory policies for decentralizing the power generation sector, is expected to positively influence the growth of the off-grid type segment in the coming years.

The dominant position of the on-grid type segment in the market can be attributed to the low operating and maintenance costs of grid-connected PV systems and their non-complexity. On-grid PV systems have low costs as the excess electricity generated by them is transmitted to grids. These systems eliminate the requirement of installing battery storage near them.

With regards to revenue, the industrial application segment led the market in 2021 by accounting for a share of 40.61% of the market. Based on application, the market has been segmented into residential, commercial, and industrial. The growing demand for clean electricity is expected to increase the number of utility projects and fuel the PV modules market growth across industrial sector. 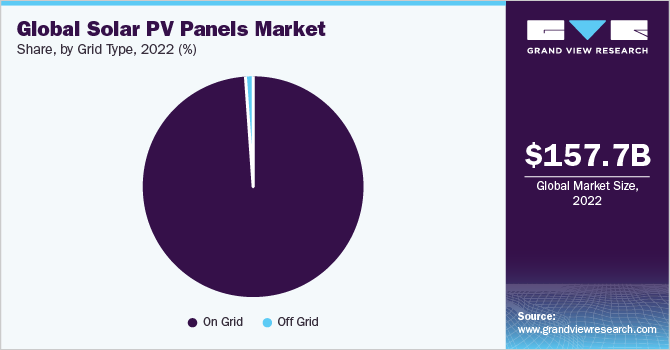 The commercial solar PV panels have a lifespan of 15-20 years and can be used to power industrial buildings in off-grid or remote locations, pre-heating ventilation air, and water heating in offices, businesses, and others. The rapid adoption of PV modules in corporate offices, hotels, and hospitals, coupled with increased power demand in communication base stations and data centers, is expected to drive product demand across the commercial sector.

The residential application segment is expected to grow at the highest CAGR during the forecast period. Rooftop solar PV equipped with an energy battery storage system provides reliable secondary power in residential households, thereby boosting product demand across the segment.

The deployment of large-scale storage systems to protect against peak demand power changes has resulted in the adoption of extra-large rooftop solar PV systems to store the desired power in batteries. Increasing energy demand due to population growth and industrialization is expected to stimulate the growth of the regional market.

Asia Pacific accounted for the largest market share of 54.18% in terms of revenue, in 2021; it is expected to remain dominant during the projection period. The increasing demand for solar PV panels in Asia Pacific is attributed to the rising installation of solar power projects in China and India. These countries are the key markets for solar panels both globally and in Asia Pacific.

North America occupied a significant market share in 2021. In North America, power generation from industrial sector solar cells has increased over the years as more efficient solar cells are in the market. In addition, the intensifying competition in the market has helped reduce the price of electricity produced, as well as increase the variety of solar panels. These factors are expected to bolster the demand for solar PV panels in the region during the forecast period.

In Mexico, increasing solar energy installations owing to the projects announced in the LTAs during 2015-2018, rising demand for decentralized solar energy systems, and the ambitious renewable energy targets are expected to drive the solar PV market during the forecast period. In the Middle East and Africa, the growth is attributed to the large-scale solar power plants under construction that are expected to be operational in the coming years. Various guidelines are being implemented in different countries to support the growth of solar power, with the aim of converting to renewable energy in the future.

The global market is highly competitive and consolidated due to presence of large number of market players. Technology sourcing, skilled man power, and strong R&D are among the significant factors governing the competitiveness of the solar PV panels industry.

In November 2020, Canadian Utilities, an ATCO company, announced the completion of Canada's largest off-grid solar project, which was built in two phases. The first phase included a 600kW solar farm and the second phase included a 2,200kW solar farm. This is expected to increase the demand for solar PV panels in the country in the coming years. Some prominent players in thesolar PV panels market include

This report forecasts revenue growth at global, regional, and country levels and provides an analysis of the latest industry trends in each of the sub-segments from 2019 to 2030. For the purpose of this study, Grand View Research has segmented the global solar PV panels market report on the basis of technology, grid, application, and region:

How big is the solar PV panels market?

What is the solar PV panels market growth?

b. Asia Pacific dominated the solar PV panels market with the highest share of 54.18% in 2021. The presence of large market players along with favorable government policies providing subsidies and financial incentives to PV projects are among the key factors contributing to the industry growth in China.

Who are the key players in the solar PV panels market?

What are the factors driving the solar PV panels market?