The global soy flour market size was valued at USD 2.9 billion in 2018. Increasing demand for gluten-free flour with a rich source of iron, proteins, vitamins, and calcium as well as pleasurable flavor characteristics in the food industry is expected to remain a favorable factor. Furthermore, the rising importance of a vegan diet in developed economies including the U.S., Germany, and the U.K. is projected to upscale the requirements of soy flour.

Over the past few years, the market has been witnessing significant growth owing to the growing popularity of gluten-free, organic, natural, healthy, and baked food products. The flour is associated with various qualities such as it adds moisture and boosts protein and calcium in baked goods. Moreover, it provides a flavor of soymilks and textured vegetable protein. This multi-nutritional flour has resulted in enhancing the flavor, improving texture, and reducing the percentage of fat absorbed in food products. 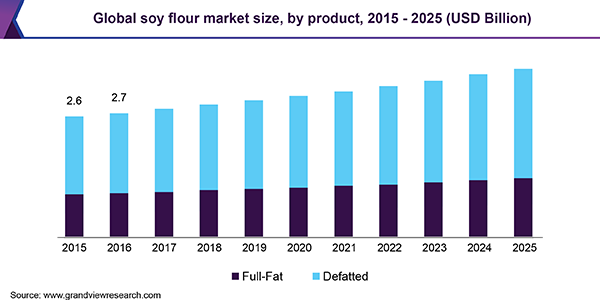 Rising acceptance of soy-derived flour in processed baked items owing to its nutritional qualities including gluten-free, trans-fat free, and whole-grain food products are fueling the market growth. Increasing demand for processed foods including cakes, pastries, donuts, pies, and bread at a global level is expected to expand the scope of soy flour soon.

Moreover, major baked goods manufacturers are launching new products to cater to the growing consumer demand. For instance, in April 2016, Britannia Industries Ltd. launched ‘Vita Rich Slice’ bread made up of refined soy and wheat flour. These gluten-free products are a healthy substitute for various high cholesterol products and hence, they are beneficial for cardiovascular disease patients.

The rising popularity of the vegan diet is expected to propel the demand for soy-derived flour owing to its nutritional value such as high dietary fiber and bioactive components including isoflavones. Moreover, flour derived from soy has gluten-free property and it acts as a prime source of protein in a vegan diet. Also, flour derived from soy is beneficial in reducing the risk of cardiovascular disease.

In 1999, the Food and Drug Administration (FDA) approved that the usage of soy protein is beneficial for the health as well as it helps to reduce the risk of associated heart disease. Moreover, the FDA authorized the product nutrition labels stating soy protein consumption reduces the risk of coronary heart disease. The FDA established that introduction of soy protein in a regular diet reduces the saturated fat and cholesterol level in the human body, thereby reducing the risk of cardiovascular diseases. These initiatives ensure significant growth of the market in the foreseeable future.

Full-fat and defatted flours are primarily used for the production of bakery and confectionery products, meat substitutes, functional drinks, and soy milk. According to the Soyfoods Association of North America, over the past few years, baked goods manufacturers have started using soy flour as a substitute for wheat flour by 10% to 30% of its total quantity in the products. This significant adoption of the product in the food industry has increased the scope of the market and is expected to fuel the product demand over the forecast period.

To produce low-fat or defatted flour, a mechanical extractor is used that removes around 75% of the oil present in the seeds. Various innovative technologies are developed to extract oil from soy seeds such as using high-pressure carbon dioxide as an extraction medium. These innovative technologies ensure the growth in the production of flour owing to the rising demand for soy-derived flour in the food industry.

Soy and its derived products such as flour, milk, tofu, tempeh, and other soy products are some of the best meat substitutes available in the market. Moreover, the vegan population has increased the demand for soy products over the past few years. According to the Vegan Society, demand for natural food and plant-based products has been increased by more than 900% in 2017, and demand for vegan food products was the biggest food trend in 2018. Major manufacturers are adopting several strategies including switching to all-vegan product portfolio and new product launch to cater to the rising demand from the consumers. 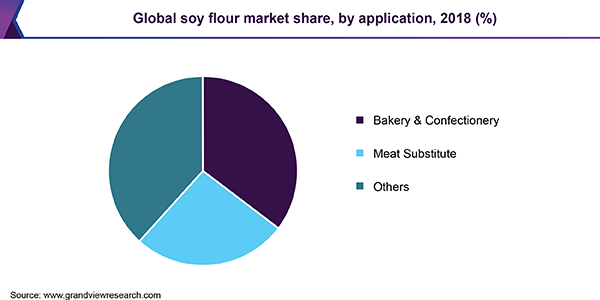 For instance, in March 2019, Morningstar Farms, a subsidiary of Kellogg Co., which produces vegetarian, vegan, and meat-less food products, has announced that it will go all vegan by 2021. Currently, the company has a consumption of 300 million eggs every year for the production of various baked goods such as bacon strips and sausage patties. These initiatives by major players ensure the significant demand for soy-based flour in the foreseeable future.

The growing working population and rapid urbanization surge the popularity and demand for meatless and healthy food, which, in turn, is boosting the market growth. Furthermore, numerous health benefits such as gluten-free and low cholesterol products help to reduce the risk of cardiovascular diseases as well as a reduction in menopausal symptoms and lower blood cholesterol. These health benefits are likely to boost the market growth in the foreseeable future.

Major companies are offering new products to gain a competitive edge in the market as well as to cater to the changing food preferences of the consumers. For instance, in February 2019, Otsuka Pharmaceutical Co., Ltd. has introduced ‘SOYJOY Crispy Sakura’, whole soy nutrition bars. These new products are anticipated to increase the scope of soy-based flour in the food industry over the forecast period.

The global market is consolidated in nature owing to the presence of some major manufacturers. Key manufacturers are taking innovative steps to gain the maximum customer base as well as to lead the gluten-free flour industry. For instance, in August 2018, Lightlife Foods, a company producing vegan meat substitutes, announced to expand its retail chain from the U.S. to the Canadian market. These strategies will boost market growth in the forecast period.

Major producers are increasing their geographical reach, especially in developed countries, to gain maximum technology penetration and customer reach. The establishment of R&D centers, coupled with strategic partnerships with investment companies to launch new innovative technologies as per the customer’s demand in the region, is anticipated to remain a critical success factor over the next few years. Taking into account all the above-mentioned factors, producers are likely to focus on technology innovation catering particularly to the developing countries and untapped market to gain the maximum market share.

This report forecasts revenue growth at the global, regional, and country levels and provides an analysis of the latest industry trends in each of the sub-segments from 2015 to 2025. For this study, Grand View Research has segmented the global soy flour market report based on product, application, and region: