The global space robotics market size was valued at USD 3.89 billion in 2019 and is expected to register a compound annual growth rate (CAGR) of 5.2% from 2020 to 2027. The need for efficient repair, service, and maintenance of geostationary satellites is bolstering the demand for space robots. Cost-effectiveness, better productivity, and the ability to perform in the extreme space environment are the prime factors driving the demand for space robotics technology. Moreover, the successful implementation of future space programs, such as on-orbit manufacturing and assembly in the International Space Station (ISS) and lunar surface innovation initiative by the National Aeronautics and Space Administration (NASA), requires sophisticated robotics systems. 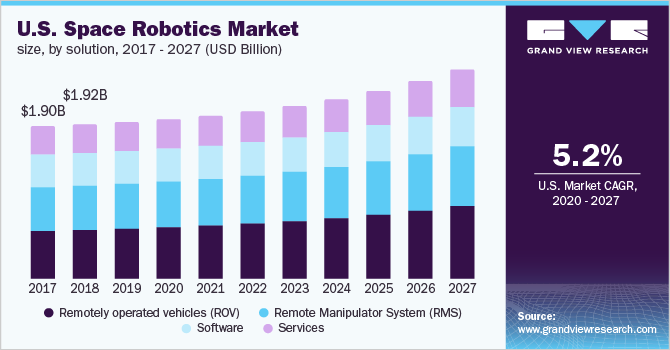 Factors, such as technological developments, the growing use of autonomous systems in space, and an increasing number of space programs, are expected to contribute to market growth. NASA has identified several robotics areas that are required in its space technology roadmap to 2035. Similarly, the European Space Agency (ESA) is planning technology roadmaps in space robotics through funding several projects by the European Commission, such as PERASPERA and SpacePlan 2020. Project PERASPERA aims at developing an integrated master plan for space robotics technology within the 2023-2024 timeframe. Other nations, such as China, Russia, India, and Japan, also announced their space programs involving robotics technology.

Robotics and autonomous systems are instrumental in the current and future space exploration missions. Space robots are mission-defined machines capable of performing several tasks, such as exploration, satellite servicing, and maintenance. The robots extend the human ability to operate and explore in space by providing greater handling capabilities to astronauts. Modern space robots represent a multi-disciplinary approach in the field of engineering and space science. As a result, the application base of space robotics technology has widened, ranging from assisting the crew to autonomously operating on a new planetary surface.

Emerging technologies, such as Artificial Intelligence (AI) and Deep Learning (DL), are widely being used in the robotics industry. Several organizations are developing AI-based robots that provide greater exploration benefits and enhanced mobility in space. These robots can operate with minimum human aid and perform highly complex tasks for a longer duration. In 2018, the German Aerospace Center (DLR) launched CIMON, an AI assistance robot to support astronauts in their daily tasks at ISS. Int-Ball is an AI-based robot developed by the JAXA to take automatic pictures and videos in the ISS. Int-Ball is successfully deployed and operational in the Japanese Kibo module of the ISS.

The services segment led the market in 2019 and accounted for the largest revenue share of over 38%. The segment will retain its dominant position; however, the Remotely Operated Vehicles (ROVs) segment is expected to register the fastest CAGR from 2020 to 2027. The ROVs segment is further categorized into rovers/spacecraft landers, space probes, and others. Rovers are the planetary surface exploration robots that are designed to perform several tasks, such as image capturing, planet exploration, digging, and data analysis & transmission. The upcoming space missions, such as Luna 25 by Roscosmos, Spacebit Mission One by the U.K., ALINA by Germany, and Mission One by NASA, are expected to drive the demand for rovers/spacecraft landers.

The Remote Manipulator System (RMS) segment is expected to register a significant growth rate over the forecast period. RMS can retrieve, deploy, and handle satellite payloads and assist astronauts in maintenance activities. The growing demand for space-based services, such as satellite servicing, surface mobility, de-orbiting services, and re-supply services, are expected to propel the RMS segment growth. RMS is further segmented into robotic arms/manipulator systems, gripping & docking systems, and others. Robotic arms are poised to witness significant growth in advanced space systems as they are used for assisting astronauts in lifting and handling heavy objects in space. Canadarm and Dextre are the two robotic arms that are presently attached to ISS.

The near-space application segment accounted for the highest revenue share of over 43% in 2019. Near space or orbital robots can be used for repairing satellites, assembling large space telescopes, and deploying assets in space for scientific exploration. The near-space segment is further segmented into space transportation and exploration, in-space maintenance, and others. The space transportation segment is expected to exhibit a strong growth rate over the forecast period owing to the demand for resupply for the ISS and servicing the existing geosynchronous satellites.

The deep-space segment is expected to register the maximum CAGR over the forecast period. Deep space robots or planetary robots play a vital role in observing, surveying, and extracting extra-terrestrial surfaces. The robotic system is crucial for deep space exploration programs to extend human reach into space, expand planetary access capabilities, and enhance human operation efficiency by supporting the astronaut crew in the space operations. Exploration robots, autonomous spacecraft, human-assistive robots, and piloted aircraft are some of the robotic systems that are gaining momentum in the market.

The government segment captured the largest revenue share of over 84% in 2019. Several R&D activities and satellite launches for defense & security purposes are escalating the demand for robotics technologies in this segment. Moreover, increasing emphasis on space and satellite technology for military & defense activities is driving the segment growth. Various governments are also funding R&D activities related to space and robotics applications. For instance, in 2017, the U.K. government aided the FAIR-SPACE Hub program for the development of robotics and AI for the space mission. The FAIR-SPACE Hub is working collaboratively with some private companies to enable future space robots to repair satellites, manufacture satellite parts in space, assemble large space telescopes, remove space debris, and deploy infrastructure. Such government initiatives and funding programs are creating growth prospects for the market. 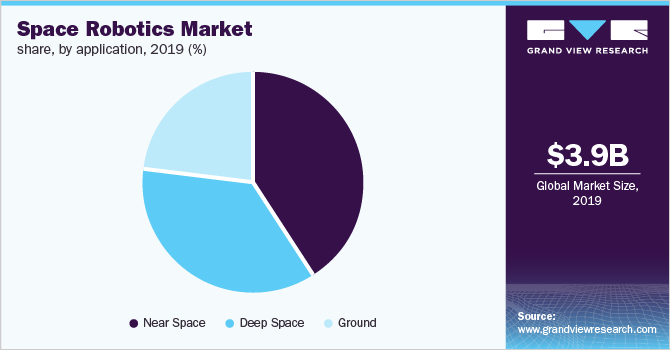 The commercial segment is estimated to register the fastest CAGR from 2020 to 2027 as commercial investments in space missions is increasing gradually. Private companies are continuing their successful mission to low Earth orbit, providing space transportation and space & flight support to International Space Station. The surge in demand for satellite servicing, refueling, and mission extension services provides new business opportunities to private companies.  Moreover, NASA is planning to end direct federal funding for the ISS by 2025 and adopt a commercial approach associating several commercial partners to the Moon and Mars mission. The government of India announced the formation of the Indian National Space Promotion and Authorization Centre (IN-SPACe) to promote and guide private companies in space business through favorable policies and encouraging regulatory environment. As a result, a new business model and space capabilities are expected to emerge in the private sector.

Recently, NASA awarded contracts worth USD 370 million to private companies for the moon exploration project. The contract is awarded to 14 different companies, including Lockheed Martin, United Launch Alliance, Intuitive Machines, Astrobotic, and SpaceX. Among these, Intuitive Machines is working on a robotic mission to the lunar surface, which is expected to be launched next year. All these factors are expected to drive the growth of the commercial segment over the forecast period.

North America accounted for the largest revenue share of over 41% in 2019. The regional market growth is attributed to the strong space capabilities of NASA and CSA. Both organizations are investing huge amounts in R&D and technology enhancement to execute space exploration initiatives. NASA is looking to build the in-space infrastructure for long-term space exploration and development of lunar gateway. This can be achieved by developing a complex lunar robotic mission. Moreover, this gateway provides the opportunity for commercial missions to the moon surface, which will help pioneer new technologies, such as robotic precursors for future human missions beyond Earth’s orbit, spaceflight systems, and crew mobility. All these projects for space and moon exploration add up to the industry development prospect.

Asia Pacific is estimated to be the fastest-growing regional market from 2020 to 2027. Asia Pacific is the first region to adopt a correlation approach of using geospatial information services and space technology to enhance resilience and mitigate disaster risk. The countries from the region are expected to work collaboratively through a regional action plan for a sustainable future. This helps countries with limited space capabilities, such as Mongolia, to work with space technology leaders, such as China, India, and Japan. Moreover, the upcoming space programs and exploration missions, such as Chandrayaan-3 by India and Chang'e 7 robotic lunar exploration missions by China, are expected to provide a new horizon to the regional market.

The competitive landscape of the market is changing rapidly. The conventional national organizations, such as NASA and ESA, are the market’s principal entities. However, commercial enterprises have showcased their intent and are entering the arena. Commercial enterprises are developing the means for space exploration and exploitation missions. Mars mission by SpaceX, asteroid mining by Bradford Space, and space tourism by Blue Origin are the commercial programs by private entities. Moreover, the participation of private players in the space industry can reduce the investment burden and enhance innovation. As a result, government organizations, such as NASA and ESA, are collaborating with the private firms for their space programs.

These companies are actively working on developing new solutions for exploration and transportation in space. For instance, Astrobotic Technology, Inc. established the Future Missions and Technology (FM&T) team to develop new robotics technology for future space missions. Altius Space is developing a new technique that can ease satellite operations, including refueling and repairing. Some of the prominent players in the global space robotics market include:

This report forecasts revenue growth at the global, regional, and country levels and provides an analysis of the latest industry trends in each of the sub-segments from 2016 to 2027. For the purpose of this study, Grand View Research has segmented the global space robotics market report on the basis of solution, application, organization type, and region:

How big is the space robotics market?

What is the space robotics market growth?

Which segment accounted for the largest space robotics market share?

b. North America dominated the space robotics market with a share of 41.47% in 2019. This can be attributed to the high demand for space robotics activities from prominent organizations, such as NASA and the Department of Defense due to the increasing reliance on space assets and for enabling safety in space operations.

Who are the key players in the space robotics market?

What are the factors driving the space robotics market?

b. Key factors that are driving the space robotics market growth include the growing demand for servicing existing geostationary satellites, debris removal, and technological advancements in autonomous systems.