Synthetic rubber has replaced natural rubber (NR) across a host of applications due to its inherent advantages in terms of stability and physical properties. Also, the weakening supply of natural rubber is leading to high volatility in prices. In light of this situation, it has become imperative to use alternate sources such as SBR.

The key raw materials for manufacturing SBR include styrene and butadiene. The major suppliers of these raw materials are Sinopec, Sibur, and China National Petroleum Corporation. Sibur and Sinopec have fully integrated petrochemical companies with a presence across the entire value chain, from petroleum refining to rubber & plastic manufacturing.

SBR is the largest consumer of butadiene, accounting for over 30% of the consumption. It is the majorly consumed synthetic rubber, which is expected to increase the utilization of butadiene over the coming years. The tire industry is expected to fuel market development over the forecast period.

Crude oil prices directly impact the prices of raw materials. Crude oil prices were at an all-time high in 2011, which reflected in butadiene prices that touched USD 3.0/kilo during the same period. However, the recent dip in the prices of crude oil has brought butadiene and styrene prices to record lows. These factors have led to a significant impact on SBR prices over the past few years.

The global demand for S-SBR in the footwear application was worth USD 194.1 million, in 2015. S-SBR is used in manufacturing as well as multicolor designing for shoe soles. The excellent smoothness exhibited by S-SBR can be used to manufacture good quality and long-lasting products, which is expected to augment the growth.

The global S-SBR demand in tire application accounted for a share of 80.6% in terms of revenue, in 2015. S-SBR is used in tire manufacturing on account of its inherent properties of abrasion resistance, which improves tire performance. Besides, the introduction of labeling regulations in various economies is anticipated to propel the utilization of the product over the forecast period. 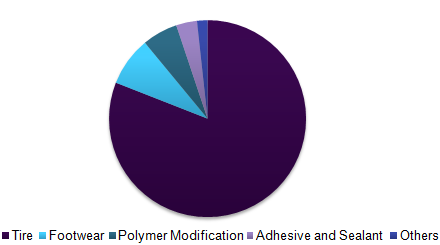 In 2015, adhesive applications accounted for a share of 3.7% of the global E-SBR demand in terms of volume. E-SBR is used to manufacture food container sealants, adhesives, and caulks. Its ability to be cured with various systems, such as sulfur, peroxides, and phenolic resins, is expected to drive the demand in the adhesive application.

E-SBR is majorly used in polymer modification of asphalt emulsions that are used in the manufacturing of chip seal and micro surfacing fix formulation. The high-temperature stability and low-temperature flexibility exhibited by the polymers modified using E-SBR are likely to drive the demand for E-SBR in this application.

Asia Pacific dominated the SBR market in 2015, accounting for 53.8% of the global demand in terms of revenue. The growing automobile industry in China, India, and Japan is expected to fuel the demand for tires, which in turn is expected to have a positive impact on the product demand over the coming years.

Europe accounted for a significant share of the market in 2015. The establishment of the EU labeling regulations in 2012 is likely to have a positive impact on the market over the coming years. Germany, Italy, and France are likely to witness a significant increase in the demand on account of rising tire production.

North America earned a volume share of 19.5% of the global styrene-butadiene rubber market in 2015. Factors, such as early adoption and saturation in the market, are likely to result in a moderate growth rate of the industry. The slowdown in the automobile industry in the U.S. is expected to impact SBR production over the future. However, the rising population in Canada and Mexico is expected to boost the overall consumption in this region.

The industry is fragmented in nature with 8 major companies accounting for over 55% of the market share. The manufacturers focus on the nature of the product as well as on the raw materials that are offered. Petrochemical companies, typically capable of processing materials in bulk quantities tend to gain an advantage over normal rubber companies.

The market is characterized by a high level of forwarding integration by raw material suppliers. Numerous petrochemical companies have a presence across the value chain wherein they produce crude oil and use it for the manufacturing of synthetic rubber.

This report forecasts revenue growth at global, regional & country levels and provides an analysis of the industry trends in each of the sub-segments from 2014 to 2025. For this study, Grand View Research has segmented the global styrene-butadiene rubber market based on application and region: