The global surgical drainage devices market size was valued at USD 1.8 billion in 2016 and is expected to witness a CAGR of 2.8% during the forecast period. Global increase in chronic diseases, a rise in the number of surgeries being performed, and a diverse product portfolio are some of the factors responsible for the growth. 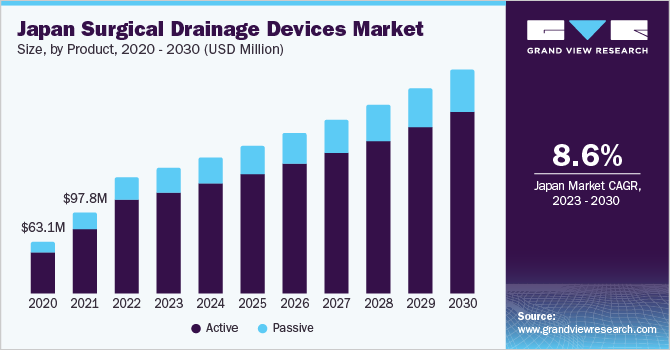 Global rise in chronic diseases has led to an immense demand for surgical drain devices. An increase in the number of surgeries has also resulted in the growth of the market due to the increasing usage of these devices in various applications. Another factor contributing to growth is the increase in smoking and alcohol consumption, which has resulted in the rise of cancer-related surgeries being performed. The majority of these surgeries involve the use of these devices to efficiently remove fluid and air buildup at the surgical site.

A wide range of devices is used to prevent the accumulation of fluids, such as blood, infected fluids, and pus. These devices are also used to reduce the buildup of air and in some instances, characterization of fluid. The usage of the type of drains depends on the surgery being performed. A large variety of drains are easily available in various sizes and shapes for different kinds of surgeries.

ABThera, developed by Acelity is a product that uses negative pressure to remove peritoneal fluid and helps in the reduction of edema in abdominal surgeries. Thus, there is a wide range of products that are used specifically for certain procedures, which help physicians and patients on various levels.

Rise in medical tourism in countries like Brazil, India, Turkey, and Malaysia has allowed patients to undergo surgical procedures at reduced rates and with detailed medical surveillance. This is expected to further boost the market in these countries. These procedures also require the use of customized drainage devices for specific conditions, which may further propel growth.

The surgeon performing the surgery chooses the drain based on the type of surgery being performed. Active drains are not exposed to the atmosphere thereby, preventing the growth of bacteria. They are competent in keeping the wound dry and remove fluid efficiently. For instance, Altitude Dry Suction Chest Drainage Unit is a device developed by Medtronic to remove accumulated fluid using wall suction in cardiothoracic surgeries.

Despite the availability of active drains, passive drains are preferred by surgeons as they allow easy removal of the buildup of air and fluid in the surgical incision. One of the added advantages of using passive drains is that they cause less discomfort & pain during drainage and also prevent excessive mechanical tissue injury.

Thus, with an increase in the prevalence of chronic and other diseases like osteoporosis and arthritis, the usage of active surgical drain devices has been increasing in various end-use settings. Although the benefits of using active devices are more than passive drainage devices, the usage of passive drain devices in various applications has allowed these products to penetrate the market at a higher level.

The market, on the basis of application, is divided into cardiothoracic surgeries, neurosurgeries, abdominal surgeries, orthopedics, and others. In 2016, cardiothoracic surgeries accounted for the largest share owing to an increase in the prevalence of cardiovascular diseases. According to the World Health Organization, cardiovascular diseases are the leading cause of death globally, and in the year 2012, resulted in the deaths of an estimated 17.7 million people. This has generated demand for chest drainage systems that allow easy and efficient removal of fluid from the chest.

An increase in the number of surgeries being performed has resulted in the growing adoption of surgical drainage devices that are specifically designed for cardiovascular surgeries. For instance, Pleur-evac Chest Drainage System developed by Teleflex Incorporated is a device that aids in the efficient removal of fluids during cardiothoracic surgeries.

According to the American Academy of Neurology, in the U.S., stroke and Alzheimer’s disease ranked as the third and sixth leading cause of death, respectively. These facts are indicative of an alarming increase in neurological disorders that often require surgical intervention upon diagnosis. This rise has, thus, contributed to the increase in demand for drains that are used post neurological surgeries.

Various developers have designed surgical drain devices that can specifically be used in abdominal surgeries. For instance, ABThera Open Abdomen Negative Pressure Therapy System developed by Acelity is designed to provide medial tension that helps minimize fascial retraction and reduce swelling at the site. Thus, increasing the adoption of drains in abdominal surgeries has also been contributing to the overall growth of the market.

Drains are used in orthopedic surgeries for removal of any sort of abscess and to reduce the risk of contamination by bacterial growth in the fluid buildup. The rise in musculoskeletal diseases as well as orthopedic trauma, globally, can also be attributed to the increase in the number of surgeries being performed. This segment thus is expected to witness lucrative growth over the forecast period.

According to the Agency for Healthcare Research and Quality, in 2014, over 17.2 million hospital visits included at least one surgery. In 2013, injuries accounted for USD 671 billion in the U.S. Treatment of trauma requires surgical intervention, which has increased the use of surgical drainage devices in hospitals.

Specialty clinics have witnessed immense growth as they offer customized services according to the requirements of patients. Therefore, the growing usage of these devices has allowed the growth of this segment.

In 2016, North America held the largest revenue share in the market. Increasing R&D investments and supportive government initiatives directed toward the reduction of chronic diseases globally can be attributed to the growth of the market.

Asia Pacific is expected to grow at the fastest CAGR during the forecast period due to the increasing penetration of healthcare companies that are investing heavily in the region. Changing healthcare reforms are contributing to the growth of the market by allowing the commercialization of new products.

The incremental increase in the incidence of chronic diseases has been witnessed in Asia Pacific countries like India, China, Japan, and Indonesia, which has been adding to the healthcare burden in the region. As a result of this increase, a large number of surgeries are being performed, which is consequently expected to accelerate the growth of the market.

Latin America region has also been witnessing an increase in the prevalence of chronic diseases, which is increasing the healthcare expenditure of the nations in the region. Increasing the incidence of chronic diseases has also been accelerating the growth of surgical drainage devices that are used for efficient removal of fluid and air buildup in postsurgical procedures.

Some of the key players include Acelity; Teleflex Incorporated; Cardinal Health; Medtronic; Cook Medical; and Stryker. The market is highly fragmented with the presence of many large-, small-, and medium-scale players. These leading players face competition from local players.

The majority of the players are focusing on the development of new products. For instance, in May 2015, Cardinal Health announced the launch of its Negative Pressure Wound Therapy (NPWT) portfolio. New products, Cardinal Health SVED and NPWT PRO were launched with an intention to provide better management of chronic & acute wounds.

This report forecasts revenue growth at global, regional & country levels and provides an analysis of the industry trends in each of the sub-segments from 2014 to 2025. For the purpose of this study, Grand View Research has segmented the global surgical drainage devices market on the basis of product, application, end-use, and region: