The global synthetic lubricants market size was valued at USD 4.40 billion in 2018 and is projected to expand at a CAGR of 5.1% from 2019 to 2025. Growing demand from automotive manufacturers is expected to have a positive impact on the market growth over the forecast period. These group of chemicals has numerous applications in the automotive sector in the form of diesel engine oils, gearbox lubes, and transmission oils in passenger and commercial vehicles and motorcycles. Superior performance offered by synthetic lubricants over their mineral counterparts, in terms of high temperature operation range, low friction, and higher load carrying capacity, will boost their demand further.

Rising demand from the automobile and industrial segments in Asia Pacific due to new machine installations and increased production of branded cars is also expected to augment the demand. In addition, technological advancements, such as the NSF food lubrication standard set by major equipment builders for the use of synthetic lubricants in the food industry, is expected to boost synthetic lubricants market growth. Europe led the global market in the past due to high product from Germany due to the presence of automotive production base in Germany. The regional market is projected to maintain its dominance during the forecast years due to rising demand for environmentally sustainable, premium products with high-performance. 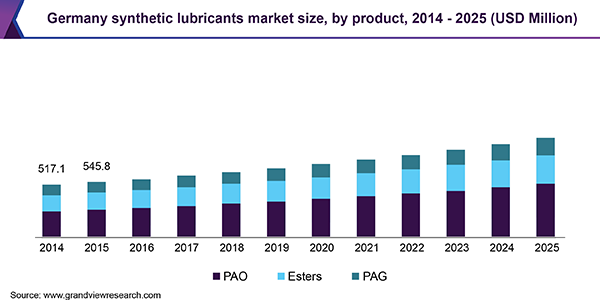 Reduction of viscosity in synthetic lubricants reduces engine friction, which, in turn, enhances fuel efficiency. Thus, increasing demand for vehicles with improved fuel economy is predicted to drive the market further. Manufacturers are developing new products with technologies that make them further suitable in different equipment with extreme temperatures and pressures. However, preference for cheaper substitute mineral oils due to high cost of these synthetic oils may hamper market growth. Rising need for reducing maintenance costs in the manufacturing sector is expected to trim down the scope of synthetic lubricants. Incompatibility of Polyalkylene Glycol (PAG)-based oils with Polyalphaolefins (PAOs) and conventional mineral oils is also expected to create obstacles for market growth.

Furthermore, performance of PAG-based oils is significantly affected by water reactivity and this is expected to have a negative impact on its demand. Fluctuating prices of crude oil coupled with diminishing oil reserves have forced manufacturers to focus on developing new techniques as well as new sources for raw material production. Advancement in hydraulic fracturing technology and development of new techniques, such as Enhanced Oil Recovery (EOR), has increased oil & gas output. This trend is particularly observed for reserves present in U.S. and Canada. As a result, shale gas and tight oil has emerged as an alternative for providing naphtha, which can be processed to form ethylene oxides.

Globally increasing expenditure on automobiles has been a key pillar to the market growth. Automotive manufacturers are becoming more consumer centric in their business approach thereby manufacturing high-performance vehicles that incurs minimum maintenance cost over longer duration of productivity.

Esters are anticipated to be the fastest-growing product segment over the forecast period. Growing demand for ester-based synthetic lubes in reciprocating compressors is one of the major factors driving the segment. Ester-based lubricants are more stable at high temperatures as compared to PAO and are increasingly used in jet engines. They are also used in gearboxes, reciprocating compressors, and hydraulic power packs.

Polyalkylene glycol (PAG) is expected to be the second fastest-growing segment owing to its rising application in the production of food-grade and metal working fluids. Biodegradability of PAG encourages its usage in environmentally sensitive applications. Rising focus on reducing the carbon footprint is likely to boost the demand for PAG-based lubricants.

Engine oil segment led the global market in 2018 and is projected to expand further over the forecast period. On the other hand, Heat Transfer Fluids (HTFs) are estimated to register the highest CAGR from 2019 to 2025. These fluids play an important role in oil & gas processing from upstream to the downstream sector, which covers the processing of crude oil or natural gas, transportation and refining. Companies, which reprocess and recycle used lubricating oils, utilize a large amount of HTFs. Transmission fluids are also highly preferred in the automotive sector.

These liquids enhance the performance of brake band friction, valve operation, gear lubrication, and torque conversion. They are used as hydraulic fluids and lubricants in power steering and 4WD transfer cases respectively. Rising automotive vehicle sales are expected to be a key factor driving the HTF segment. However, increased scope of application of mineral counterparts as transmission fluids is expected to slow down the growth. 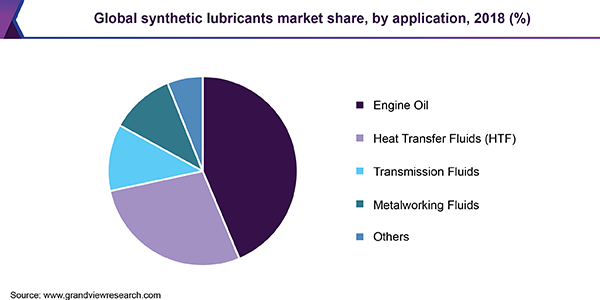 Europe led the global market and will continue the trend during the forecast years. Major factors driving the Europe market include increased focus on fuel economy and CO2 reduction, manufacturing sector recovery, regional base oil supply, and product quality improvement. Various environmental, health, and safety regulations laid down by the European Union may pose a challenge to the market growth. Increasing sales of premium vehicles in Asia Pacific is expected to drive the market in this region. The market in Asia Pacific is highly capital intensive and is majorly dependent on publicity and product innovations. It is dominated by a few oil companies producing synthetic lubes with extensive distribution networks. Refinery businesses in Asia Pacific, specifically in India, China, and Singapore, have capitalized on low crude oil prices, which have impacted in increased production in petrochemicals in the region.

British Petroleum, Chevron Corporation, Lanxess AG, Valvoline, Fuchs, Pennzoil, Kendall, Motul, Amsoil, and Agip are some of the leading companies in the global market. Most of these companies are focusing on strengthening their presence in potential and emerging markets of Asia Pacific by establishing new plants and entering into strategic collaboration with local partners. Over the past few years, companies, such as ExxonMobil, Shell, and Total, have formed strategic partnerships with gearbox manufacturers, such as Bonfiglioli, Stäublito, and Shanthi, where the latter set of companies have recommended synthetic gear lubricants use.

The industry is highly dominated by presence of several multinationals that drive industry growth in terms of product quality, new product launches and more. Companies are significantly trying to attain maximum consumer base by innovating product lines that meet the current market trends. With efforts from synthetic lubricant manufacturers to extend vehicle performance life as well as minimize recurring costs associated to maintenance, the industry is expected to grow significantly over the foreseeable future.