The global syringes market size was valued at USD 13.5 billion in 2018 and is expected to grow at a compound annual growth rate (CAGR) of8.5% from 2019 to 2026. The demand for syringes is on a rise owing to the increasing prevalence of chronic diseases, rising demand for vaccines and immunization, technological advancements, and growing adoption of injectable drugs. 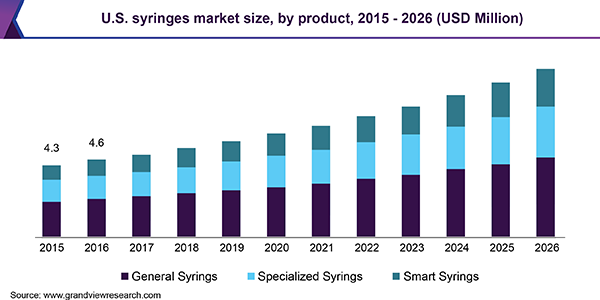 Increasing number of surgical procedures are also anticipated to drive the market over the forecast period. Syringes are used in every kind of surgeries for injecting solutions and withdrawing secretion from the body. Anesthesiology is the most common procedure followed during surgeries, in which the patient is injected with drugs for comfortable and pain-free surgeries. Rising prevalence of chronic diseases, such as cancer, diabetes, and autoimmune diseases, is one of the key factors leading to an increase in the number of surgeries. Unhealthy lifestyle, lack of physical activity, alcohol abuse, and smoking are some of the major factors contributing to growing prevalence of such diseases. According to CDC estimates, in 2017, more than 100.0 million people were living with diabetes or prediabetes in the U.S. Insulin syringes are majorly used in the treatment of diabetes.

Type II diabetes is the most common type of diabetes among the affected population. For instance, as per the U.S. Department of Health and Human Services, in 2019, more than 30.0 million Americans have diabetes of which 90.0% to 95.0% have type II diabetes. Diabetic foot ulcer, a common complication of diabetes, typically requires surgical intervention to prevent foot amputation. As per the study Diagnosis and Management of Diabetic Foot Complications by the American Diabetes Association, the annual incidence of diabetic foot ulcer is 2.0% and lifetime risk is 15.0% to 20.0% in most of the western countries. Thus, increasing number of surgeries is expected to drive the growth of the market.

Key companies are also introducing technologically advanced products to strengthen their foothold in the market. For instance, Regeneron Pharmaceuticals launched Eylea (aflibercept) Injection prefilled syringe, which was approved by the U.S. FDA in August 2019. It is a single dose pre-filled syringe that requires fewer preparation steps compared to vials. It is indicated for the treatment of diabetic retinopathy, diabetic macular edema, wet age-related macular degeneration, and macular edema following retinal vein occlusion.

Cancer is a huge healthcare burden, globally, as it is the second leading cause of deaths. According to the CDC, about 1,658,716 new cases of cancer were reported in the U.S. in 2016. Chronic diseases are also a major healthcare concern in the U.S. with over half of the adult population suffering from such diseases, contributing to over 75% of the total healthcare cost in the country. Syringes are used during various stages of cancer treatment. Therefore, these factors are likely to accelerate market growth during the forecast period.

On the basis of product, the market has been segmented into general, specialized, and smart syringes. General syringes held the largest market share in 2018 and is anticipated to witness a significant growth over the forecast period. The growth of this segment is attributable to its regular usage in vaccination and tetanus. Thus, increasing birth rate in developing countries is anticipated to increase the demand for vaccines, thereby propelling the growth of the syringes market.

Based on usage, the market has been categorized into reusable and disposable syringes. Disposable syringes held the largest market share in 2018 and is anticipated to witness the fastest growth over the forecast period. These syringes are majorly recommended by the doctors to reduce the risk of infections and any harmful diseases. Some of the key players offering disposable syringes are BD, Thomas Scientific, Smiths Medical, and B. Braun Melsungen AG.

The disposable syringes segment has been further sub-categorized into empty and prefilled syringes. Empty syringes held the largest market share in 2018 as they are multi-purpose syringes and can be used for various drug delivery. Pre-filled syringes are anticipated to witness the fastest growth over the forecast period as the key companies in market are launching various technological advanced products in this category.

The hospital segment held the largest syringes market share in 2018 owing to the rising number of patients suffering from various chronic diseases. For instance, as per the CDC, six in ten Americans are suffering from some kind of chronic disease such as cancer, diabetes, stroke, and heart disease. Moreover, increasing number of surgical procedures is also anticipated to boost the market growth. 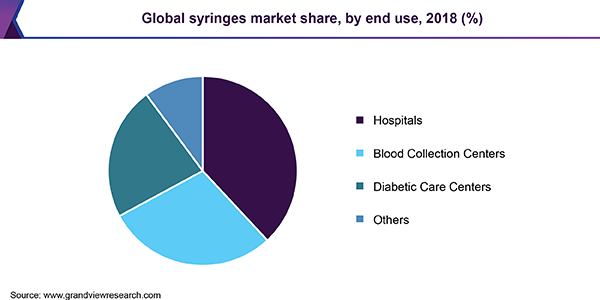 The diabetic care centers segment is anticipated to witness the fastest growth over the forecast period owing to the rising prevalence of diabetes across the globe. For instance, as per the American Diabetes Association, in 2015, approximately 30.3 million Americans were diagnosed with diabetes and 7.2 million were undiagnosed. Such instances are anticipated to boost the growth of the segment over the forecast period.

North America dominated the market for syringes in 2018. Increasing cases of chronic diseases, rising demand for technologically advanced medical products, and presence of major players in this region is expected to drive the market growth. The key players operating in the North America market are BD; Smiths Medical; B. Braun Melsungen AG; Thomas Scientific; McKesson Medical-Surgical Inc.; and Cardinal Health.

Key players are adopting various strategies such as merger and acquisitions, product launch, and partnerships to strengthen their foothold in the market. For instance, in October 2019, BD launched Intevia 1mL two-step disposable autoinjector, which comprises autoinjector and pre-fillable syringe in one integrated system. Some of the prominent players in the syringes market include:

This report forecasts revenue growth at global, regional, and country levels and provides an analysis of the latest industry trends in each of the sub-segments from 2015 to 2026. For the purpose of this study, Grand View Research has segmented the global syringes market report on the basis of product, usage, end use, and region:

How big is the syringes market?

What is syringes market growth?

Which region accounted for the largest syringes market share?

b. North America dominated the syringes market with a share of 43.23% in 2019. Increasing cases of chronic diseases, rising demand for technologically advanced medical products, and presence of major players in this region is expected to drive the market growth.

Who are the key players in the syringes market?

What are the factors driving the syringes market?

b. Key factors that are driving the market growth include increasing prevalence of chronic diseases, rising demand for vaccines and immunization, technological advancements, and growing adoption of injectable drugs.