The global tactical footwear market size was valued at USD 1.59 billion in 2019 and is expected to grow at a compound annual growth rate (CAGR) of 5.1% from 2020 to 2027. Demand for tactical footwear is primarily driven by law enforcement professionals, firefighters, military service members, and adventure enthusiasts operating in harsh and climatic conditions. For instance, according to the U.S. Defense Department data, in March 2019, in the Middle East, there were 60,000 military troops present in Afghanistan, Iraq, and Syria and this number is expected to increase in the near future, which will generate demand for military essentials and tactical boots, fueling the growth of the market. These footwear are typically designed to operate in extreme environments without any wear and tear. 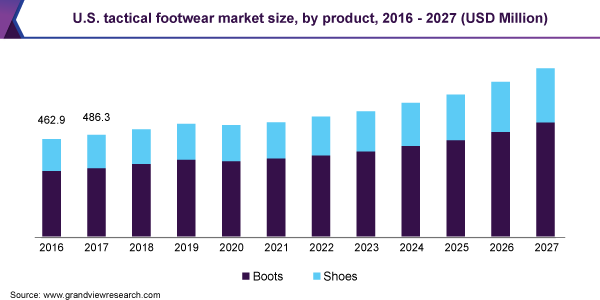 Apart from military operations, tactical footwear is also used in extreme sports, hunting, mountaineering, and rocky terrain sports. Tactical footwear comes with the enhanced insole and outsole cushioning, making it suitable to restrict impact and strain placed on the feet while running, jumping, or walking long treks. Renowned manufacturers such as Maelstrom Footwear and Bates Footwear offer patented technology to promote the capability of their tactical shoes and gain a competitive edge over others. For instance, Bates Footwear provides Vibram technology, which ensures the outsole provides grip and traction in uneven terrains.

Many established brands have also been launching tactical boots, tactical sneakers, and tactical shoes for both men, women, and children, keeping in mind the premium category footwear owing to the increase in demand. For instance, in February 2020, 5.11 launched A.T.L.A.S. (All Terrain Load Assistance System) tactical footwear collection in Las Vegas, Nevada. The collection consists of three styles 8-inch boots, mid hiker, and trainer with new features, such as ortholite footbed, slip and oil-resistant outsoles, and breathable uppers for comfort.

Similarly, other famous companies in the market are offering products based on professional requirements with an enhanced range of technologies. For instance, Under Armour provides a different product category named as military and tactical boots in which it offers mid-ankle, high inch boots. Some of the famous products in this category are Valsetz RTS 1.5 waterproof tactical boots, which have UA ClutchFit ankle support system technology that contours and provides support.

Covid-19 has had a severe impact on the footwear industry because of the disruption of supply chains and the shutdown of retail outlets, which completely destabilized the footwear industry, thereby reducing sales. According to The European Textile, Clothing, Leather, and Footwear (TCLF) Association, in the first quarter of 2020, Italy’s footwear exports registered a 14.7% decline compared with the same period in 2019.

In addition, the pandemic condition has driven citizens to invest more responsibly and stop extravagant expenditures. However, in every region, more military personnel are deployed to control the outside situation, which, in turn, demands the military essentials and is expected to resuscitate the product demand to a certain extent. For instance, in April 2020, Garmont Outdoor, an Italy-based footwear manufacturer, donated 1,000 pairs of tactical boots to New York City first responders.

The tactical boots segment led the market and accounted for 68.5% share of the global revenue in 2019. Increasing product technology innovation and product launches have been fueling the segment growth. For instance, in January 2018, TBL Licensing LLC’s brand Timberland officially released the collection of FlyRoam tactical boots with the use of technologies, such as the Aerocore energy system, which helps to provide extra cushioning and tries to keep the boots lightweight.

In addition, tactical boots are popular for military use and are used by soldiers who had to operate in harsh climates. Over the period, the product demand has increased due to a worldwide increase in military operations. Tactical boots have been made available in different styles to suit the application of the products, such as jump boots, tanker boots, jungle boot, desert boot, and ice waterproof tactical boots for extreme cold.

The tactical shoe segment is expected to expand at the fastest CAGR of 5.2% from 2020 to 2027. These shoes are majorly preferred by hunting, hiking, and extreme sports enthusiasts, who are looking for protection from sand‚ mud‚ water‚ and difficult terrain. Constant product launches have been fueling the segment growth. For instance, in January 2019, 5.11 Boots launched Norris tactical Sneakers in black multicam made with welmax board, which guards feet against up to 1,200 newtons of force. The product has vibram outsole with XS trek that provides optimal balance, durability, and comfort.

Offline distribution channels dominated the market and accounted for 76.7% share of the global revenue in 2019. This channel majorly includes outlets such as sporting goods chains, independent and specialty retailers, department store chains, and institutional athletic departments. Consumers prefer buying tactical footwear from offline stores to find the right fit and comfort. Moreover, it helps them to understand the benefits and functionality of shoes and choose from the available variety of cushioning and materials available. There are a variety of high ankle, mid-ankle, and low ankle tactical shoes available in the market for different applications and work. 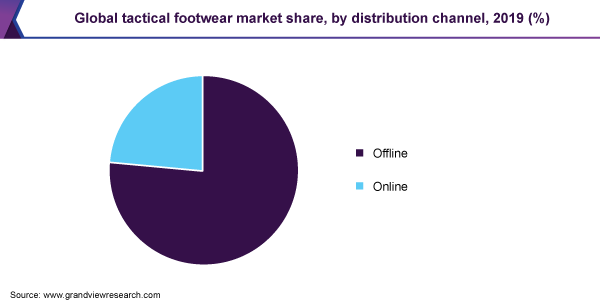 The online sales channel is expected to witness the fastest growth over the forecast period. The major factors fueling the growth of this segment are increasing internet penetration, door-step delivery facility, easy exchange offer, and hassle-free payment option provided by the e-commerce companies. In addition, internet-savvy millennial consumers have been actively driving e-commerce sales.

North America dominated the market for tactical footwear and accounted for 38.7% share of the global revenue in 2019. The presence of a large number of established manufactures, such as Under Armour, Inc., Adidas AG, and Maelstrom Footwear, coupled with increasing interest in outdoor physical activities among people, such as mountain climbing, hiking, trekking, and wildlife camping, has been driving the demand for tactical footwear in the region.

In addition, rising demand for tactical boots due to increasing military operations conducted by countries, including the U.S., across the globe has been driving the demand in this region. For instance, according to United States Central Command, as of January 2020, there are close to 60,000 to 70,000 troops stationed in the Middle East region.

Asia Pacific is expected to witness the fastest growth over the forecast period. An increase in government intervention to counter riots, protests, and disaster management operations is expected to drive the demand for tactical footwear in the region. For instance, in 2020, democratic reform issues in Hong Kong have led to the employment of more than 12,000 Chinese troops to control the situation. In addition, countries including China have a large number of companies, such as China Xinxing and Jinjiang Tonghua Shoes Co., Ltd., offering customized tactical footwear at competitive pricing, thereby driving the demand.

Prominent market players are likely to focus on establishing their businesses in the Asia Pacific owing to rapidly expanding customer base in countries, such as India and China. In this respect, key market participants are expected to invest in research & development activities to remain competitive over the forecast period. Some of the prominent players operating in the tactical footwear market are:

This report forecasts revenue growth at the global, regional, and country levels and provides an analysis of the latest industry trends and opportunities in each of the sub-segments from 2016 to 2027. For the purpose of this study, Grand View Research has segmented the global tactical footwear market report on the basis of product, distribution channel, and region:

How big is the tactical footwear market?

What is the tactical footwear market growth?

Which region accounted for the largest tactical footwear market share?

b. North America dominated the tactical footwear market with a share of 38.7% in 2019. This is attributable to increasing participation in outdoor activities such as mountain climbing, and hiking.

Who are the key players in the tactical footwear market?

What are the factors driving the tactical footwear market?

b. Key factors that are driving the market growth include increasing demand from law enforcement professionals, firefighters, and military service personnel, rising adventure sports trends among consumers, and the rising popularity of e-commerce platforms.