The global tahini market size was valued at USD 1.24 billion in 2018 and is projected to expand further at a CAGR of 5.2% from 2019 to 2025. The rising popularity of ethnic Middle Eastern delicacy including hummus, falafel pitas, baba ghanoush, and another authentic cuisine on a global level is expected to remain a prominent factor driving the product demand. Furthermore, increasing usage of sesame seed-based tahini in salads, energy shakes, etc. is projected to have a strong impact on market growth. 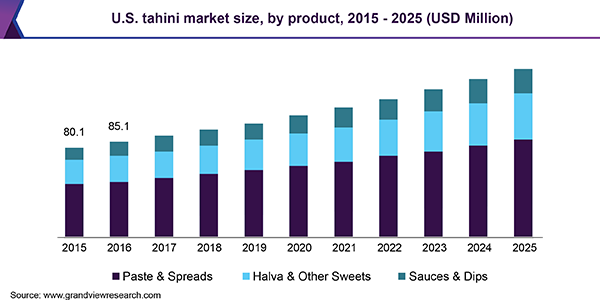 The increasing popularity of Arabic cuisine across developed countries including the U.S., Germany, and the U.K. is the key driver for market growth. Increased consumption of sesame-seed based tahini as a key food ingredient owing to its health benefits, such as skin detoxification and prevention of Rheumatoid Arthritis (RA), and premature graying of hair.

The product has a wide scope of application in numerous products including confectioneries, bakeries, sauces, dips, and salad dressings. The availability of a wide range of products including vegan, gluten-free, non-GMO, Kosher, with zero artificial preservatives, etc. will boost the product demand further.

Also, the manufacturers are adopting various marketing strategies and promotional activities for targeting the untapped regions across the globe, which will have a positive impact on the overall market growth. The Middle East & Africa generated the largest revenue share in 2018. However, North America is projected to be the fastest-growing regional market at a CAGR of 6.8% from 2019 to 2025.

Sauces & dips are expected to be the fastest-growing product segment at a CAGR of 5.6% from 2019 to 2025 on account of extensive product application scope. Moreover, rising living standards and growing awareness about the nutritional benefits associated with essential fatty acids, magnesium, phosphorous, and Vitamin B1 contents are expected to drive the segment further.

Paste & spreads segment is expected to generate revenue of more than USD 985 million by the end of 2025. Manufacturers are launching new products to cater to the increasing demand. For instance, in August 2018, AllThatDips Company launched an exclusive range of Tahini paste in India for different applications, such as spread, dip, cooking sauce, and salad dressing, under the brand name ‘Beef’.

Offline was the largest distribution channel segment in 2018. These channels include hypermarkets, supermarkets, exclusive or brand outlets, convenience stores, and unorganized retail segment. Over the past few years, major supermarkets including Walmart and 7-Eleven have been investing more in developing countries, such as India, Thailand, and Taiwan, targeting the untapped regions. For instance, in February 2019, 7-Eleven, one of the largest convenience store chains, formed an agreement with Future Group to launch its first series of stores in India. Furthermore, according to The Wall Street Journal report published in March 2019, Amazon is launching a brand new range of grocery stores across major cities of the U.S. 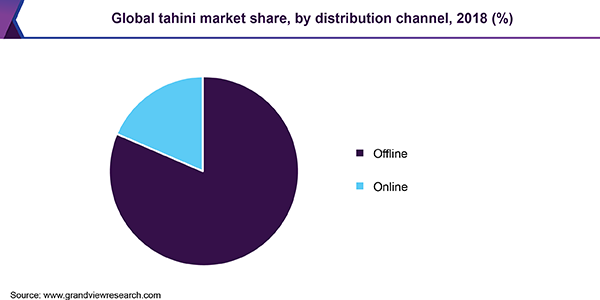 Moreover, the company already signed leases for three stores at different locations in the U.S. These initiatives are expected to expand the offline segment over the next few years. Online channel is estimated to be the fastest-growing segment at a CAGR of 5.5% from 2019 to 2025 due to growing number of internet users in developing countries, such as China, India, Thailand, Brazil, and Mexico. Besides, the majority of e-commerce companies including Flipkart and Amazon provide discounts and unique offers to propel the sales.

The Middle East & Africa was the largest market in 2018 and will retain dominance throughout the forecast period. Israel, Saudi Arabia, Jordan, Lebanon, and Oman are the key revenue-generating countries in this region. Increased consumer disposable income levels and favorable government policies for infrastructure development are expected to offer growth opportunities for the market.

North America is expected to be the fastest-growing market at a CAGR of 6.8% from 2019 to 2025. The increasing popularity of Middle Eastern and Mediterranean cuisines coupled with rising demand for ethnic Arabic flavors in the region is expected to spur the market growth. Moreover, constant product innovation is projected to drive the demand further. For example, in March 2018, Soom Foods, LLC launched two innovative tahini squeeze packets in the dips & spreads segment.

This report forecasts revenue growth at global, regional, and country levels and provides an analysis of the latest industry trends in each of the sub-segments from 2015 to 2025. For this study, Grand View Research has segmented the global tahini market report based on the product, distribution channel, and region:

How big is the tahini market?

What is the tahini market growth?

Which segment accounted for the largest tahini market share?

b. Middle East & Africa dominated the tahini market with a share of 42.4% in 2019. This is attributed to rising consumers' spending in countries such as Israel, Saudi Arabia, Jordan, Lebanon, and Oman.

Who are the key players in tahini market?

What are the factors driving the tahini market?

b. Key factors that are driving the market growth include rising popularity of ethnic Middle Eastern delicacy and increasing usage of sesame seed-based tahini in salads, energy shakes.