The global telepresence equipment market size was estimated at USD 1.87 billion in 2016 The need for the enterprises to reduce the cost of traveling for the employees is the primary factor driving the market growth.

Increasing usage of telepresence equipment in various applications such as healthcare, education, and government are the primary factors driving the market growth. Many government authorities are also planning to establish telepresence rooms as services as one of the avenues for revenue. Telepresence video conferencing is being increasingly adopted by many organizations as it offers cost-effective solutions of high-quality interaction.

The room-based system is the highest revenue-generating segment over the forecast period due to increased use of enterprises. Virtual presence of the individuals in the meeting will enhance experience thereby reducing the cost of traveling. But the high cost of installation is one the major restraint for the growth of the market. This equipment is increasingly adopted in the North America region which occupies significant market share over the forecast period.

Many of the large corporations and various small and medium enterprises prefer installing telepresence video conferencing equipment as it offers a realistic way of interaction between the participants by avoiding the time-lag and disruption in video conferencing. Many of the telepresence equipment providers provide equipment, technology, and customer support which are already included in the price thereby enhancing the user experience. 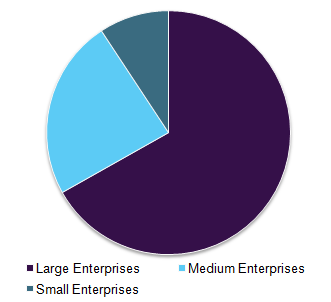 Telepresence equipment is primarily used in many of the large enterprises which are into various sectors such as healthcare, education, and government. The healthcare industry occupies the majority of the market share followed by the government segment. Large enterprise is expected to have a signification growth rate over the forecast period, growing at a CAGR of 3.0% from 2016 to 2025.

North America is followed by Europe, which accounted for over 25% of the total revenue share in 2016.

This report forecasts revenue growth at global, regional & country levels and provides an analysis of the latest trends and opportunities in each of the sub-segments from 2014 to 2025. For the purpose of this study, Grand View Research has segmented the global Telepresence Equipment market based on End-user, Type, Form factor Vertical and Region: