The global tendon repair market was valued at USD 2.1 billion in 2021 and is expected to exhibit a compound annual growth rate (CAGR) of 7.5% during the forecast period. Multiple tissue injuries are more common in the elderly. According to U.N. by 2050, people over sixty will account for more than 20% of the world population. A rotator cuff injury affects more than 40% of the total population aged sixty and up, according to an article published in the Advances in Orthopedic Surgery journal. Modernization has brought about changes in lifestyle and lack of physical activity, among other things, making the population more vulnerable to musculoskeletal problems and diseases. According to the World Health Organization (WHO) report of 2021, musculoskeletal conditions affect approximately 1.71 billion people worldwide. Low back pain is the most common musculoskeletal condition, affecting 568 million people worldwide. 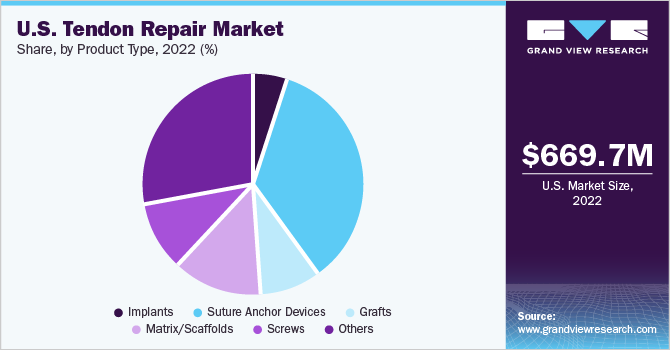 Tendon rips, fissures, sprains, and tensions have become more common due to the population's sedentary lifestyle. Obesity causes several ailments, the most frequent cardiovascular disease, and osteoarthritis, a degenerative joint condition. Obesity affects almost one billion individuals worldwide, including 650 million adults, 340 million teenagers, and thirty-nine million children. This figure is still rising. According to the World Health Organization (WHO), in 2022, about 167 million children and adults will be overweight or obese by 2025, putting their health at risk.

During the projection period, the rise in the incidence of sports-related injuries and the rapid growth in the number of athletes will be important impact-rendering drivers for the market. According to a John Hopkins Medicine article, thirty million individuals participate in organized sports, resulting in more than 3.5 million sports injuries annually in the United States alone, with sprains and strains being the most prevalent ailments. Sports injuries such as rotator cuff injuries, tennis elbow, and joint dislocation are more common in high-contact sports such as football.

Repetitive movements (in sports) and strains in sports such as tennis and water sports can also lead to sports injuries such as rotator cuff injuries, tennis elbow, and joint dislocation. Soccer, indoor track events and cross-country races caused the most lower leg injuries, according to an article published in the American Orthopaedic Foot & Ankle Society. Men were more susceptible than women to suffer from Achilles tendon injury.

According to the National SAFE KIDS Campaign and the American Academy of Paediatrics, more than 3.5 million children aged fourteen and younger get injured annually playing sports or participating in recreating activities. Football, basketball, pedal cycling, soccer, ice or roller skating, and skateboarding were the most common sports, with lower extremity injuries being more common in older age groups. The Orthopaedic Journal of Sports Medicine study showed that wearing a knee brace did not hinder physical performance. According to the estimates of a study published by Stanford Children's Health in 2020, 30 million children and teenagers participate in sports annually.

According to Accident and Emergency (A&E) statistics, 24.8 million sports injuries were recorded in 2019, an increase of 2% compared with 2018. According to the American Hospital Association, currently, there are around 6,146 community hospitals in the United States. Furthermore, the increasing number of road injuries related to the sprains in the tendons is expected to drive market growth. Fatalities for 2020, according to the European Commission for Road and Mobility, will be released once preliminary numbers are released. An estimated 18,800 people were killed in a road crash last year. The data procedure is for April 2021, which shows an unprecedented annual fall of 17% from 2019.

Invasive surgeries are being phased out in favor of minimally invasive treatments, in which tendon repairs are conducted using cutting-edge technology to reduce surgery time and recovery time. In sports medicine, new treatments and techniques emphasize stability in repair surgeries and reconstructions, as well as excellent mobility of the reconstructed limb or joint. Robotic surgery is a growing concept in sports medicine that aims to reduce injury to surrounding tissue while also improving surgical precision.

Several companies in the industry have recorded a reduction in sales of tendon restoration products. New technologies, such as tissue grafting, scaffolds, and other tissue matrices, and equipment, parts, and instruments used in operations for the regeneration of native tissue, are being effectively used to provide the repaired limb with better movement and flexibility and speed up healing. Techniques that do not require surgery, new and improved analgesics, and physical therapy approaches.

Artificial muscles and tendons for knee, ankle, and tendon reinforcement will also become increasingly popular due to a growing propensity for minimally invasive procedures, government activities to raise awareness about sports injuries, and developments in surgical methods. Surgical tendon restoration was frequently viewed as the last choice by both patients and doctors.

Nonsurgical options include NSAIDs (Nonsteroidal Anti-Inflammatory Drugs) and Corticosteroids. Stretching and strengthening are used in physical therapy to treat tendinopathy. Plantar fasciitis and Achilles tendon discomfort are treated with extracorporeal shockwave therapy as an alternative. Market participants' increased focus on releasing new goods, the presence of tight regulatory rules, and documentation mandates are projected to hinder market expansion. However, a lack of reimbursement and the expensive costs of these activities are expected to stifle market expansion.

The center for disease control and prevention (CDC) and the American College of Surgeons (ACS) suggested postponing or canceling non-emergency surgical procedures in March 2020 impacting millions of people all around the world. Furthermore, because of the pandemic scenario in different parts of the world, orthopedics and tendon repair surgeries have been delayed. The COVID-19 pandemic, for example, caused a two-month delay in rotator cuff replacement treatments, according to a report published in JSES International. Owing to monetary pressure on hospitals and governments induced by the outbreak of COVID-19, the company was also susceptible to changes in tax policy, pricing, and reimbursement policy, resulting in a negative impact on its operating profit and sales. As a result of these considerations, global market growth has slowed throughout this epidemic.

In addition, the scaffolds segment is expected to the row highest rate at a lucrative CAGR during the forecast period, due to the limitations of existing technologies and the difficulties that come with each of them when used for a prolonged period, the use of alternative therapies for tendon restoration has grown in popularity. Tissue engineering for tendon regeneration has been a hot topic in tendon repair recently.

Based on the application, rotator cuff tears accounted for the largest revenue share of 38.7% in 2021. The segment is divided into rotator cuff repair, Achilles tendinosis repair, cruciate ligament repairs, biceps tenodesis, and others. Rotator cuff tears can occur because of a sudden fall on an outstretched arm, repetitive activities over time, or degenerative tears because of age. This repair frequently necessitates surgical intervention. Exfoliating off stress fractures that may be squeezing the shoulder and/or mending injured tendons or shoulder muscles are examples of this. Arthroscopy, open surgery, or a combination of the two are surgical options for rotator cuff problems. The prevalence of rotator cuff tears has increased with age due to deterioration, according to an article on NCBI. According to studies, full-thickness RCT prevalence is 28 percent in adults under the age of 60, 50 percent in those over the age of seventy, and 80 percent in people over the age of eighty. 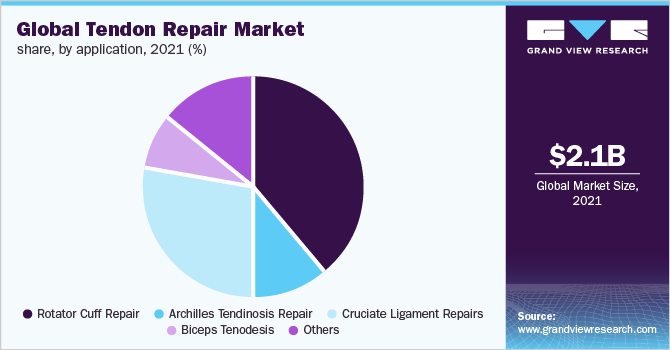 Biceps tenodesis is expected to grow at the highest rate at a lucrative CAGR during the forecast period. It can be performed via arthroscopy or open surgery, and it is effective in 70% of patients. The biceps tendon is pulled through the incision and released from the labrum before being reattached to the humerus bone using thread anchors and screw systems. Suture anchors are comprised of biocompatible synthetic fibers that are biostable. Screws can be manufactured entirely of metal, commonly titanium, or of physiologically stable chemicals in combination with metal. As a result, the repair is completed faster and lasts longer.

North America accounted for the highest revenue share 45.2% in 2021. In the United States, there is a growing geriatric population of fifty-four million people. In recent years, the number of individuals participating in sporting activities has increased, which is a major driver driving the tendon repair market growth in the region. Every year, Canadians spend more than USD 187 million on sports injury treatment.

The Asia Pacific has the world's largest population due to the high population density in the area, there is a higher occurrence of age-related tendon ruptures. Manufacturing capabilities combined with rapid technical improvements are a winning combination. Increased attention to health and well-being, as well as active engagement in sports, are all linked to an increase in the number of persons who suffer from sports injuries. With the help of government programs and a rise in total disposable income, the region's healthcare infrastructure is constantly developing.

Extension, partnerships, collaborations, product launches, and acquisitions are among the parameters used to evaluate major deals and strategic partners between companies in the orthopedic industry and the tendon repair market. These tactics are being implemented by players in the tendon repair market and create their product portfolios, offer a varied range of technologically advanced and novel solutions, and expand their customer base. For instance, Arthrex spent USD 100 million in Anderson County in October 2021 to expand its activities, including a production unit, electronic beam, and X-Ray sterilizing facilities. Some of the prominent players in the global tendon repair market include:

This report forecasts revenue growth at global, regional, and country levels and provides an analysis of the latest industry trends in each of the sub-segments from 2016 to 2030. Grand View Research, Inc. has segmented the global tendon repair market report based on product type, application, and region:

How big is the tendon repair market?

What is the tendon repair market growth?

Which segment accounted for the largest tendon repair market share?

b. North America dominated the tendon repair market with a share of 45.2% in 2021. In the United States, there is a growing geriatric population of 54 million people. In recent years, the number of individuals participating in sporting activities has increased, which is a major driver driving the tendons repair market growth in the region.

Who are the key players in tendon repair market?

What are the factors driving the tendon repair market?

b. Key factors that are driving the tendon repair market growth include multiple tissue injuries are more common in the elderly. A rotator cuff injury affects more than 40% of the total population aged 60 and up, according to an article published in the Advances in Orthopedic Surgery journal. Modernization has brought about changes in lifestyle and lack of physical activity, among other things, making the population more vulnerable to musculoskeletal problems and diseases.