The global tertiary amines market size was estimated at USD 3.87 billion in 2018 and is expected to witness a CAGR of 5.6% from 2019 to 2025. The rising application of surfactants and emulsifiers in personal care, pharmaceuticals, and cleaning among other end-use industries is expected to drive the growth.

Tertiary amines are directly used as intermediates during the production of various chemicals such as fuel oils, cosmetics, citric acid, and surfactants and for manufacturing metal extracting agents, preservatives, and fungicides. The product is majorly used for the synthesis of quaternary ammonium salts, replacement reactions, and elimination of the amino group. 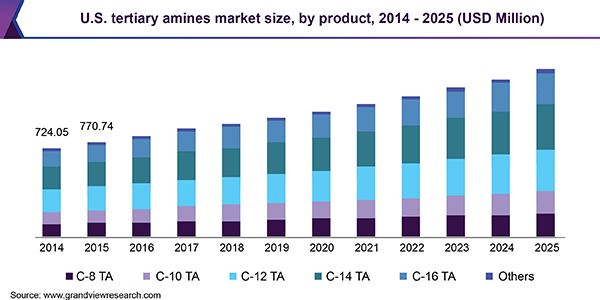 The U.S. market for tertiary amines is expected to witness moderate growth over the forecast period, with major opportunities in water treatment and personal care applications. Rising demand for detergents, cleaning products, and crop protection chemicals is expected to augment the demand. The domestic manufacturers focus on exports to expand their geographical reach.

Increasing demand for creams and moisturizers owing to the growing consumer awareness and disposable income is expected to augment the market growth. Triethanolamine is an ammonia compound used as emulsifiers or foaming agents in cosmetics. It is reacted with lauryl sulfate to form foam-based surfactant used in hair shampoos. Constantly evolving personal care sector, which offers sophisticated products, and high investment in R&D of premium products is expected to positively impact the growth.

Global crude oil prices are constantly fluctuating depending on various factors, which include supply-demand balance, geopolitical and macroeconomic state of affairs, exchange rate, and conditions of financial markets. Tertiary amines are usually manufactured from non-renewable feedstock including crude oil. Demand for crude oil in end-use industries, such as petroleum, petrochemicals, and organic chemicals is high. However, there are not many crude oil reserves available to balance the demand-supply gap due to constraints on exploration activities. This is likely to decrease the supply of crude oil from their respective reserves and cause an increase in its price.

C-14 tertiary amine is expected to emerge as the fastest-growing segment with a CAGR of 6.2%, in terms of revenue, from 2019 to 2025. The robust growth is due to the increasing demand for the product in agrochemical and fuel additive applications. Increasing utilization as raw material for manufacturing emulsifiers, mold release agents, flotation agents, anti-caking agents, fuel additives, and sludge inhibitors is expected to drive the demand.

C-12 tertiary amines are one of the fastest-growing products. The demand is driven by product innovation and their increasing application in upcoming end-use industries such as personal care and agrochemicals. C-12 tertiary amines are majorly used for the manufacturing of bactericides and germicides, oil recovery agents, wood preservatives, hair care ingredients, and corrosion inhibitors.

Surfactant is the major application segment of the tertiary amines market and accounted for around 18.3% of the volume share, in 2018. Growing usage of surfactants as an emulsifier, wetting agent, foaming agent, detergent, or dispersant in cosmetics, agrochemicals, and cleansing is anticipated to drive the growth. Tertiary amines are majorly used for manufacturing nonionic surfactants. The steady growth in demand for surfactants due to rising focus on innovation and change in consumer attitude is expected to play a major role in driving the demand.

The growing number of oil exploration activities in the Pacific and Persian Gulf regions coupled with increasing mining activities across the globe are expected to propel the demand for drilling fluids in the upcoming years. Increasing offshore production is also acting as one of the key driving factors fueling the growth of the drilling fluids market.

The personal care end-use is likely to exhibit a significant CAGR of 6.6%, in terms of revenue, from 2019 to 2025. The rise in the aging population coupled with rising consumer awareness about the new products is expected to fuel the segment growth. The rising awareness regarding cosmetic products, such as hair styling, facial makeup, and coloring products in countries like India, China, and Japan is expected to further fuel the growth.

Moreover, increasing consumer awareness regarding environmental concerns and food safety has led to a rise in demand for biopesticides. In addition, the demand for biopesticides is likely to witness growth over the forecast period with the phasing out of certain pesticides, such as atrazine, chlorpyrifos, and glyphosate, which, in turn, is expected to hamper the growth of the market for tertiary amines. 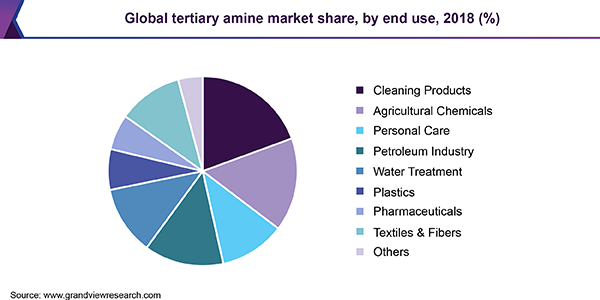 U.S. accounted for the highest revenue share in the consumption of tertiary amines in North America in 2018 and is expected to register a CAGR of 5.7% during the forecast period. The tertiary amines are consumed to a large extent for manufacturing personal care and cosmetics products.

Europe is the third-largest region in terms of consumption of tertiary amines and is anticipated to expand at a CAGR of 4.2% from 2019 to 2025. The growth of polyurethane foam, textile, and personal care industries is expected to drive the regional demand. The implementation of stringent regulations imposed by government bodies and organizations, such as Ofwat, DW, and SEPA for treatment of wastewater and drainage water is expected to boost demand for water treatment chemicals.

The companies operating in the market for tertiary amines engage in joint ventures and mergers and acquisitions. Manufacturers are trying to reach out to maximum potential customers at optimum distribution cost. Recently, Temix Oleo signed a letter of intent with Acme-Hardesty for the distribution, sale, and marketing of specialty oleochemicals, esters, and derivatives in the U.S. This agreement is expected to strengthen the company’s distribution network and logistics infrastructure in the U.S., primarily in lubricant and personal care markets.

The manufacturers engage in developing and innovating new technologies to reduce manufacturing cost and time, while simultaneously increasing operational efficiency. To obtain operational excellence, KAO Corporation uses its proprietary catalyst technology to manufacture tertiary amines. The process involves the addition of dimethylamine to fatty alcohol in the presence of a catalyst, which minimizes reaction time between dimethylamine and fatty alcohol, in turn, quickly delivering tertiary amines. The product can be used as a basic ingredient in dishwashing detergent, hair conditioner, disinfectant, and many other household products.

This report forecasts revenue growth at global, regional, and country level and provides an analysis of the latest industry trends in each of the sub-segments from 2014 to 2025. For the purpose of this study, Grand View Research has segmented the global tertiary amines market report on the basis of product, application, end-use, and region: