The global ROADM WSS component market size was valued at USD 529.8 million in 2017. It is slated to rise at a CAGR of 12.1% from 2018 to 2025. The market has witnessed considerable growth over the past few years owing to growing network bandwidth requirements across the globe. Moreover, some unique advantages offered by ROADM WSS components such as complete monitoring of network operations, remote process management, reduced network operation cost, and control of high capacity network infrastructure have been stoking the growth of the market.

ROADM systems facilitate the addition of new services without requiring an upgrade or substantial change to the network. They allow remote, precise, and flexible selection of wavelengths. This capability is likely to act as a primary growth stimulant for the market during the forecast period. In addition, the development of cost-effective next-generation WSS modules for CDC applications will augur well for the overall market. 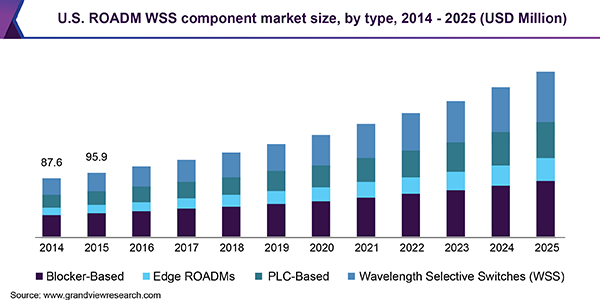 Surging demand for dynamic ROADMs as well as wavelength selective switches (WSS) enabled ROADMs owing to lower cost is anticipated to augment the market. In addition, technological advancements in these components will further propel the market over the forecast period.

The introduction of automated edge optical add-drop multiplexer (OADM) that allows customers to deploy ROADM WSS in metro networks at low cost is projected to bolster the growth of the market. In addition, WSS-enabled ROADM successfully sets up a remote wavelength path, thereby avoiding the need to assign a specialist to intermediate node. This facilitates a reduction in operational costs, which in turn, is poised to drive the market.

However, complexity in the deployment of these components and high costs associated with deployment can hamper growth prospects. Also, deployment of new ROADM network services on existing networks requires manpower for overhauling, which results in extra expenses. This can further impede the growth of the market.

On the basis of type, the market has been segmented into blocker-based, edge ROADMs, planar lightwave circuit (PLC) based, and wavelength selective switching (WSS). The WSS segment is expected to witness the highest CAGR during the forecast period. Increasing network data traffic and spiraling demand for high-speed networks are benefiting the growth of the segment.

PLC-based ROADM WSS components provide various features such as ease of usage, ease of programming, process control capabilities, and sequential control. Furthermore, they are available at low cost and also consume lower power. These factors are estimated to escalate the growth of the segment over the forecast period.

On the basis of node, the ROADM WSS component market has been bifurcated into two-node and multi-node. Data traffic generated by the growing use of various new network services across the globe is increasing, which in turn, is poised to fuel the demand for multi-node ROADM architecture to control and maintain the efficiency of the network.

Introduction of advanced multi-node ROADM with new features, including colorless and directionless. The directionless feature enables any transponder to connect with any degree node and colorless feature allows adding/drop ports at any wavelength. These features reduce problems related to wavelength connection, improve switching flexibility, and minimize hardware and operation costs. This is likely to drive demand for the multi-node segment to withstand the increasing network traffic problem.

The long haul segment is anticipated to post a higher CAGR over the forecast period. Surging adoption of ROADM WSS components in the long haul to tackle increasing network traffic driven by a rise in demand for packet-based services across the globe has been contributing to the growth of the segment. In addition, the development of advanced optical layer based ROADM architecture with WSS that supports a large number of ROADM ports and provides scalability for colorless, directionless, and contentionless (CDC) and colorless and directionless (CD) add/drop is supporting the growth of the overall market.

With the ability to utilize WSS to control per channel power levels, advanced architecture helps in improving performance in long haul applications. In addition, advanced ROADM architecture supports a high baud rate that helps in reducing cost per bit and also increases spectral efficiency. It is further projected to spur the growth of the segment. 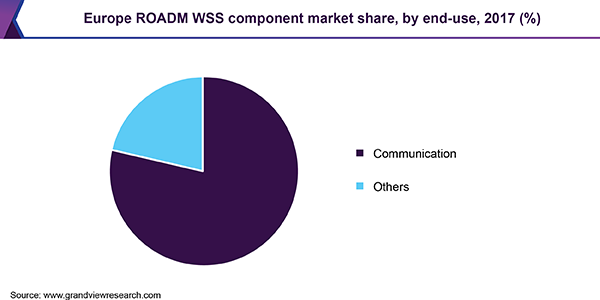 Greater allocation of funds by governments for up-gradation of network infrastructure and growing awareness of the benefits of adopting fiber optic networks are expected to boost the growth of the segment. Increasing investments in research and development are undertaken by prominent market players focused on developing and upgrading advanced fiber optics technologies are estimated to supplement the growth of the communication segment over the forecast period.

North America dominated the market with a size of USD 159.7 million in 2017. This growth can be attributed to technological advancements owing to the high adoption of ROADM architecture in the communication sector. In addition, extensive worldwide penetration of internet connectivity and a surge in network data traffic has been stirring up the demand for high-speed communication networks.

The Asia Pacific regional market is projected to register considerable growth over the forecast period. Rising internet data traffic volume owing to the popularization of social networks and cloud services is poised to accelerate the demand for cost-effective ROADM WSS components for flexible and sustainable network access.

Fujitsu’s Flashwave series of ROADMs are designed for advanced dense wavelength division multiplexing (DWDM) ROADM and network capabilities to manage the delivery of growing networks in metro and regional areas. These systems support a combination of the European Telecommunications Standards Institute (ETSI) and the American National Standards Institute (ANSI) certified solutions with flexible configuration to optimize regional and metro networks.

This report forecasts revenue growth at the global, regional, and country levels and provides an analysis of the industry trends in each of the sub-segments from 2014 to 2025. For the purpose of this study, Grand View Research has segmented the global ROADM WSS component market report on the basis of type, node, application, end-use, and region: