The global tilt sensor market size was valued at USD 161.1 million in 2018 and is expected to grow at a compound annual growth rate (CAGR) of 8.9% from 2019 to 2025.  The market has witnessed steady growth over the years owing to rising demand for these devices from smartphones, automobiles, ships, laptops, gaming consoles, and land-based satellite communication device manufacturers. Furthermore, increased demand is expected from construction, agriculture, mining, transportation, and industrial automation sectors. These are a few major reasons expected to boost the growth prospects of the market over the forecast period. 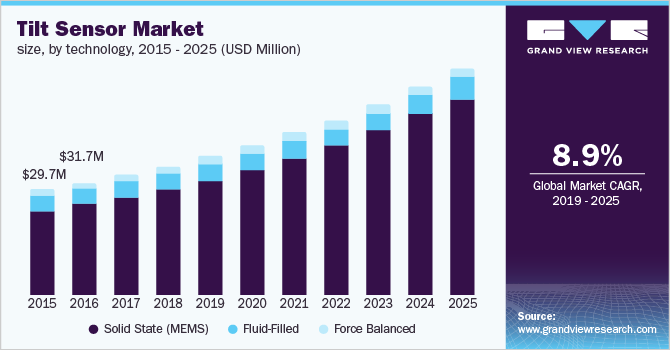 The usage of and demand for tilt sensors has notably increased over the past few years. Tilt sensors have developed gradually from ordinary mechanical pendulum-like devices to fluid-filled electrolytic-type devices to MEMS-based digital sensors. For a long time, tilt sensors were used only to measure safety parameters such as boom angles and vehicle reaction in the automotive sector. As the technology evolved and safety regulations ensured workers’ protection, these devices can be easily integrated with other devices for various applications. Due to ongoing research activities, these devices are now being used to drive innovation in areas such as drivers’ comfort in automobiles.

A tilt sensor produces an electric signal with an angular movement and is used to measure slope with a finite range of motion. Construction equipment manufacturers are also realizing the importance of deploying tilt sensors to avoid serious mishaps at construction sites. These devices are specially used in scissor lifts, telehandlers, boom lifts, and aerial work platforms (AWP) for appropriate monitoring of tilt angles at construction sites and avoiding mishaps such as collisions, falling, entrapment, and crane overturning. These devices aid in monitoring the chassis tilt angle, platform tilt angle, and the platform height of a variety of heavy machinery used at construction sites.

The safety of workers continues to be paramount in the agriculture sector. Safe operation of agricultural vehicles such as tractors, cranes, man-lifts, off-road vehicles, and lift platforms is essential to avoid any mishaps to the operator or people around. Moreover, the emphasis of these industries on the use of autonomous control functions has notably increased over the years. These factors and the increased need for efficiency of these vehicles, safety, and operator comfort have made sensors with special emphasis on tip-over protection and platform leveling and tilt alarms indispensable in these industries.

In the U.S. and several European countries, stringent safety regulations are in place to promote workers’ safety. Similarly, in the Asian Pacific region, with a large number of infrastructure projects in the pipeline, focus on safety regulations is increasing. All manufacturers of heavy vehicles such as cranes, lift platforms, and other kinds of construction and agricultural equipment are required to incorporate sensors in their products to ensure maximum safety and smooth operation. Additionally, industrial equipment manufacturers need to adhere to government regulations concerning Electro Magnetic Compatibility (EMC) of the equipment.

Moreover, as the technology has evolved and tilt sensors have moved from being analog to digital, the number of ways tilt sensors can be integrated into a range of applications has also increased. Digital sensors are more resistant to interference from analog signals and the shift from analog to digital sensors is taking place at a rapid pace in countries such as the U.S., Japan, Singapore, Sweden, Norway, Switzerland, and Finland. Digital sensors are also more precise when it comes to data conversion adaptable to CAN or BUS outputs.

Based on the housing material type, the market has been classified into non-metal and metal. The non-metal segment accounted for a dominant share of over 65% in 2018 and is likely to retain its dominance over the forecast period. This can be attributed to the huge demand for tilt sensors that incorporate a high-grade plastic housing material. The segment is also likely to emerge as the fastest-growing segment over the forecast period.

Due to the unique properties of tilt sensors housed in high-grade plastic such as compact size and easy installation, they provide a high degree of ingress protection. Tilt sensors made from materials such as aluminum and stainless steel also find use in a variety of applications. However, the demand for these tilt sensors is likely to remain much lower as compared to non-metal tilt sensors over the forecast period.

Based on technology, the tilt sensor market is classified into a solid-state (MEMS), fluid-filled, and force balanced. Solid-state electromechanical MEMS sensors are easy to install and have integral signal conditioning; however, their thermal coefficients are extremely high and it is difficult to obtain accuracy using them in most applications. Because for their compact size, they fit easily into the required machine or component to measure tilt angles. Owing to this, there is a high demand for solid-state tilt sensors and the segment is expected to dominate over the forecast period.

The market for tilt sensors is segmented based on application into construction & mining, automotive & transportation, aerospace & defense, telecommunications, and others. Of these, the aerospace & defense segment is expected to register the highest CAGR over the forecast period, followed by the telecommunications segment. In the construction sector, tilt sensors are used to measure the chassis angle to prevent heavy machines from losing their balance and tipping over. Furthermore, for elevated platforms, these sensors are used to measure the chassis tilt angle to avoid boom movement or platform height increase.

In the mining sector, tilt sensors are used for measuring inertial, tilt, vibration, and seismic activities. In the automotive sector, these sensors are used to develop air-bag systems, electronic stability controls, and tilt angle measurement solutions. In the transportation sector, these devices are typically used in hydraulic leveling systems in RV safety and functionality, giving stability to parked vehicles on uneven grounds. In aircraft, these sensors are used to measure the tilt in multiple axes of a reference plane. 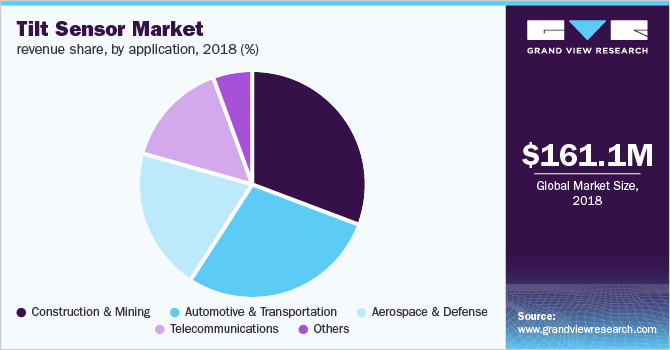 In the telecommunications sector, these sensors are used to monitor the tilt angle of the communication tower in real-time and safety measures are taken accordingly to avoid unwanted accidents. Similarly, the other segment in the report includes applications such as robots, smartphone joysticks, laptops, video cameras, thermostats, and tablets. In smartphones, tilt sensors are used to aid in the auto-rotate function of the phone.

In the aerospace sector, for instance, these devices are used to help pilots execute stunts at high speed with amazing precision. Pilots use super-fast machinery for their aerobatics stunts and tilt sensors are used as transducers in the critical parts of the plane’s computer-assisted circuitry. Typically, these devices aid pilots in understanding the horizontal and vertical inclination of airplanes so that the pilots can deal with obstacles during maneuvering. These devices emit an electric signal proportional to the inclination degree concerning one or more axes, thereby helping the pilot in the decision-making process.

Among the key regional markets covered in the report, Asia Pacific currently dominates the market. The regional market is also expected to register the highest CAGR over the forecast period due to the steady expansion of industries and sectors such as aerospace, defense, automotive, construction, mining, and transportation. The Middle East and African regional market are also expected to display a considerable amount of growth prospects over the forecast period. This can be attributed to the steady growth opportunities expected in industries and sectors such as agriculture, automotive, construction, mining, and transportation, which is expected to increase the demand for tilt sensors.

The market is highly fragmented owing to the presence of several players trying to compete with one another. To survive the rising competition, key industry players are emphasizing on investing in research & development activities, entering into partnerships with established players, and focusing on enhancing their distribution strategies by collaborating with global distributors. The distribution of tilt sensors through a robust network of third-party partners in various countries also helps key companies strengthen their positions in the global market.

For instance, Variohm Group acquired Positek in May 2019. This acquisition is likely to help the Variohm Group expand its overall customer support and production capability and distribution channels in several industrial markets. Some of the prominent players in the tilt sensor market include:

This report forecasts revenue growth at global, regional, and country levels and provides an analysis of the latest industry trends in each of the sub-segments from 2015 to 2025. For this study, Grand View Research has segmented the global tilt sensor market report based on housing material type, technology, application, and region:

How big is the tilt sensor market?

What is the tilt sensor market growth?

Which segment accounted for the largest tilt sensor market share?

b. The Asia Pacific dominated the tilt sensor market with a share of 50.9% in 2019. This is attributable to the steady expansion of industries and sectors such as aerospace, defense, automotive, construction, mining, and transportation.

Who are the key players in tilt sensor market?

What are the factors driving the tilt sensor market?

b. Key factors that are driving the market growth include growing demand for construction equipment, movable work platforms, aerial lifts and tipping trucks across the globe, and increasing demand for MEMS tilt sensors.