The global toxicity testing outsourcing market was valued at USD 3.0 billion in 2021 and is expected to expand at a compound annual growth rate (CAGR) of 9.4% from 2022 to 2030. The market is likely to develop primarily due to increased pharmaceutical research and opposition to animal testing. There has also been a rise in demand for toxicity testing services due to increasing R&D spending by biopharmaceutical and pharmaceutical firms, and there has also been a rise in the number of innovative drugs, entering the preclinical stage of development. Additionally, the COVID-19 pandemic has caused the market for outsourcing toxicity services to grow. This is due to the large number of research studies being performed on drugs, vaccines, and medical devices intended for the treatment and prevention of coronavirus. This is anticipated to increase the use of toxicity testing services. There has been a significant increase in the demand for biologics as they provide treatment for complex conditions. 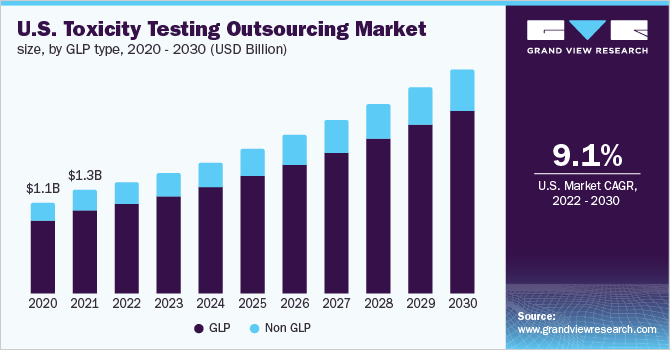 According to a report provided by IQVIA, a top global provider of contract research services, technology solutions, and advanced analytics to the life sciences sector, 34.0% of spending in Europe represents biologics and is expected to reach USD 87.44 billion in 2021. This expenditure on medicine will be owed to an increase in toxicity testing facilities.

In its 19th Annual Report and Survey, Bio Plan Associates, a provider of information services to the biotechnology, pharmaceutical, and healthcare industries, notes that the biopharmaceutical industry is investing heavily, working harder to acquire better technologies, and displaying increased optimism. According to the survey, toxicity testing was the second-most commonly outsourced activity among the 26 areas surveyed. Around 79.4% of survey respondents said they would be interested in outsourcing toxicological testing.

Research and development is also becoming complex. Pharmaceutical and biopharmaceutical firms are operating in environments that are becoming increasingly difficult to navigate. Improvements in many therapeutic areas, as well as the emergence of new types of therapies such as genetically targeted therapies, biologics, stem cell therapies, and other treatment modalities, have resulted in more complex development and regulatory pathways. To develop a treatment that is secure and efficient, it is necessary to do toxicity testing at each stage, which is boosting the market's growth.

The method segment is subdivided into in-vivo and in-vitro. The in-vitro segment accounted for the largest share of 57.7% in 2021. Growing toxicological awareness and a larger preclinical pipeline are the two major market-driving factors. Furthermore, the rising prices associated with traditional animal tests, as well as the socio-ethical issues associated with animal tests, are expected to propel the growth of the market for in-vitro toxicology testing.

Significant advancements in the in-vitro toxicology assays used to assess the safety of pharmaceuticals and the potential effects of those drugs on cells and tissues are anticipated to support market expansion. As the market for in-vitro toxicological analysis grows, companies are expanding their product lines, to meet the increased demand for such assays.

The GLP segment dominated the market with a share of 80.6% in 2021 and is anticipated to grow at the fastest CAGR during the forecast period. Clinical studies such as safety pharmacology, geno-toxicity, and repeated dose toxicity are mandatory for safe exposure to humans and must be performed as per the GLP standards. These studies are required to be conducted before the IND application. After IND approval, other GLP experiments to evaluate chronic toxicity, developmental & reproductive toxicity, geno-toxicity, and carcinogenicity must be carried out during the clinical phase of development.

The non-GLP is expected to register a significant CAGR during the forecast period. The nonclinical studies are conducted using different preliminary studies that aim to investigate the candidate’s safety, including general toxicology, safety pharmacology, mutagenicity, and geno-toxicity. These preliminary studies are aimed at investigating the safety of drug candidates to obtain preliminary information on their tolerability in various systems and do not necessarily comply with GLP regulations.

Furthermore, the R&D budget allocated to early-stage development has also increased considerably, which is expected to boost this segment during the forecast period. A growing number of biologics in the preclinical pipeline coupled with the increasing trend of outsourcing in biopharmaceutical companies is expected to drive the growth of this segment throughout the forecast period. 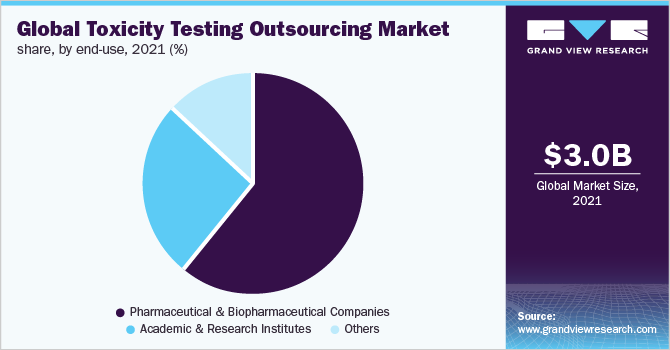 The academic and research institutes accounted for the fastest CAGR of 9.6% during the forecast period. They are increasingly outsourcing toxicity services to CROs. Academic research institutes are a significant source of revenue for large CROs like Charles River Laboratories and Lab Corp.   Increasing rate of the academic-sponsored R&D is expected to propel the growth of the toxicity services outsourcing market, during the forecast period.

North America dominated the market with a revenue share of 43.6% in 2021. This is due to an increased focus on drug discovery by governmental organizations, an increase in healthcare spending, and the availability of sufficient infrastructure to support the growth and development of drug discovery technologies. Furthermore, the use of services for toxicity testing in the local market has been pushed by strict regulatory restrictions meant for the development and clearance of drugs. 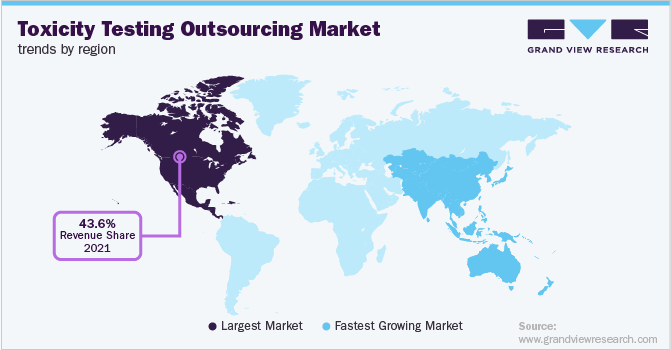 Asia-Pacific region is expected to grow at a lucrative rate with a CAGR of 11.3% during the forecast period owing to the changing business model of MNC outsourcing and rising costs of R&D, which is expected to increase toxicity testing outsourcing in the Asia Pacific, owing to the cost efficiency offered by CROs and CDMOs in countries such as India and China.

The players are continuously involved in expanding their facilities, collaborating, and engaging in partnerships, mergers, and acquisitions of the companies. These are key strategic initiatives that are influencing the industry dynamics. For instance, in December 2021, Labcorp acquired Toxikon Corporation which is a contract research organization. This acquisition will help Labcorp for the development and expansion of CRO services in pharmaceutical and medical device testing. Some of the prominent players in the global toxicity testing outsourcing market include:

This report forecasts revenue growth at global, regional, and country level and provides an analysis on the latest trends and opportunities in each of the sub-segments from 2018 to 2030. For this study, Grand View Research has segmented the global toxicity testing outsourcing market based on the method, GLP type, end-use, and region: 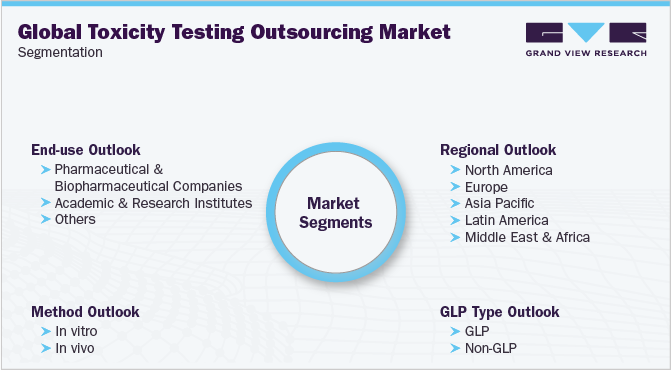 How big is the toxicity testing outsourcing market?

What is the toxicity testing outsourcing market growth?

b. North America dominated the toxicity testing outsourcing with a share of 43.6% in 2021. This is attributable to the availability of funding and grants from government organizations such as the National Institute of Health (NIH) to foster research activities.

Who are the key players in the toxicity testing outsourcing market?

What are the factors driving the toxicity testing outsourcing market?