The global traction transformer market size was valued at USD 594.0 million in 2018. It is anticipated to register a CAGR of 4.9% from 2019 to 2025. The promising pace of development of rail infrastructure in several countries across the globe and an increase in the demand for faster commuting networks have helped the market gain momentum over the years.

To ensure a steady rise in demand, several OEMs in the market are entering into public-private partnerships to develop rail infrastructure in different countries worldwide. Furthermore, favorable government initiatives, including funding for the development of better public transportation, are estimated to facilitate the implementation of this equipment, which in turn will help strengthen operational capabilities of railway infrastructure across several countries over the forecast period. 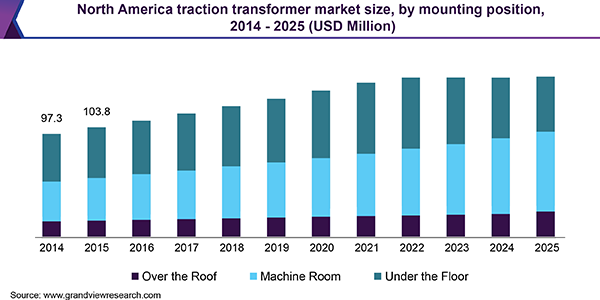 Moreover, increased adoption of rail traction systems in both traditional and next-generation locomotives such as diesel and electric locomotives, high-speed trains, and tram-trains to support the rising number of passengers and travel routes is expected to drive the market over the forecast years.

The equipment is manufactured with non-flammable, high-temperature, and vibration-resistant materials to deal with varied working as well as climatic conditions across different regions. Such complicated design standards and varying requirements for various railway power supply systems can restrain the growth of the market.

Based on the voltage network, traction transformers are primarily categorized into two types, namely AC and DC. In 2018, AC systems represented approximately 69.0% of the overall revenue. They are also likely to post a higher CAGR during the forecast period.

Growing awareness regarding the need to switch to energy-efficient products as a way of reducing economic and ecological damage caused by outdated technologies is leading to increased demand for AC type equipment worldwide. Furthermore, the burgeoning popularity of AC systems in mainline railways has been contributing to the growth of the segment.

Based on the mounting position, the global traction transformer market has been categorized into over the roof, machine room, and under the floor. Under the floor and machine room categories represented a cumulative share of over 84.0% in terms of revenue in 2018.

The latter is poised to exhibit a CAGR of 5.8% during the forecast period. The installation of traction transformers under the floor provides additional space and capacity in trains. Thus, the demand for equipment that can be placed under the floor is expected to experience an upswing 1in economies wherein an increasing population is placing extra pressure on existing transport infrastructure.

Equipment installed in machine rooms offers maximum reliability and flexibility in multi-phase rail systems. Soaring use of machine room traction systems in electric locomotives and high-speed trains is projected to supplement the growth of the segment over the forecast period. 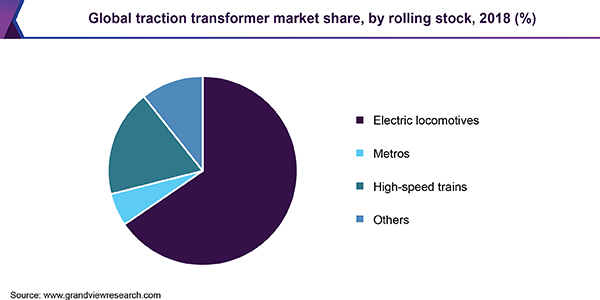 The railway sector is increasingly shifting towards novel technologies and cleaner and faster machines. This trend is anticipated to result in an improved scope of demand for traction transformers in the electric locomotives segment over the forecast period. These transformers also find high adoption in high-speed trains.

In 2018, Europe and the Asia Pacific, collectively, held more than 60.0% of the overall revenue. The market in Europe is mature, with early implementation of most of the recent technological advancements observed in rail traction systems. The demand in APAC is estimated to rise at a noteworthy CAGR in terms of value over the forecast years. This growth can be attributed to increasing government investments and favorable regulations aimed at establishing advanced railway infrastructure in the region.

The rail infrastructure in emerging and developed economies across the two regions has witnessed the advent of high-speed and metro railways over the years, thanks to the steady electrification of national railroads. Major electric traction programs have been undertaken in developed countries across these regions in the past years.

Countries including Japan, Switzerland, Belgium, and the Netherlands are at the forefront of electrified urban rapid-transit rail systems implementation. As such, these regions present promising growth opportunities for advanced traction transformer manufacturers shortly.

The market is characterized by intense competition and is dominated by a few well-established players. The majority of contracts related to the development of rail infrastructure are awarded to OEMs with strong foothold worldwide. Some of the leading players in the market are ABB, Alstom, Siemens, and EMCO Limited.

Key manufacturers such as ABB and Siemens are focused on developing innovative equipment that can help reduce noise, carbon emission, power losses, and total energy cost of trains while also increasing their efficiency and performance. Increased investments in R&D activities aimed at the development of energy-efficient products with maximum operational efficiency are also a key business strategy adopted by leading players in the market. Companies are also focusing on meeting customer requirements and improving the performance of their products.

This report forecasts revenue growth at the global, regional, and country levels and provides an analysis of the latest industry trends from each of the sub-segments 2014 to 2025. For this study, Grand View Research has segmented the global traction transformer market report based on voltage network, mounting position, rolling stock, and region: