The global transcranial magnetic stimulator market size was valued at USD 883.38 million in 2018 and is anticipated to grow at a CAGR of 8.8% over the forecast period. Increasing prevalence of neurological disorders, such as Alzheimer’s and Parkinson’s disease (PD), along with increasing awareness about TMS among professionals are few factors driving the growth. 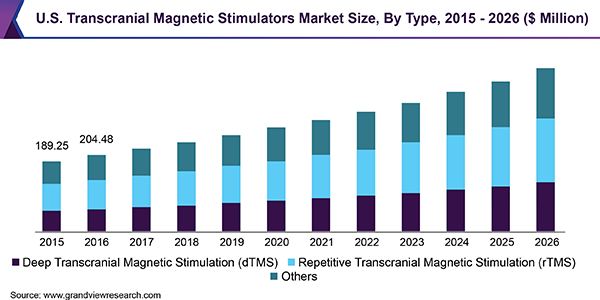 Transcranial Magnetic Stimulation (TMS) is a non-invasive technique that uses a magnetic field to reduce chronic pain and stimulate nerve cells in the brain. It also improves symptoms of neurological disorders, such as depression. TMS is mainly used for Treatment-resistant Depression (TRD). Many healthcare professionals have reported positive outcomes of this treatment. This treatment is not recommended for patients with metal implants in eyes or ears, facial tattoos with magnetic ink, or cardiac pacemakers.

Calabasas TMS Center was one of the first TMS therapy centers in the U.S. that provide treatment to patients suffering from depression. Healthcare authorities, such as the U.S. FDA, have approved TMS for various disorders—Post-Traumatic Stress Disorder (PTSD), PD, schizophrenia, stroke, nicotine addiction, and chronic pain.

According to a report by the ScienceDirect, in 2018, 5.8 million individuals in the U.S. were suffering from Alzheimer's Disease (AD). Furthermore, in the U.S., every 65 seconds, someone is diagnosed with AD. According to WHO, around 10 million people are affected by dementia in Europe. The number of people suffering from dementia is expected to increase from 50 million in 2018 to 152 million in 2050. Thus, increasing prevalence of AD along with dementia is expected to aid market growth.

According to NCBI, dopamine deficiency is associated with depression, memory loss, loss of balance, and stiffness in muscles. As per Parkinson’s Foundation, around 1 million people are expected to be diagnosed with PD in the U.S. by 2020. Men are more likely to be diagnosed with PD as compared to females. Furthermore, according to the Anxiety and Depression Association of America, anxiety disorder affects around 40 million adults in America. Therefore, the growing prevalence of anxiety disorders and PD has led to an increase in demand for TMS globally.

Deep TMS (dTMS) segment is expected to dominate the market in the forecast period, owing to the growing incidence of Major Depressive Disorder (MDD) & other mental disorders and increasing awareness. Deep TMS is a procedure that uses magnetic fields generated by a coil placed on the scalp. It also allows non-invasive treatment of deep brain areas for those suffering from neurological disorders, such as depression.

Repetitive TMS (rTMS) is expected to be the fastest-growing segment as it has been proposed as the novel treatment for depression and anxiety, which enables direct stimulation of deeper and larger brain volumes (7-10). It is a non-invasive form of brain stimulation and does not require surgery or implantation of electrodes. Upon investigation, it has been found that rTMS can be used to treat several psychiatric disorders, such as unipolar depression, schizophrenia, and bipolar disorder. Therefore, the recommendation from doctors along with the research pertaining to rTMS is expected to positively impact market growth.

On the basis of application, depression held the maximum share of the market in 2018. According to WHO, in 2018, more than half of the population diagnosed with depression are receiving treatment, such as medication and therapies. In addition, as per the Mental Health America (MHA), around half of the U.S. population has a mental health condition, such as MDD and other disorders. Therefore, a high incidence of depression worldwide can be attributed to the major share of the segment. 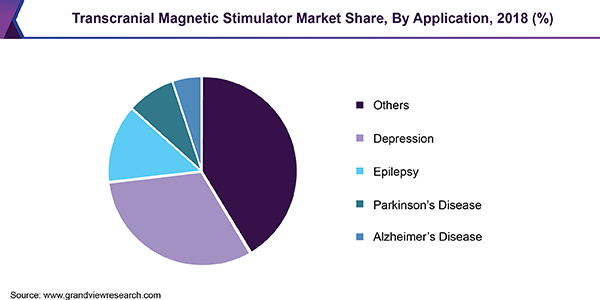 Epilepsy is one of the chronic and non-communicable diseases of the brain, which affects people of all ages. According to WHO, more than 50 million people are living with epilepsy worldwide. In addition, around 2.4 million people are diagnosed with epilepsy every year. Furthermore, the annual incidence of new cases of epilepsy in high-income countries is between 30 and 50 per 1, 00,000 people. According to WHO, in 2019, the risk of premature death in people with epilepsy is up to three times higher than in the general population. Thus, the growing prevalence of epilepsy is expected to impel market demand.

North America is expected to dominate the transcranial magnetic stimulator market due to favorable reimbursement policies, high awareness, availability of highly skilled physicians, and the presence of well-established healthcare facilities in the region. In addition, the growing adoption of technologically advanced products and increasing funding by the government for research & development for innovations in devices & surgical procedures are aiding further growth.

Asia Pacific is expected to witness the highest growth rate over the forecast period due to rising incidence of physiological & neurological disorders, increasing government initiatives, and the growing number of awareness programs being led by NGOs. Growing medical tourism in the emerging economies of the region, rising incidence of MDD, and increasing healthcare expenditure also drive the regional market.

Some of the major players are Brainsway Ltd.; Nexstim Plc; Magstim; Neuronetics, Inc.; TMS Neurosolutions; Mag Venture; and eNeura Inc. These players are focused on launching new technologies and growth strategies, such as mergers & acquisitions. For instance, in September 2017, eNeura Inc. received FDA approval for eNeura spring TMS, which is designed for prophylactic and acute treatment of migraine.

This report forecasts revenue growth at global, regional, and country levels and provides an analysis on the latest industry trends in each of the sub-segments from 2015 to 2026. For the purpose of this study, Grand View Research has segmented the global transcranial magnetic stimulator market report on the basis of type, application, and region:

How big is the transcranial magnetic stimulator market?

b. The global transcranial magnetic stimulator market size was estimated at USD 959.0 million in 2019 and is expected to reach USD 1.0 billion in 2020.

What is the transcranial magnetic stimulator market growth?

b. Repetitive Transcranial Magnetic Stimulation (rTMS) dominated the transcranial magnetic stimulator market with a share of 38.33% in 2019. This is attributable to increasing preference by the surgeons and increased application of rTMS.

Who are the key players in transcranial magnetic stimulator market?

What are the factors driving the transcranial magnetic stimulator market?