The global trona market size was valued at USD 2.8 billion in 2019 and is expected to expand at a compound annual growth rate (CAGR) of 2.4% from 2020 to 2027. Lower emission of greenhouse gases using a trona mineral for the production of soda ash is projected to promote market growth over the coming years. The trona process requires less energy in the production of soda ash compared to the Solvay process and Hou process. Therefore, it produces fewer greenhouse gases and has a less environmental impact. However, there are limited resources of trona mineral, which makes it difficult for large volume production in various countries. 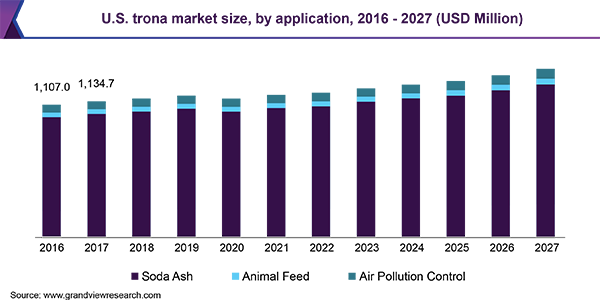 Increasingly stringent pollution control requirements for new power plants have nearly doubled the electricity production cost in the recent past. The U.S. coal-fired power plants and industrial boilers that have long existed need to reduce HCl, Hg, SO3, and SO2 emissions in order to comply with the Air Pollution Control Act, 1995. Flue Gas Desulfurization (FGD) systems have been installed and are increasingly being used in multiple utility and industrial boilers and as well as on some industrial processes. Thus, increasing the use of FGD systems is projected to provide a boost to trona demand.

U.S. trona miners are operating at full capacity owing to significant demand for natural soda ash in various countries. Extracting natural trona is a cost-effective and less tedious technique than the chemical routes used to manufacture synthetic trona. In addition, U.S. natural soda ash leaves behind a significantly lower carbon footprint as compared to the synthetic one, thus being more environment-friendly.

Competition in the U.S. market is based on a number of factors such as consistent customer service, favorable logistics, and the most important, price. Imports have not been an important source of competition in North America as the structural cost advantages of natural soda ash production in the U.S. require lower energy and raw material.

Soda ash was the largest application segment with a volume share of over 92.0% in 2019. Demand from flat and container glassmaking for automotive, building & construction, and pharmaceutical industries is anticipated to drive the market growth over the coming years. Demand from the architectural industry in shower doors, glass tables, furniture, shelves, and cabinets is also projected to provide numerous opportunities for the vendors operating in the trona market.

Increasing manufacturing costs in glassmaking is projected to hinder the market growth over the coming years. Factors including raw materials, energy, wages, overheads, transport, and depreciation make up the total cost structure of a float glass manufacturing process. The raw materials cost and energy consumption constitute the major share of the cost structure.

Glass was the largest end-use industry of trona products. It accounted for a volume share of over 54.0% in 2019. Globally, more than 50.0% of glass is made using soda ash, which is used as a fluxing agent. Improvement in technologies to produce cheap and large volumes of glass products is anticipated to drive the market over the long term. 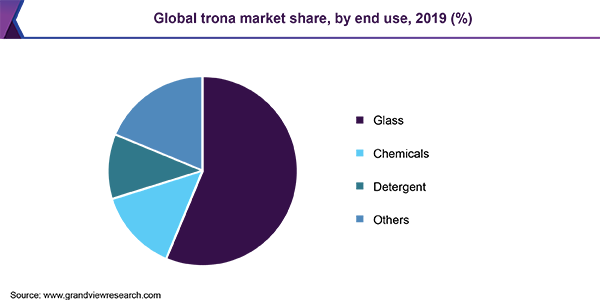 Steel and metal industries are projected to provide opportunities for market vendors over the coming years. Soda ash is used to remove sulfur from iron ore during steelmaking. It ensures smooth operations of blast furnaces and also lowers the manufacturing and operational costs. Light soda is also utilized in aluminum industries.

North America dominated the market and accounted for the largest volume share of over 44.0% in 2019. The region is projected to remain the largest market for trona over the coming years. The use of trona for the production of soda ash and environmental applications is projected to boost the demand for products. Cement manufacturing is also likely to provide a boost to the industry due to significant demand. Soda ash is used to improve grout’s strength and reduce bleeding value in cement.

In Asia Pacific, the market is projected to witness a CAGR of 2.8% from 2020 to 2027. China was the largest construction market in the Asia Pacific between 2016 and 2019. The industry is expected to keep growing due to affordable housing and social infrastructure. China is the leading consumer of flat glass and its innovative infrastructural developments have taken the usage of glass to the next level.

The market is characterized by the presence of a small number of manufacturers mainly situated in the U.S. owing to reserves of trona mineral. An increase in mining in Turkey by small and large companies is projected to change the market dynamics over the coming years. It is estimated that Turkey may have the fourth-largest reserves of the trona in the world following the U.S. and Botswana. Some of the prominent players in the trona market include:

This report forecasts revenue growth at global, regional, and country levels and provides an analysis of the latest industry trends in each of the sub-segments from 2016 to 2027. For the purpose of this study, Grand View Research has segmented the global trona market report based on application, end-use, and region:

How big is the trona market?

What is the trona market growth?

Which segment accounted for the largest trona market share?

b. Soda ash dominated the trona market with a volume share of 92.6% in 2019, owing to large volume production of soda ash in glass making.

Who are the key players in the trona market?

What are the factors driving the trona market?

b. The key factors that are driving the trona market include less energy requirement in soda ash making operations using trona mineral and constant demand for container and flat glass in automotive, building & construction, and pharmaceutical.