The global tumor ablation market size was valued at USD 646.4 million in 2020 and is expected to expand at a compound annual growth rate (CAGR) of 13.2% from 2021 to 2028. The rising prevalence of cancer and the high demand for safer therapeutic options are major factors contributing to the growth of the market. According to the WHO, it is projected that around 10-11 million cancer cases will be diagnosed each year globally by 2030. The number of new cancer cases is expected to increase by more than 80% in low-income countries compared to half the rate in high-income countries (40%) between 2008 to 2030. Lucrative growth potential in currently available therapeutic options and high demand for minimally- and non-invasive therapies are the factors expected to drive the market in upcoming years. 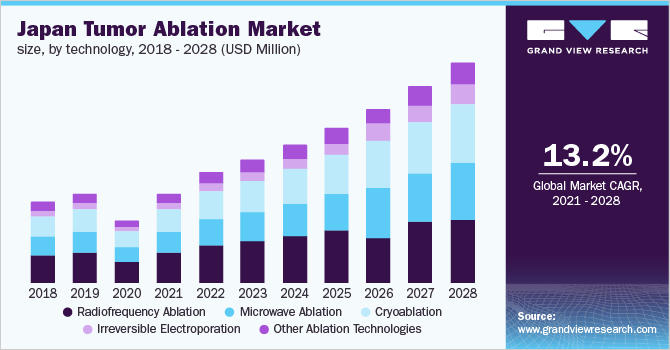 The increasing inclination of surgeons and patients towards minimally invasive procedures owing to benefits such as speedy recovery, patient comfort, and reduced turnaround time are the factors expected to drive the demand for advanced tumor ablation techniques over the forecast period. Advanced tumor ablation procedures are generally performed on an outpatient basis and do not require any hospital admission compared with conventional therapies, thereby significantly reducing the total healthcare cost. The ablative surgeries are the preferred therapy for tumors of smaller sizes. Thus, its procedural volume is indirectly dependent on the yearly cancer screening rates. Since the number of newly diagnosed cancer cases has dropped significantly during COVID owing to fewer screening initiatives undertaken by concerned authorities, the market was significantly impacted in 2020.

According to a report by the Our World in Data (OWD), a project by Global Change Data Lab, over 70.0% of cancer cases occur in people aged 50 years and older in 2017. The number is expected to increase proportionally with the rising geriatric population. The aging population comprises the main target population for noninvasive ablation techniques as the body’s biological functions get compromised with aging. Therefore, the rapidly increasing aging population is expected to boost the demand for tumor ablation techniques during the forecast period.

Technological advancements to enhance accuracy, portability, and cost-effectiveness are the factors making market players constantly improve and launch advanced devices. Image-guided equipment, HIFU, and cryoablation are major examples of these technological advancements. Usage of cooled radiofrequency denervation technique with internally cooled radiofrequency probes to enlarge the size of the lesion is one of the emerging techniques which is anticipated to play a significant role in market expansion. This technique enables complete denervation of the sacroiliac joint which helps in pain management.

The success rate of radiofrequency/microwave ablation technology in eliminating small liver tumors is estimated to be greater than 85.0%. According to the NCBI report, the recurrence of tumors in patients opting for surgical resection ranges from 30.0% to 70.0%. On the other hand, tumor recurrence is very low (0.7-8%) in cases of radiofrequency ablation for similar tumors. Advantages of radiofrequency techniques to successfully treat tumors at early stages are expected to drive the market for tumor ablation during the forecast period.

Microwave ablation technology is anticipated to witness a remunerative market growth over the forecast period. The energy of microwave (MW) ablation device is propagating electromagnetic field, unlike electric current in a radiofrequency ablation device. This improves the application of microwave ablation technology in tissues with low electrical conductance such as bones and lungs. Major benefits of this technology include larger tumor ablation volume, consistency in high temperature, low ablation pain, and optimal heating of the cystic mass. These benefits are anticipated to support the growth of this segment. Furthermore, minimum procedure time (5-10 minutes), improved efficacy with minimal complications, and reduced hospital stay are expected to drive the segment.

The liver cancer segment dominated the market for tumor ablation and accounted for the largest revenue share of nearly 19.9% in 2020. This can be attributed to the rising incidence of bile duct cancer as well as primary liver cancer. Based on application, the market is segmented into kidney cancer, liver cancer, breast cancer, lung cancer, prostate cancer, and others. Other segment includes various types of cancer such as bone metastasis and ENT cancer. The availability of advanced methods and increasing cancer prevalence are anticipated to facilitate market growth.

Renal cancer is anticipated to experience the fastest growth during the forecast period. Radiofrequency and microwave ablation technology are effective in the treatment of renal tumors. Patients having solitary kidneys, tumor size (less than 4cm), and a slow post-surgical recovery rate are prospects for ablation of kidney tumors. According to the American Cancer Society, in 2019, the number of new cases diagnosed with renal cancer was 73,820. Additionally, with the increasing use of medical imaging, the number of diagnosed cases is expected to increase, driving the demand for treatment procedures during the forecast period.

The lung cancer segment is anticipated to grow at a rapid pace during the forecast period. This growth can be attributed to the increasing incidence of the disease. For instance, in 2018, lung cancer accounted for nearly 11.6% of total new cancer cases across the globe; meanwhile, Non-Small Cell Lung Cancer (NSCLC) accounted for 85.0% of all lung cancer cases. Radiofrequency ablation is widely used for the treatment of NSCL and is thereby anticipated to propel market growth.

The surgical ablation segment dominated the market for tumor ablation and accounted for the largest revenue share of 40.3% in 2020. Increased prevalence of liver and breast cancer and unavailability of advanced tumor ablation techniques for these particular organs are the factors estimated to fuel the segment growth. The percutaneous ablation segment is expected to exhibit lucrative growth over the forecast period. These procedures offer faster recovery, minimal scarring, and increased safety. In addition, factors such as quick surgery time, patient comfort, and cost-efficiency are anticipated to further boost the segment demand. However, higher complications associated with the system are anticipated to limit its growth, especially in hospitals lacking skilled professionals. 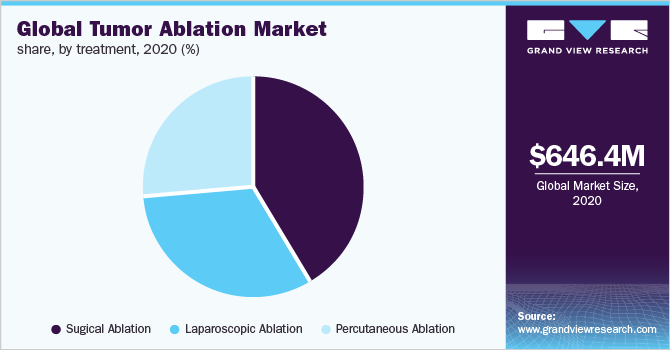 According to the NCBI report, percutaneous ablations are not feasible in about 25-55% of patients due to unfavorable tumor locations. The tumor recurrence rate is higher in percutaneous ablation, due to insufficient ablation of the tumors located deep inside the tissue. Additionally, percutaneous ablation is contraindicated in treating lesions that are very adjacent to the gastrointestinal tract, gall bladder, bile duct, and heart due to a high risk of tumor recurrence. Therefore, in such a case, laparoscopic ablation is efficient in providing long-term outcomes while simultaneously retaining minimal invasiveness. This is expected to boost the laparoscopic ablation segment growth during the forecast period.

North America dominated the tumor ablation market and accounted for the largest revenue share of 34.3% in 2020. Major factors contributing to the growth of this region include government support for quality healthcare, high purchasing power parity, availability of reimbursements, and increasing prevalence of cancer. For instance, in the U.S., the Patient Protection and Affordable Care Act (PPACA) promotes the quality and affordability of health care through health coverage policies, which reduces the cost of healthcare for individuals and the government. In addition, the precision medicine initiative in formulating tailored strategies on unique characteristics of diseases. Hence, such government initiatives are anticipated to improve the overall healthcare system, thus boosting the market growth.

Europe followed North America in terms of revenue share in 2020. A greater extent of public funding in Europe’s healthcare system has contributed to this growth. Moreover, the growing geriatric population coupled with government support to control cancer is estimated to boost the market growth in this region. For instance, the European Cancer Observatory aims to create awareness about cancer, early diagnostic techniques, and advanced, minimally invasive therapeutic options.

In Asia Pacific, the market is expected to register the fastest growth rate during the forecast period. Expanding patient population and a growing presence of major healthcare providers in rapidly developing economies such as India and China open growth opportunities. In addition, with government assistance, healthcare utilization in the Asia Pacific is improving. For instance, the Indian government provides financial assistance for poor patients suffering from cancer under the Health Minister Cancer Patient Fund (HMCPF) scheme.  This is anticipated to fuel the demand for tumor ablation devices in this region over the forecast period.

Companies are investing heavily in R&D to develop minimally invasive and innovative tumor ablative solutions with the intent to acquire opportunistic market share. For instance, in August 2019, Boston Scientific Corporation received Health Canada approval for its advanced cryoablation system named ICEfx™. The device has a smaller footprint, portable, and is a powerful alternative to existing cryoablation systems.

The market players have adopted various strategic initiatives such as product launches, partnerships, mergers, and acquisitions to sustain their position in the market. In March 2018, Auris Health announced a partnership with Ethicon to develop robotically-assisted bronchoscopy tumor ablative systems. Some of the prominent players in the tumor ablation market include:

This report forecasts revenue growth at global, regional, and country levels and provides an analysis of the latest industry trends in each of the sub-segments from 2016 to 2028. For the purpose of this study, Grand View Research has segmented the global tumor ablation market report on the basis of technology, treatment, application, and region:

b. North America dominated the tumor ablation market with a share of 34.5% in 2019. This is attributable to government support for quality healthcare, high purchasing power parity, availability of reimbursements, and increasing prevalence of cancer.

Which technology segment in the tumor ablation market has generated the largest revenue in 2020?

b. The radiofrequency tumor ablation technology segment dominated the tumor ablation market and accounted for the largest revenue share of 35.4% in 2020.

Which treatment type in the tumor ablation market has generated the largest revenue in 2020?

b. The surgical ablation segment dominated the tumor ablation market and accounted for the largest revenue share of 40.3% in 2020.

Which application type in the tumor ablation market is anticipated to grow fastest in the forecast period?

b. Renal cancer is anticipated to experience the fastest growth during the forecast period in the tumor ablation market. Radiofrequency and microwave ablation technology are effective in the treatment of renal tumors.

Which region is expected to register the fastest growth in the tumor ablation market in the forecast period?

b. Asia Pacific region is expected to register the fastest growth rate in the tumor ablation market during the forecast period, due to expanding patient population and growing presence of major healthcare providers.

What has been one of the most notable developments in the tumor ablation market?

b. In August 2019, Boston Scientific Corporation received Health Canada approval for its advanced cryoablation system named ICEfx™. The device has a smaller footprint, portable, and is a powerful alternative to existing cryoablation systems.