The global curcumin market size was valued at USD 58.4 Million in 2019 and is expected to witness a CAGR of 12.7% over the forecast period. This growth in demand is aligned to its inherent anti-cancer, anti-oxidant, and anti-inflammatory properties, which is promoting its use across end-user industries. Curcumin also finds wide applicability in skin care applications, including prevention of ring worm, eye infection, leech bites, sore skin, bruising, and swelling, which should in turn drive demand for the product over the forecast period. 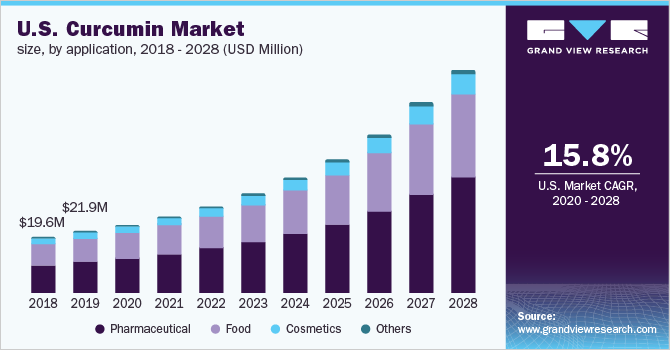 Curcumin is an active ingredient commonly extracted from turmeric and ginger. Turmeric is widely consumed in the South East Asian countries in both food and medical products accounting to its therapeutic properties. Increasing awareness among consumers towards health benefits observed upon the consumption of curcumin and its medicinal values being popular with ayurvedic medicinal formulation should drive momentum in the other parts of the world during the forecast timeframe.

Curcumin is proven to have significant health benefits along with the potential to prevent various diseases including Alzheimer’s, coronary heart diseases, and cancer.  Shift observed in consumer trends and rising awareness towards the benefits of using organic and natural ingredients in medical, cosmetic, and food applications should propagate demand over the forecast timeframe of 2020 to 2027.

Curcumin is hydrophobic and lipophilic in nature. Its application in the pharmaceutical industry is driven largely by its traditional therapeutic use. Various researchers are also underway to use different nanoparticles, such as dendrimers, polymeric nanoparticles, and nanogels as vehicles to deliver curcumin in the treatment of cancer and therapy of various neurological diseases.

Curcumin also has significant usage in tissue engineering and companies are increasingly focused on to further invest in its research to extrapolate its usage in the pharmaceutical industry majorly due to its non-toxicity. Consumers in developed economies are made well aware of these research findings and hence further growth avenues can be anticipated from the countries including U.S., Denmark, and Germany.

The cosmetics application segment is estimated to reach USD 7.9 Million by 2027. Its applicability in cosmetic application can be largely attributed to its antioxidant, anti-inflammatory, and antiaging activity. Exposure to UV radiations causes the rise in formation of free radical species which reacts with protein, DNA, and fatty acids and possibly creates irritation on the epidermis.

These free radicals also take part in damaging the skin regulatory mechanism, causing visible photo aging effects such as hyperpigmentation, wrinkles, and loss of skin firmness. Curcumin infused products can reduce these effects along with providing better skin color. Brand owners in the personal care and cosmetic verticals are increasingly using this product as an additive. 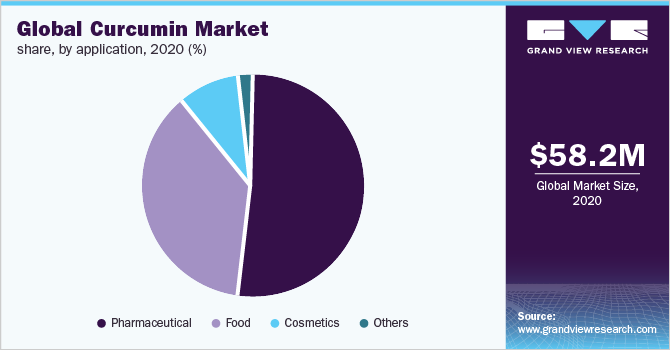 Rising consumer awareness regarding the underlying benefits of using curcumin along with consumer inclination for organically produced products should bolster its market size in the forecast timeframe. The food application segment accounted for USD 21.4 Million in 2019 and is expected to reach USD 52.0 Million by 2027 at a CAGR of 11.7% during the projected timeframe. This rise in demand in food applications can be attributed to its wide applicability as food additives owing to its ability to inhibit arachidonic acid metabolism.

Turmeric is considered to be the most widely consumed spice throughout the world and dates back for over 2000 years. Its organic functionality and no evident proof of being toxic in nature should boost its consumption in the coming years. Turmeric has found widespread adoption around the globe due to its therapeutic functionality and low rates of toxicity.

The industry in the Asia Pacific is anticipated to witness strong gains during the forecast period, accounting for a growth rate of 13.4%. Although, this region accounts for the highest share of turmeric production, however, in terms of curcumin consumption countries in the Asia Pacific region falls short when compared to other developed regions. This is majorly due to lower consumer awareness in the region towards inherent health benefits caused by curcumin.

Lower consumer awareness creates a great opportunity for brand owners to educate the population about its benefits and launch products to cater the regional demand. Rising demand for curcumin based ayurvedic and herbal personal care products is expected to fuel demand in the foreseeing years.

In North America, the market for curcumin accounted for the highest share in 2019 with a revenue percentage of 50.9%. This demand for curcumin in the region can be ascribed to rising product demand in food and nutritional supplements. North America is also the home for numerous premium cosmetic brands and these companies are increasingly inclined towards incorporation organic components in their formula, which, in turn, can create growth avenues over the forecast period.

The industry in Europe is expected to witness the highest CAGR of 14.2% during the forecast period. The region also accounts for the second largest market share in terms of volume and this can be attributed to the huge personal care and cosmetics industry present in countries including Germany, Italy, and Spain.

The industry is highly competitive and fragmented in nature and majorly driven by its applicability in the nutraceuticals and cosmetics industry. This product is an extract from turmeric and ginger and hence production plants are needed to be in the vicinity of the raw material source, which lowers down the cost of products and removes the strains observed in logistics. India is a major producer for turmeric accounting over 78.0% of the global production. Companies are increasingly concentrating on to set up their production plants in India. Favorable regulatory regimes and supportive government policies further strengthen the future of the market for curcumin in the projected timeframe.

Factors detailing the industry include territorial market share, availability of labor, production capacity, demand development in the future, the intensity of competition, and support of local government and infrastructure. Curcumin usually does not find direct application to consumers and are commonly seen to be integrated as an additive with other products. Hence, suppliers and distributors play an important role for the product to reach its demand center.

This report forecasts revenue growth at global, regional, and country levels and provides an analysis of the latest industry trends in each of the sub-segments from 2016 to 2027. For the purpose of this study, Grand View Research has segmented the global curcumin market report based on application and region: