U.S. solar PV market is expected to witness significant growth on account of growing demand in commercial and residential segments. Subsidies and favorable regulatory framework are anticipated to drive market growth over the forecast period. Furthermore, a sharp decline in equipment cost owing to a rise in installations particularly in California is expected to continue over the forecast period.

Application segments including residential, non-residential, and utility are expected to witness an increased number of installations till 2016 owing to Investment Tax Credit (ITC) subsidy which would expire on December 31, 2016. The U.S. solar PV market, being a subsidy-dependent market, is expected to witness a sharp decline in installations post-subsidy period owing to higher capital cost as compared to other forms of power generation. 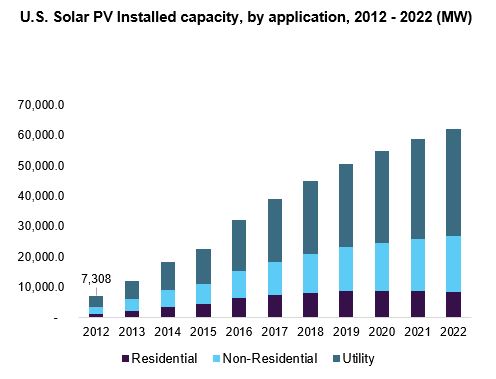 The residential sector has witnessed a significant upsurge over the past few years, on account of rising consumer awareness regarding environment protection coupled with subsidized module cost. In addition, low maintenance cost for solar PV as compared to other power generating units has resulted in a substantial demand for these modules over the past few years and the trend is anticipated to continue over the forecast period.

Module prices for solar PV have declined over the past few years owing to the presence of various federal subsidies and rise in module installations. Furthermore, raw material prices for manufacturing solar cells have also declined sharply owing to various technological and manufacturing improvements. 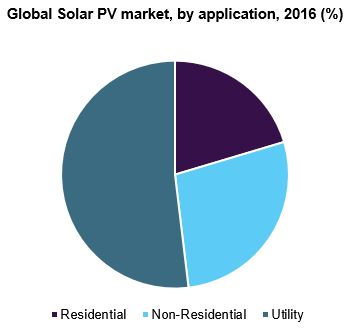 Rising prevalence of diseases such as cancer and cardiovascular diseases on account of climate dynamics is anticipated to promote phytosterols demand in pharmaceutical applications. In addition, rising awareness towards side effects associated with prescribed conventional medicines is anticipated to promote the role of naturally derived phytosterols over the next seven years.

U.S. Solar PV market is dominated by three companies, viz., Solar World, First Solar, and Sharp which together contribute to more than 60% of the market share in 2014. Suniva, SunPower, and others accounted for the remaining market share. Solar World dominated the market with its polycrystalline PV modules which accounted for over 25% market. Its module production facility in Oregon is the largest in the U.S. with an annual production of over 500 MW.

This report forecasts revenue, capacity, and volume growth in the U.S. and provides an analysis of the industry trends in each of the sub-segments from 2014 to 2025. For this study, Grand View Research has segmented the global U.S. solar PV market on the basis of application and region.