The global Ultra High Molecular Weight Polyethylene market size was estimated at USD 1.60 billion in 2018. It is expected to register a CAGR of 13.8% during the forecast period. UHMWPE is widely used for joint replacement surgeries, making medical one of the key end-use sectors for the plastic sector. The growing geriatric population in Europe, Japan, and the U.S. has prompted the need for orthopedics in these regions.

Favorable properties of the product increase its scope of application in numerous industries such as automotive, healthcare, and shipbuilding. These properties include high abrasion resistance, superior impact strength, low reactivity to chemicals and additives, higher flexibility, and w friction coefficient. These properties are anticipated to drive the demand for UHMWPE in near future. 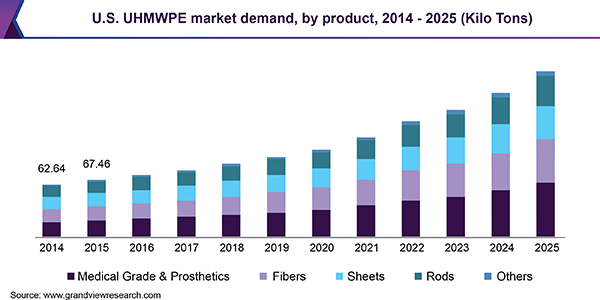 UHMWPE is increasingly being used in the defense industry for personal protective equipment and anti-ballistic applications. Several government initiatives are encouraging the usage of this product over other polymers for such applications. Ongoing military R&D investments by the U.S. to improve the performance of helmets and body armor is expected to steer product demand over the next few years.

Favorable regulations along with growing innovations have resulted in an enhancement in mechanical properties and high-energy absorption value of UHMWPE. As a result, it is commonly used in bulletproof vests, impact plate, and helmet production. This rise in the scope of application is anticipated to have a positive impact on the market during the forecast period.

Joint replacement surgeries for knees and hips have witnessed rapid uptrend over the last five years. A shift in trend wherein people aged 45 to 60 years are increasingly opting for joint replacement surgeries have been observed in the recent past. Technological advancements have resulted in better prosthetics, longer lifespan, and more comfort for patients. Increasing geriatric population in several countries such as U.S., Canada, and Japan, is expected to drive the demand for medical UHMWPE over the long term.

Owing to its significant resilience against wear and tear coupled with its ability to be blended with additives to offer hydrophilic and flame resilient characteristics has steered UHMWPE demand in applications such as wear strips, chain guides, bin liners, and pulleys. Its inherent hydrophobic characteristic has enabled its demand in sectors requiring ease of flow while handling wet products.

Ultra-high molecular weight polyethylene is characterized by improved fiber structure and finds applications in heavy-duty industries for producing pulleys and truck liners. Moreover, growing innovations have resulted in an enhancement in its mechanical properties and high-energy absorption value for UHMWPE. As a result, it is commonly used in bulletproof vests, impact plate, and helmet production.

Sheets are commonly used in industrial sectors in the form of liners. These liners are used in various heavy transport vehicles, troughs, bins, hoppers, and silos for enabling ease of flow of materials or products. Niche applications such as recreational equipment and agricultural machinery have also gained prominence owing to the rising need for durable components with enhanced abrasion resistance.

Owing to its self-lubricating characteristic, the product is used in various rollers, guides, plates, and liners. It is used across various parts of logistic equipment. Its hydrophobic characteristic has amplified its usage in transferring wet products largely in food and beverage and pulp and paper industries. Niche applications such as pads for heavy equipment movers, snow removers, skiing equipment, and boats are also expected to steer growth as UHMWPE can enhance their operating life.

Medical grade and prosthetics led the application segment of the Ultra-High Molecular Weight Polyethylene market and is expected to reach USD 1.37 billion by 2025. Earlier orthopedic surgeries were prescribed to patients above 60 years of age because the joint replacements had a life of about 15 to 20 years. However, with rapid technological innovations, joint replacements have a higher life span and are being increasingly adopted by the younger generation. 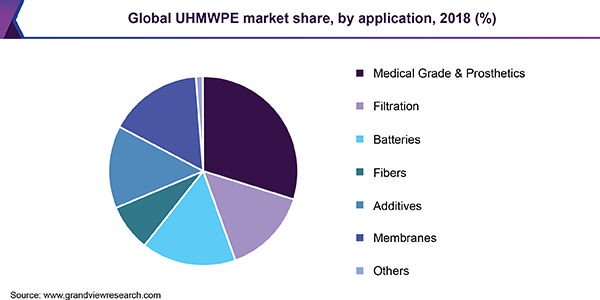 Over recent years, industry participants have taken major steps to process UHMWPE and to improve their properties. Cross-linked polymers with additives such as Vitamin E as antioxidants are widely being accepted as prosthetics for hip replacements. Hip and knee replacement surgeries have seen a rapid rise, especially among the comparatively younger generation aged 40 to 55 years, over the past few years.

As a durable polymer, the product is ideally used as a uniform porous medium in both general and fluid-based environments. Reliability and favorable regulations are expected to drive the demand from the filtration industry. Higher product prices make it affordable, especially in developed regions.

North America led the global Ultra High Molecular Weight Polyethylene (UHMWPE) market in the recent past and is expected to expand at a CAGR of over 10.0% from 2019 to 2025. The growing geriatric population coupled with increasing joint replacement surgeries has played a vital role in driving growth in the U.S.

The presence of a large number of automotive manufacturing facilities across the U.S. and Canada contributes to the demand for battery separators and is expected to have a positive impact on the overall market for UHMWPE. Ongoing investments in battery manufacturing facilities in North America and the Asia Pacific is expected to further boost the demand.

Most countries in the European Union have reported an increase in hip and knee replacement surgeries, which in turn is expected to assist the UHMWPE market over the next seven years. Overall, the medical grade and prosthetics market is estimated to witness the highest growth over the forecast period followed by the batteries market.

The presence of major end-use industries and their significant growth in the Asia Pacific is expected to have a positive impact on the UHMWPE market in near future. Automotive manufacturing hub in China, Japan, and South Korea is expected to drive the regional industrial output over the next few years. The reported increase in healthcare spending coupled with growing disposable income in various countries is estimated to benefit the regional medical sector in the forthcoming years.

Braskem, Celanese Corporation, and Lyondell Basell led with over 75% of the total market share in 2018. Frequent acquisitions were witnessed over the past five years. These strategies are expected to improve the competitiveness and production capacity of the companies to cater to the rapidly rising demand from the Asia Pacific and North America.

Companies are investing heavily in R&D to develop premium products such as longer-lasting prosthetics and lightweight personal protective equipment. Such initiatives offer ample prospects for the existing as well as new market players to invest in R&D and to enhance their product portfolio.

In 2014, Celanese Corporation acquired Cool Polymers as well as invested in a technological and commercial center in Mexico to strengthen its presence in Latin America. While Braskem announced its plan to build a UHMWPE plant in Texas to increase its production capacity and complement its current production in Brazil.

This report forecasts revenue growth at global, regional, and country levels and provides an analysis of the latest industry trends in each of the sub-segments from 2014 to 2025. For this study, Grand View Research has segmented the global Ultra High Molecular Weight Polyethylene (UHMWPE) market report based on the product, application, and region: