The global ureteral stents market size was valued at USD 422.9 million in 2019 and is expected to grow at a compound annual growth rate (CAGR) of 7.0% from 2020 to 2027. The growing incidence of urological and kidney-related disorders and the adoption of technologically advanced stents for safe and effective urological procedures are the major factors driving the market. A ureteral stent is a thin hollow tube introduced into the ureter to treat blockage of the urine flow from the kidney. These stents are utilized to treat various conditions in patients with kidney stones and urinary incontinence. These ureteral stents allow the passage of residual fragments without obstructing the ureter. In fact, any form of urological and kidney-related procedures mostly requires a ureteral stent to allow proper healing of the ureter. Furthermore, the prevalence of prostate cancer and tumors or narrowing/scarring of the ureter requires the need for ureteral stents during or after the treatment. 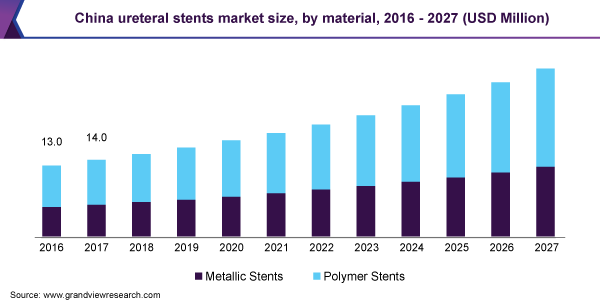 For instance, according to the estimates of the American Cancer Society, around 191,930 men will be diagnosed with prostate cancer in 2020. Thus, the increasing prevalence of these incidences has surged the demand for ureteral stents, thereby, expected to propel market growth over the forecast period. The worldwide increasing prevalence of urolithiasis (kidney and ureteral stones), and urinary incontinence owing to various factors such as the rising quantity of calcium in diet, alcohol intake, and negative lifestyles are major factors driving the market. For instance, as per the study published in the National Center for Biotechnology Information (NCBI), in 2018, an estimated 12.0% of the Indian population is suffering from urolithiasis and out of which 50.0% may end up with the loss of kidney functions. Similarly, it is estimated that 1 in 11 people are suffering from kidney stones in the U.S. Ureteroscopy and ureterorenoscopy require the need for ureteral stent during the treatment of kidney stones amongst other methods, henceforth, driving the market. Thus, negative lifestyle habits such as alcohol drinking coupled with a rise in the number of smokers and obese population with dietary irregularities are the few factors inducing such disorders or conditions. This is expected to boost the growth of the market for ureteral stents.

In recent years, countries such as the U.S. and Canada have witnessed an increased number of urological surgeries due to the rising number of patients suffering from kidney-related disorders. Approximately 80.0 million people, which is around 1 in 3 American adults are at risk for chronic kidney disease and it is the ninth leading cause of death in the U.S.A. As per the National Institute of Diabetes and Digestive and Kidney Disease (NIDDKD) statistics, in 2017, more than 661,000 Americans had renal failure, of these, 200,000 people are living with a kidney transplant. Thus, the growing number of kidney failures has increased the number of renal transplants and has surged the demand for ureteral stents for post-operative ease. Thus, it is anticipated to boost the growth of the market for ureteral stents over the forecast period. Moreover, favorable reimbursement and well-established healthcare infrastructure in these countries are also other major factors contributing to the growth of the market.

In addition, technological advancements in ureteral stents such as the use of biodegradable materials which includes antibacterial coatings that have led to efficient and improved outcomes related to urinary and kidney disorders. Companies are proactively involved in product developments, which reduce ureterovesical reflux, stent migration, and tissue irritation during the procedures. For instance, biocompatible and flexible polymer ureteral stents such as Polyurethane and Silicone double loop ureteral stents offered by Coloplast are highly adopted by professionals for long-term implantation during urological surgeries. This is expected to positively impact market growth during the forecast period.

The polymer ureteral stents segment dominated the ureteral stents market and accounted for a revenue share of 64.8% in 2019. The segment is expected to witness the highest CAGR of 7.2% over the forecast period. Polymer ureteral stents are further sub-segmented into silicone stents, polyurethane stents, and hybrid stents. The growth of this segment is driven due to the increasing adoption of these stents by physicians and patients. As the polymer is the most preferred material for stents production due to various benefits associated with it such as enhanced flexibility and biocompatibility than compared to the metallic stents. Due to these reasons, polymer stents are considered as the gold standard material for long-term implantation which reduces the rate of infection and complications. Thus, the aforementioned factors will significantly drive segment growth in the future.

Also, the polymer ureteral stents support minimally invasive surgical procedures and offer reduced healing time which results in decreased hospital stay. Due to this reason, these stents are highly adopted and are preferred by professionals and patients for associated surgeries. Thus, the regulatory agencies are increasing approvals for polymer-based ureteral stents across various regions due to several advantages. This is expected to fuel the growth of the market for ureteral stents during the forecast period.

The kidney stones segment dominated the market and accounted for a revenue share of 36.8% in 2019. The growth of this segment is driven by factors such as an increase in the adoption of a sedentary lifestyle such as dietary habits that leads to urolithiasis. For instance, according to a study published in the NCBI in 2018, it is estimated that around 600,000 people in the U.S. suffer from urinary stones every year. Ureteroscopy and ureterorenoscopy require the need for ureteral stent during the treatment of kidney stones amongst other methods, henceforth, driving the segment growth. 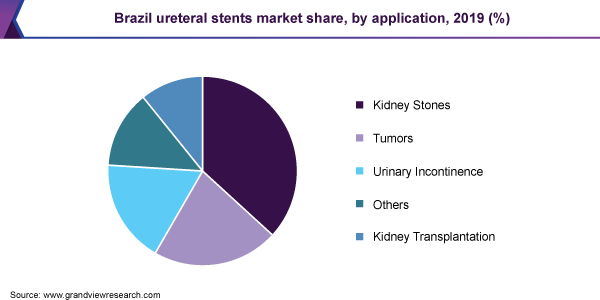 Whereas, the Others segment is expected to witness the highest CAGR of 7.8% from 2020 to 2027. This is due to the increasing prevalence of prostate cancer, Benign Prostatic Hyperplasia (BPH), narrowing of the ureter, or scarring on the wall of the ureter (ureteral stricture), and other conditions. These conditions are highly prevalent in males’ as a result, constricting urine flow and difficult to empty the urinary bladder. In order to deal with such conditions, ureteral stents are required. Thus, with the rising prevalence of these conditions, the Others segment is expected to grow at a significant rate.

North America dominated the market and accounted for a revenue share of 33.0% in 2019 and is anticipated to witness the same trend over the foreseeable future. Sedentary lifestyle resulting in urological and kidney-related disorders such as kidney stones, chronic kidney disease, and urinary incontinence is primarily driving the market in North America. Furthermore, the presence of key market players such as Boston Scientific Corporation, Medline Industries, and Coloplast are also contributing towards market growth in the region. Moreover, increasing government healthcare spending creates opportunities for growth. For instance, according to the National Health Expenditure Accounts (NHEA ) 2018, healthcare expenditure in the U.S. increased by 4.6% and reached USD 3.6 trillion (USD 11,172 per person).

Asia Pacific is expected to witness the highest CAGR of 7.5% over the forecast period. The market is driven by a large aging population with kidney-related disorders, rising urological procedures, improving healthcare infrastructure in developing economies. Moreover, the growing medical tourism industry of developing economies such as India, China, and Japan are likely to contribute to market growth. In addition, rising healthcare expenditure by the government, an increase in the number of hospitalizations, improved reimbursement scenario, and low manufacturing cost of ureteral stents, are few other factors aiding the growth of the market in this region.

Key companies are stressing on Research and Development (R&D) to introduce technologically advanced products to stay ahead in the market. For instance, University Hospitals Cleveland Medical Center is developing the RELIEF Ureteral Stent, which is in the investigational phase (clinical trials), to improve urinary reflux and reducing irritative bladder symptoms to improve the patient care. It is a disposable ureteral stent with improved designs, which helps in the provision of the traditional function of allowing the passage of urine from the kidney to the bladder. This is expected to increase market growth during the forecast period.

Companies are involving into collaborations, acquisitions, and mergers, which aim to bolster their product portfolio, manufacturing capabilities, and provide competitive diversity. For instance, in June 2019, Merit Medical Systems acquired Brightwater Medical, Inc. -manufacturer of ureteral blockages treatment devices. Through this acquisition, the company will align Bright water’s biliary stent system with its product portfolio and market the products in the overseas market. Similarly, in June 2019, Boston Scientific announced the acquisition of Vertiflex, Inc. to improve its portfolio of minimally invasive devices. The emerging companies are also trying to develop technologically advanced products in order to increase market penetration. This is anticipated to boost the company’s revenue in the coming years. Some of the prominent players in the ureteral stents market include:

This report forecasts revenue growth at global, regional, and country levels and provides an analysis of the latest in industry trends in each of the sub-segments from 2016 to 2027. For the purpose of this study, Grand View Research has segmented the global ureteral stents market report on the basis of material, application, and region:

How big is the ureteral stents market?

What is the ureteral stents market growth?

Which segment accounted for the largest ureteral stents market share?

b. North America dominated the ureteral stents market with a share of 33.08% in 2019. This is attributable to rising urological and kidney-related disorders such as kidney stones, chronic kidney disease, and urinary incontinence.

Who are the key players in the ureteral stents market?

What are the factors driving the ureteral stents market?

b. Key factors driving the ureteral stents market growth include an increase in the incidence of urological diseases, a rise in the number of kidney transplants, and a rising geriatric population with kidney disorders.