The U.S. assisted living facility market size was estimated at USD 73.6 billion in 2018 and is expected to register a CAGR of 6.4% over the course of the forecast period. Individuals residing in assisted living facilities (ALFs), largely senior citizens, seek companionship, security, and assistance with daily activities. According to the U.S. Census Bureau, the percentage of senior population above the age of 65 stood at 13.0% in 2010, which is expected to reach more than 20.0% by 2030.

An assisted living facility does not abide by federal regulations, therefore, cannot claim Medicare reimbursement. This is the major restraining factor as cost is one of the primary factors potential tenants take into consideration while forming their decisions. However, this scenario is anticipated to improve as almost 40 states either provide or are planning to partially reimburse these services through Medicaid.Increased life expectancy, growing income from senior population, and the desire to live in senior housing communities for better healthcare and quality of life are expected to fuel the market over the forecast period. Adults suffering from various mental illnesses require prolonged assistance to sustain in mainstream society. In the U.S., mental illness was considered to be the most expensive disorder, costing around USD 201.0 billion annually. This is expected to render exponential growth in the assisted living industry. The approximately 77.0 million baby boomers that are planning to retire over the next two decades are also likely to contribute to market growth in the country. 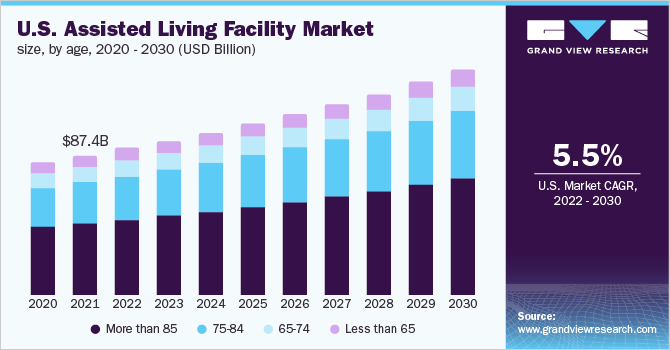 On the basis of gender, the U.S. assisted living facility market is segmented into women and men. Women held the dominant share in 2018 and will also emerge as the fastest-growing segment over the course of the forecast period. An assisted living facility is a long-term senior care facility that provides personal care support services, such as social and recreational activities, housekeeping, meals, exercise, and wellness services. Greater life expectancy of women, higher rates of disability and chronic health problems, and lower income compared to men are some of the major factors behind the dominance of this gender group in assisted living facilities.

On the basis of age, the U.S. market is segmented into more than 85 years, 75 to 84 years, 65 to 74 years, and less than 65 years. The segment of more than 85 years of age accounted for the largest share in 2018 and is also predicted to register the fastest growth over the forecast period. According to the U.S. Census Bureau, by 2030, senior citizens are expected to make up for over 20.0% of the world’s population and approximately 80 million seniors are likely to reside in the U.S. in need of care. This is likely to increase the demand for professional care givers and new assisted living facilities. According to Aging.com, seniors in the U.S. will need about two million housing facilities by 2040 to provide adequate living space for those in need of care. 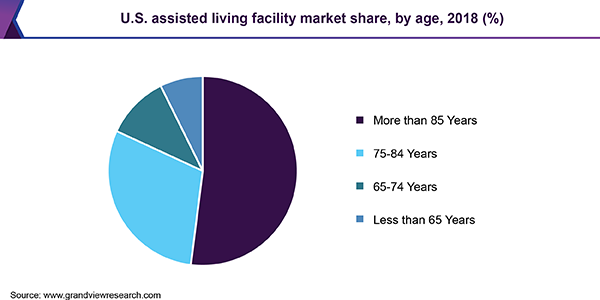 The concept of continuing care retirement communities has been gaining traction among seniors with stable financial means. Such a facility is known to cater to tenants as young as 50 years of age. The idea behind these communities is that “seniors” do not have to relocate when additional care is needed as time passes. As a result, the less than 65 years segment is likely to receive a moderate boost over the forecast period.

Leading players are looking to strengthen their position in the industry through activities such as partnerships, collaborations, mergers, and accusations. For instance, in June 2015, Genesis Healthcare entered into an agreement with Revera Assisted Living, Inc. for purchasing asset. Under the agreement, Genesis Healthcare acquired 24 skilled nursing facilities from Revera Assisted Living, Inc. and its contract rehabilitation business.

This report forecasts revenue growth at country level and provides an analysis on the latest industry trends in each of the sub-segments from 2015 to 2026. For the purpose of this study, Grand View Research has segmented the U.S. assisted living facility market report based on gender and age: