The U.S. biochar market size was estimated at USD 125.3 million in 2020 and is expected to expand at a compound annual growth rate (CAGR) of 16.8% from 2021 to 2028. This is attributed to growing requirements for the product to improve crop yields have resulted in increased utilization of fertilizers in the agricultural sector, thereby leading to increased acidity levels in the soil. In order to neutralize these soils, carbon-based additives such as compost and the product are gaining preference. 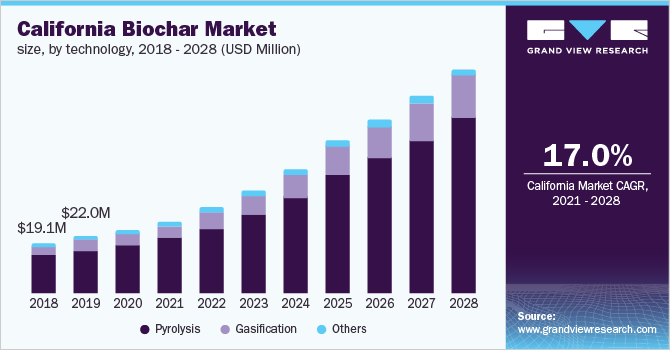 The product is a commercial product majorly used in livestock and animal feed industries. It is commonly produced by the thermal decomposition of plant-based biomass. While wood is the primary raw material used in the production of biochar, the other raw materials include woody debris, organic wastes, and manure litter.

The product is in the introduction stage of the product lifecycle in the U.S. With a rise in new farming systems and the proliferation of substitutes to conventional inorganic soil amendment products, some farmers are trying to become aware of various organic matters including biochar and their benefits. The U.S. government is also making efforts to promote the use of the product in agriculture.

According to an article published by Wiley, as of December 2018, the U.S. had a total number of 35 policies that directly or indirectly support and promote the use of biochar. Some of these policies are oriented toward energy and food production, environmental remediation and climate change management, and agricultural waste management. Among the 35 programs, 15 offer financial benefits, 8 have R&D funding, and the others help in generating financial awareness.

The U.S. EPA has released new rules for governing the production and consumption of biochar in the country. EPA is governing emissions of Commercial/Industrial Solid Waste Incinerators (CISWI) under the Resource Conservation and Recovery Act, which has generated norms for manufacturers regarding the disposal of waste produced during the manufacturing process.

As the major feedstock is woody biomass, the U.S. Forest Service is projected to have a deep interest to supply the raw material to local product manufacturers. The trees and vegetation destroyed due to fire salvage and wildlife reduction projects generate unsalable waste, which can be used for biochar production.

In terms of revenue, the pyrolysis segment dominated the market for biochar in the U.S. and accounted for a share of 83.0% in 2020. This high share is attributable to the manufacturing of biochar by using pyrolysis owing to its high-quality product and large production quantity. The convenience factor and easy availability of equipment play a major role in the adoption of the pyrolysis method for manufacturing biochar. In addition, small manufacturing facilities majorly prefer pyrolysis technology for biochar production as the setup is less costly with low complexity compared to its counterparts.

The gasification segment is expected to witness a CAGR of 16.9% in terms of revenue over the forecast period. This high share is attributed to the technological superiority of this process. Gasification is similar to pyrolysis, wherein the biomass is heated in the presence of limited oxygen, which helps break down the woody biomass yielding synthetic gas in the process. This technology has witnessed a rise in demand on account of the growing need for electricity in distributed energy systems.

In terms of revenue, the agriculture application segment dominated the market and accounted for the largest share of 89.0% in 2020. This high share is attributable to the increasing use of biochar in the agriculture sector to enhance soil fertility, improve plant growth, and provide crop nutrition. It is responsible for improving crop yield and therefore, enhancing overall productivity. Farmers are the most important customers in the market. Major application areas of agriculture include gardening, horticulture, field crops, landscaping, and turfs.

Hemp farming which started in California in 1996 is currently gaining prominence as various medical practitioners are advising medical marijuana. States in the U.S. have started allotting acreage for the cultivation of hemp opening up a new market for product manufacturers. California is expected to remain the major state but is expected to face tough competition from the states of Colorado and Montana. 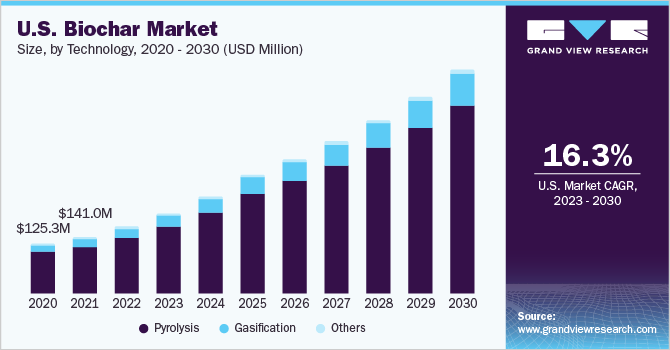 The major factor limiting the growth of this segment is the lack of regulatory support. The application of the product in animal feed has been prevalent in Europe but the lack of support and ambiguity surrounding the grades is expected to have a negative impact on the overall market growth.

California dominated the U.S. biochar market and accounted for the largest share of 19.3% in terms of revenue in 2020. The country is anticipated to witness a CAGR of 17% from 2021 to 2028. The growth in demand is attributed to rising agricultural operations in the state of California. It produces over 400 varieties of cash crops with leading products such as almonds, avocado, marijuana, rice, grapes, and strawberry. The consumption of the product is expected to be the largest in this state owing to increased yield and rising awareness among farmers.

In addition, the adoption of organic farming has boosted the consumption of biochar in the state. California has the largest number of certified organic farmers in the U.S. California accounts for 90.0% of the organically grown nuts and almonds in the country. Biochar has good water retention ability and thus, is used as a major soil additive in California as the country faces a major water crisis.

In the U.S., Texas is the second-largest state involved in the consumption of the product. The vast number of farms and land under agricultural use is driving the demand for biochar in the state. In addition, the market benefits from the presence of a substantial number of manufacturers in the state. Texas is expected to witness the consumption of large quantities of the product in animal feed as cattle account for over 50% of the agricultural economy.

The U.S. biochar industry being in the nascent stage is projected to have significant opportunities for development. The major focus of the manufacturers is to increase awareness regarding the product. Industry participants are also focusing on developing low-cost and reduced carbon emission manufacturing techniques, which would result in low production and end-product cost. Major players have private or government support for R&D and hence are focusing on using cost-effective and quicker manufacturing techniques.

Some companies are also experimenting to use the product in other application areas, as it is termed as a safe and environment-friendly product. For instance, Biochar Supreme developed a method of treating stormwater using biochar. In this method, biochar is filled in socks to treat pipelines, basins, and manholes. Some of the prominent players in the U.S. biochar market include

This report forecasts revenue growth at country levels and provides an analysis of the latest industry trends in each of the sub-segments from 2017 to 2028. For the purpose of this study, Grand View Research has segmented the U.S. biochar market report on the basis of technology, application, and state:

Which segment accounted for the largest U.S. biochar market share?

b. In terms of revenue, the pyrolysis segment dominated the U.S. biochar market and accounted for a share of 83% in 2020. Biochar manufacturing is dominated by pyrolysis owing to its high-quality product and large production quantity.

Who are the key players in U.S. biochar market?

What are the factors driving the U.S. biochar market?

b. The rising need for soil remediation and ascending demand for organic food are the key drivers for the U.S. biochar market.

How big is the U.S. biochar market?

What is the U.S. biochar market growth?