The U.S. contraceptive market size was valued at USD 7.6 billion in 2017 and is expected to register a CAGR of 5.3% over the forecast period. Advent of newer products in the market has increased the contraceptive options, thereby augmenting the market growth over the past few years. For instance, the launch of nonhormonal products, such as sponge and diaphragm in 2009 and 2015 respectively, opened new options for pregnancy prevention.

Thus, constant development of advanced products is likely to be the major factor driving market development. For example, in July 2015, a new diaphragm, Caya, was launched in U.S. after 50 years of gap. Increasing awareness regarding long-acting reversible contraceptive methods among teens in the region is also expected to augment the market growth over the forecast years. 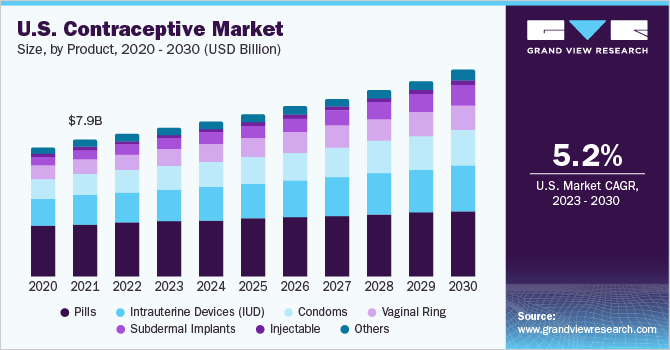 Moreover, government efforts encouraging the usage of contraceptive methods will boost the product demand. The U.S. government supported the efforts of global Family Planning and Reproductive Health (FP/RH) for 50 years and is one of the largest donors to the FP/RH in the world. According to the Centers for Disease Control and Prevention (CDC), there are about 61 million women of reproductive age (15 – 44) in U.S. Thus, presence of large target population base will drive the market further.

High investments by prominent companies for commercialization of effective and long-term reversible contraceptives have increased the awareness levels about these products. For instance, the success rate of a subdermal implant is more than 99% as it is easy to use. In August 2018, the U.S. FDA approved new vaginal ring, Annovera, for pregnancy prevention. It is a combined hormonal contraceptive and is the first vaginal ring that can be used for an entire year. Such approvals by the U.S. FDA are also likely to fuel the market growth in the coming years.

Based on product type, the U.S. contraceptive market has been segmented into pill, condom, diaphragm, sponge, vaginal ring, subdermal implant, Intrauterine Device (IUD), patch, and injectable. In 2017, contraceptive pill segment accounted for the largest share of the market and is expected to maintain its dominance during the forecast period. This can be attributed to early entry advantage and availability of several products and lower cost generic options.

Subdermal implant segment is expected to witness the fastest growth during the forecast period due to high success rate of these implants and the ability to provide long-term protection. Currently there are two subdermal implants, Implanon and Nexplanon, commercialized in U.S. The condom segment accounted for the second-largest share of the regional market in 2017. This growth was attributed to the factors, such as availability of different options, ability of these products to provide protection from Sexually Transmitted Diseases (STDs) and ease of use. 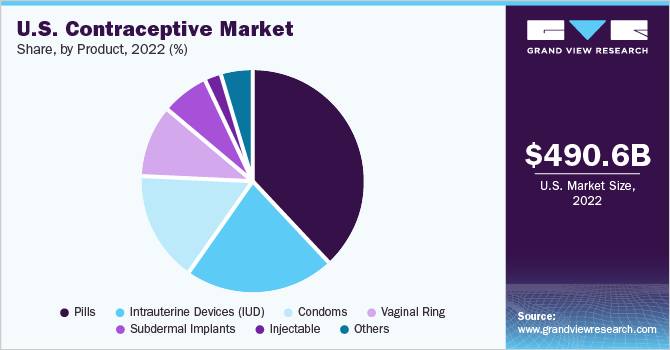 The segment will expand further over the forecast period as companies are focusing on R&D to develop newer and advanced products. For instance, the development of thinner and lubricated condoms is expected to increase the segment growth. The IUD segment also accounted for a significant market share in 2017 due to long-term reversible protection offered by these devices and availability of nonhormonal devices and different product options, such as, ParaGuard, Mirena, and Liletta. ParaGuard is the nonhormonal IUD whereas Mirena and Lilletta are hormonal IUDs.

Some of the key companies in the are Teva Pharmaceutical Industries Ltd.; Bayer AG, Reckitt Benckiser Plc; Pfizer, Inc.; Cooper Surgical, Inc.; and Merck & Co. Very few companies are operating in the diaphragm, sponge, patch, and subdermal implant segments of the industry due to stringent government regulations. Thus, the market is highly fragmented and competitive, particularly for the oral contraceptive pills segment.

Partnerships, M&A, and product innovation are the key strategies undertaken by most of the prominent companies to strengthen their presence in the regional market. For instance, in November 2017, the CooperSurgicals, Inc. acquired the global rights of PARAGARD Intrauterine Device (IUD) from Teva Pharmaceutical Industries Ltd. PARAGUARD is the only nonhormonal IUD in the U.S.

This report forecasts revenue and volume growth at country level and provides an analysis of the latest industry trends in each of the sub-segments from 2014 to 2025. For the purpose of this study, Grand View Research has segmented the U.S. contraceptive market report on the basis of product: