The U.S. craniomaxillofacial devices market size was valued at 955.6 million in 2017. It is anticipated to register a CAGR of 6.9% during the forecast period. Increasing the incidence of road accidents due to industrialization and urbanization has driven the market. According to the U.S. National Safety Council report, traffic deaths increased to 6.0% from 2015 to 2016. A total of 40,200 accidents were reported in 2016 and the record was found to be the largest in more than half a century. 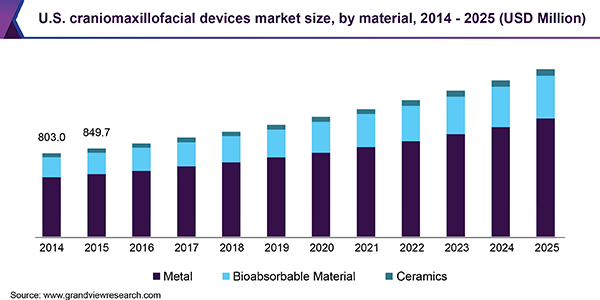 Surging demand for minimally invasive surgeries and the growing incidence of facial fractures is estimated to fuel the demand for craniomaxillofacial devices in the coming years. A growing number of battlefield injuries and subsequently rising demand for associated CMF treatments are also expected to bode well for the market during the forecast period. According to a report by the American Association Of Oral And Maxillofacial Surgeons, a total of 4,783 CMF battlefield injuries were reported in 2016.

Moreover, rising concerns regarding physical and aesthetic appearance among youth have been working in favor of the market. Benefits associated with these devices such as less recovery time, painless procedure, safety, efficacy, and less hospital stay are also likely to spur the growth of the market over the forecast period.

Furthermore, increasing the incidence of facial deformities due to genetic disorders and trauma requiring cosmetic surgeries is impelling the demand for craniomaxillofacial implants. According to a report published by the American Society of Plastic Surgeons, the total number of minimally invasive cosmetic procedures was 13,945,388 in 2016. It is poised to grow by 4% every year. This represents the overall growth in CMF surgeries, which is projected to boost the demand for the product in the coming years. Also, supportive insurance policies facilitating CMF surgeries such as Medicare are anticipated to bolster the growth of the market.

MF plate and screw fixation accounted for the largest revenue share in the market in 2017 owing to high adoption in different surgeries such as orthognathic, tumor removal, deformity correction, and cranial fixation. MF plates are widely used for cranial trauma, post-injury facial reconstruction, tumor removal, orthognathic procedures, pediatric procedures, and correction of deformities. According to a report by the American Society of Plastic Surgeons (ASPS), there were about 220,000 maxillofacial and craniofacial procedures performed in the country in 2016.

The temporomandibular joint (TMJ) replacement segment is estimated to register the fastest growth during the forecast period, owing to an increasing number of sports injuries and cranial fractures and spiraling demand for facial augmentation. It has various applications including arthritic conditions, fused joints, abnormalities, degenerated joints, and fractures. The devices also help in reducing jaw pain and interference with eating and increasing mouth opening capacity.

Metallic CMF implants were the most prominent material segment in the U.S. craniomaxillofacial devices market in 2017, owing to their advantages such as rigid properties, low corrosiveness, and cost-effectiveness as compared to bioabsorbable and ceramics materials. Stainless steel, titanium, Vitallium, chromium, brass silver, and copper are some of the commonly used metals in the internal rigid fixation of the facial skeleton. Alloys of nickel, chromium, copper, cobalt, aluminum, and molybdenum stainless steel are used in the surgery. In 2016, FDA approved 3D printed titanium CMF implant manufactured by BioArchitects.

Bioabsorbable materials are expected to exhibit lucrative growth in the market as they can be easily assimilated by the human body and negates the probability of second surgery. Technological advancements are also playing an important role in the growth of the segment. The rising popularity of SR technology and advantages associated with it such as easily handled, biocompatible, biodegradable, and reliability has been positively influencing the growth of the overall market. Copolymeric SR devices such as PLGA, biosorb FX, and biosorb PDX are some technological advancements in the clinical application of bioabsorbable materials. 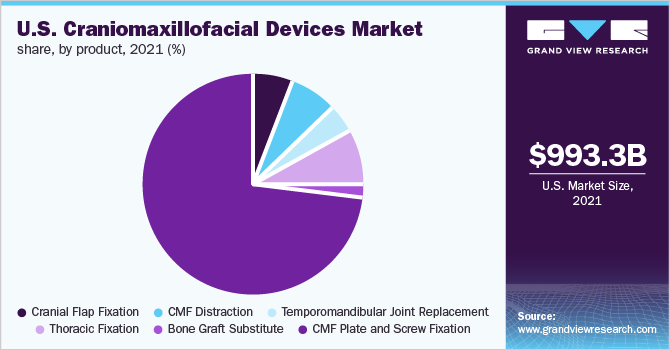 Plastic surgery is likely to witness a growth rate of 6.6% in the U.S. during the forecast period. The surgery is used to treat aesthetic skull problems such as the sloped forehead, frontal bossing/ forehead horns, residual fontanelle depressions, sagittal ridge/crest, flat back of the head, occipital knob/protuberance, excessive temporal fullness (too wide of head), temporal depressions (too narrow of head), prominent temporal lines, and occipital asymmetries. According to a report by ASPS, a total of 15.9 million cosmetic surgeries were performed in the U.S. in 2015, which were 2.0% more than in 2014.

The market is marked by the presence of various small and large companies. The market is competitive. It is dominated by participants such as DePuy Synthes; Zimmer-Biomet Inc.; and Medtronic Inc. Companies are focusing on implementing strategies such as new product launch, regional expansion, partnership, and distribution agreements to increase their revenue share.

This report forecasts revenue growth at the country level and provides an analysis of the industry trends in each of the sub-segments from 2014 to 2025. For this study, Grand View Research has segmented the U.S. craniomaxillofacial devices market report based on the product, material, and application.

How big is the U.S. craniomaxillofacial devices market?

What is the U.S. craniomaxillofacial devices market growth?

b. MF plate and screw fixation dominated the U.S. craniomaxillofacial devices/system market with a share of 72.2% in 2019. This is attributable to high adoption in different surgeries such as orthognathic, tumor removal, deformity correction, and cranial fixation.

Who are the key players in U.S. craniomaxillofacial devices market?

What are the factors driving the U.S. craniomaxillofacial devices market?

b. Key factors that are driving the market growth include increasing incidence of sports and facial fractures, rising demand for minimally invasive surgeries, and technological advancements in management of craniomaxillofacial injuries.