The U.S. gadolinium-based contrast media market size was valued at USD 527.9 million in 2019 and is expected to grow at a compound annual growth rate (CAGR) of 4.7% from 2020 to 2027. This growth can be attributed to the increasing prevalence of long term chronic diseases and technological advancements. The market is majorly driven by the growing prevalence of complex morbidities and label expansion such as mergers and acquisitions by key players. According to the Centre for Disease Control and Prevention, six out of ten people in the U.S. suffer from chronic disease and four out of ten people suffer from comorbidity. These chronic diseases are the leading causes of death and disability in the country and leading drivers of the Nation’s $3.5 Trillion in Annual Health Care Costs. By 2025, chronic diseases will affect an estimated 164.0 million Americans (49%) of the population. 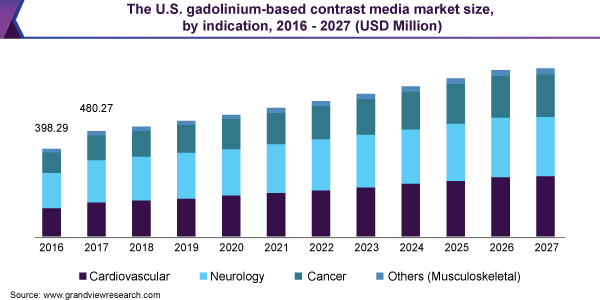 Furthermore, rising technological advancements in the field of imaging and contrast agents is a driving factor for the growth of the gadolinium-based contrast media market. Diagnostic imaging modalities are being increasingly employed because of advancements in the underlying technology, ranging from equipment to administration technology. The advent of digital solutions for precise and effective management of contrast agent injection is anticipated to propel the market. For instance, in 2018, Guerbet launched Contrast&Care 2.0, a digital solution that connects all CT, Cath laboratory, and MRI injectors and has smart reader & connectivity features, enabling users to scan and read data on their smartphones as well as computers.

Moreover, the key players in the market like Bayers and GE Healthcare are adopting strategies such as mergers and acquisitions and indication extension to enhance their market position, thereby increasing their presence with wider geographical reach and stronger portfolios. Disease indication extension is surging in the market as it enables companies to gain the confidence of select population subsets. For instance, in July 2019, Bayers AG announced the FDA approval of Gadavist (gadobutrol) injection for cardiac Magnetic Resonance (MR) imaging to assess myocardial perfusion (stress, rest) and late gadolinium enhancement in adult patients suffering from Coronary Artery Disease (CAD), making Gadavist the only contrast agent FDA approved for use in cardiac MR.

However, there are serious concerns about the risk of gadolinium retention in the body. It was stated that GBCAs can cause Nephrogenic Systemic Fibrosis (NSF) when used in patients with kidney disease. Therefore U.S. FDA issued a warning to be added to labels as contraindications for at-risk patient subsets including pediatric patients, pregnant women, and patients with kidney conditions. The rising concerns regarding gadolinium retention in the patient’s body are likely to hinder the market.

The extracellular agents segment held the largest share of nearly 45.3% in terms of revenue in the market. The segment is expected to reciprocate the highest CAGR over the forecast period. This can be attributed to the most commonly used agents in the imaging of tumor and inflammation, as well as in Magnetic Resonance Arthrography (MRA) as it improves the visibility of internal body structures. Based on type, the U.S Gadolinium-based contrast media market is broadly categorized into extracellular agents, blood pool agents, and hepatobiliary agents.

Blood pool GBCAs are used exclusively for MRA. Since blood pool agents remain relatively long in the blood and have longitudinal relaxation time than extracellular agents, they enable the extension of imaging time. These agents are broadly categorized into low-molecular-weight and macromolecular agents. Macromolecular agents are not used for clinical purposes. Gadofosvesettrisodium (Ablavar) is one of the most important low-molecular-weight agents, which binds non-covalently to albumin in the human plasma.

Hepatobiliary agents were mainly designed to improve the diagnosis of focal hepatic lesions. Gadoxetic acid (Gd-EOB-DTPA) and gadobenatedimeglumine (Gd-BOPTA) are the two most common gadolinium-based hepatobiliary agents having paramagnetic properties and are mainly administered intravenously; however, they differ with respect to doses and the duration of injection. The ability of these agents to provide delayed hepatobiliary phase imaging and dynamic imaging is anticipated to fuel segment growth in the market.

The Magnetic Resonance Imaging (MRI) segment dominated the market in 2019 and accounted for more than 51.8% of the revenue share. GBCA is used in nearly one out of three MRI scans, indicating the popularity of these agents in MRI procedures. MRI contrast agents are used for imaging of soft tissues for the detection of cancer. In addition, they are used for visualizing lesions during MRI scans for the detection of neurological disorders, aortoiliac occlusive diseases, and liver diseases.

The Magnetic Resonance Angiography (MRA) segment is expected to witness the highest CAGR in the market over the forecast period. This can be attributed to the advancements that have led to the development of GBCAs that can be used to enhance the characterization of atherosclerotic plaques. The use of GBCA in MRA enables high accuracy in the detection of severe carotid stenosis and possesses low-risk allergic reactions.

The neurology segment held almost 38.8% of the revenue share in 2019 in the market. This is owing to a higher preference for GBCAs in neurological treatments. Based on indication, the market is broadly divided into cardiovascular, neurology, cancer, and others (Musculoskeletal). Diagnostic evaluation of CNS for neurological disorders boosted the adoption of MRI contrast agents as they provide better images of neural structures than CT and are utilized for visualization of demyelinated, inflammatory, and neoplastic lesions. Gadavist, Dotarem, and Prohance are the most widely used macrocyclic GBCAs for the diagnosis of neurological disorders in the U.S. Out of the 9 GBCAs approved by the U.S. FDA for contrast-enhanced MRI, nearly 7 are approved specifically for contrast-enhanced MRI of the central nervous system. 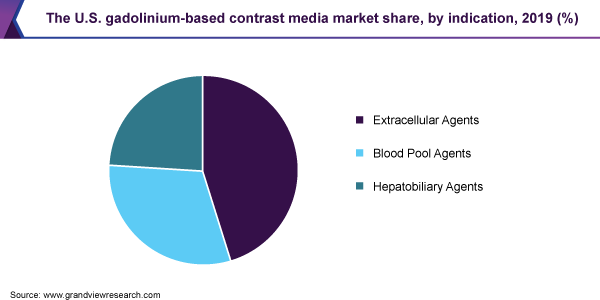 The cardiovascular segment is anticipated to register the fastest growth in the market over the forecast period. Cardiovascular MRI is increasingly being employed in the evaluation of complex congenital heart disease, ischemic heart disease, morphology study of vascular structure, and cardiac masses. The use of GBCAs enhances the MRA and MRI capabilities of cardiovascular imaging because of the availability of GBCAs with different pulse sequences, which enable manipulation of the inherent contrast of the blood and myocardium on the MRI. The use of GBCAs is anticipated to improve the specificity, sensitivity, and diagnostic yield of cardiovascular MRIs. Increasing regulatory approvals and technological advancements is expected to fuel segment growth in the market.

The market for Gadolinium-based contrast media is highly competitive due to the presence of a large number of domestic as well as international players. Companies are engaging in label expansions such as mergers, and acquisitions, to strengthen their product portfolio, provide competitive differentiation, and to expand geographically for attending a wider patient pool. For instance, in November 2019, The U.S. Food and Drug Administration (FDA) approved GE Healthcare’s Clariscan, a macrocyclic, ionic, gadolinium-based, MRI contrast agent, expanding the company’s portfolio for U.S. patients and radiologists. The product is used for MRI of the brain (intracranial), spine, and associated tissues in adult and pediatric patients. Furthermore, players in major markets are conducting randomized clinical trials to apply for label expansions through which they can cater to the unmet medical needs largely existing among patients with long-term diseases. Some of the prominent players in the U.S. gadolinium-based contrast media market include:

This report forecasts revenue growth at country levels and provides an analysis of the latest industry trends in each of the sub-segments from 2016 to 2027. For the purpose of this study, Grand View Research has segmented the U.S. gadolinium-based contrast media market report on the basis of type, modality, and indication:

How big is the U.S. gadolinium-based contrast media market?

What is the U.S. gadolinium-based contrast media market growth?

b. The Extracellular Agents segment held the largest market share in 2019, with a share of 45.31% in 2019. This can be attributed to these are the most commonly used agents in the imaging of tumor and inflammation, as well as in Magnetic Resonance Arthrography (MRA) as it improves the visibility of internal body structures.

Who are the key players in the U.S. gadolinium-based contrast media market?

What are the factors driving the U.S. gadolinium-based contrast media market?

b. Key factors that are driving the market growth include increasing prevalence of long term Chronic disease and complex comorbidity, technological advancements and label expansion by key players in the market.