The U.S. heavy movable bridges market size to be valued at USD 4,665.6 million by 2025 and is expected to grow at a compound annual growth rate (CAGR) of 13.0% during the forecast period. Increasing commercial uses of bridges for both road traffic and waterways traffic, coupled with the growing investments focused on infrastructure development, are anticipated to drive the market growth over the forecast period. 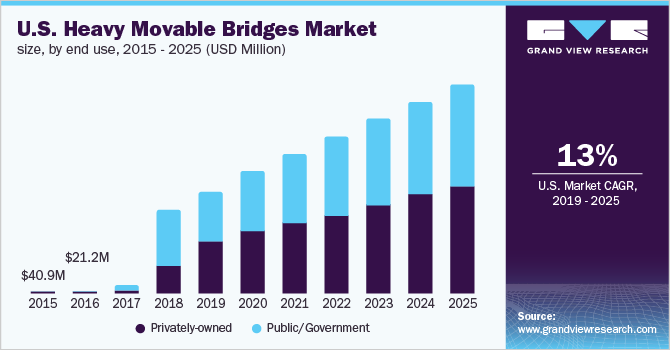 Rapid modernization, industrialization, and favorable government initiatives are anticipated to boost the demand for heavy movable bridges in the country. For instance, the local governments in various U.S. states, including Illinois, New Jersey, Texas, and New York, are carrying out initiatives to expand the country’s infrastructure network and related innovations. These states are also focusing on developing new bridges and upgrading existing ones to ease traffic congestion, streamline transportation services, and increase economic opportunities in the country.

Movable bridges are widely adopted for commercially vital waterways owing to the design of these bridges, which enables them to change their position to provide waterway for vessels and ships. Moreover, movable bridges are engineered in such a way that they help reduce infrastructure costs and prove to be beneficial for managing both road and water traffic.

Technological advancements in fields such as robotics, automation, data communications & networking, and instrument & measurement are anticipated to boost the development of movable bridges in the U.S. over the forecast period. Such technologies are expected to support and enhance the mechanical and physical potential of these bridges in terms of conception, design, construction, and operations.

On the other hand, various political and regulatory challenges are expected to impact the production and development of commercial bridges in the country. The key components of heavy movable bridges, including bridge sections, pilings, expansion joints, and guardrails, are made up of steel. Changing tariffs imposed by the U.S. government on materials such as steel, which are used for fabricating such components, are likely to hinder the market growth over the forecast period.

The increasing demand to create modern highways and river bridges for the safe movement of people, goods, and products is expected to stimulate the heavy moveable bridges market growth in the United States. Moreover, rapid urbanization has also positively impacted industry advancement.

In the United States, infrastructural advancements in the industrial sector have increased the necessity and demand for advanced bridge technologies. Increasing traffic management concerns have further propelled the market demand. Furthermore, movable bridges are widely utilized in regulating traffic flow in commercial waterways, as these bridges retract in order to make way for large container ships. These aforementioned factors are anticipated to contribute to the industry growth during the forecast period.

On the other hand, the changing raw material prices of steel and concrete are likely to limit the market growth. However, increased government initiatives such as investments and schemes to upgrade existing infrastructure, along with the construction of new facilities, are expected to create opportunities for the industry to grow in the region.

Bridge infrastructure is mostly owned by private companies, public organizations, or government departments. In 2018, the public/government segment witnessed significant growth in the market, accounting for over 65% of the overall market share. The growth of this segment can be attributed to various infrastructure investments planned by the U.S. government from 2018 to 2022. 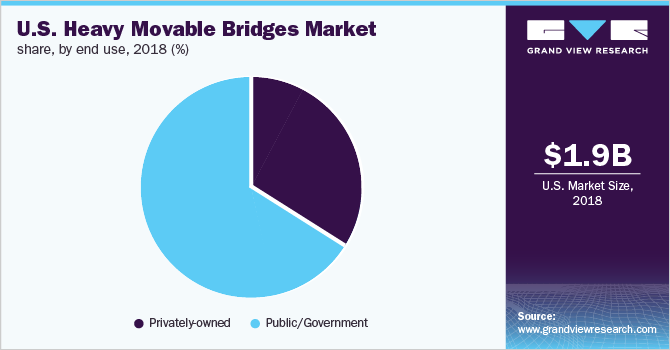 Consequently, several public-private partnerships have been formed due to the privatization of infrastructure in the country. These partnerships are focused on developing and upgrading flexible bridges for commercial purposes. Some of the key benefits of privatization with regard to public interest include incentivizing infrastructure improvement and innovation that scale up the competition among key market players in the country.

In 2018, the heavy movable bridges market in New York accounted for over 15% of the revenue share owing to significant investments focused on building and developing such infrastructure in the state. Several government policies and federal funding have been chalked out in the past few years to promote the commercial aspects of infrastructure development to foster waterfront businesses in the state.

Furthermore, with an increasing need for rehabilitation, repairs, and replacement of bridges, the state of Illinois is projected to witness substantial growth over the forecast period. The growing importance of improved transportation services coupled with an inclination of millennials toward travel & tourism has created a need for continuous infrastructure development among the local and federal governments. These factors are anticipated to drive the market growth over the forecast period.

The U.S. heavy movable bridges market is characterized by intense competition with the presence of a few predominant market players that own, operate, or maintain the bridge infrastructure across different states in the country. Some of the key players operating in the market include National Railroad Passenger Corporation and Subsidiaries (Amtrak), Burlington Northern Santa Fe, LLC (BNSF Railway Company), Canadian National Railway Company, Canadian Pacific, and CSX Corporation.

Companies such as Altra Industrial Motion Corp., AECOM, Champion Controls Inc., Eaton Corporation Plc., and Electro-Hydraulic Machinery Co. support several operating functions related to flexible bridges in the country. In order to gain a higher revenue share and strengthen their customer base, the majority of the companies are involved in mergers and acquisitions to improve their supply chain management.

In February 2022, BNSF Railway Company announced a capital investment of USD 3.55 billion. The focus of the investment is mainly on supporting and driving the company’s efficiency and growth plans

This report forecasts revenue growth at the country level and provides an analysis of the latest industry trends from 2015 to 2025 in each of the sub-segments. For the purpose of this study, Grand View Research has segmented the U.S. heavy movable bridges market report on the basis of end-use and state: 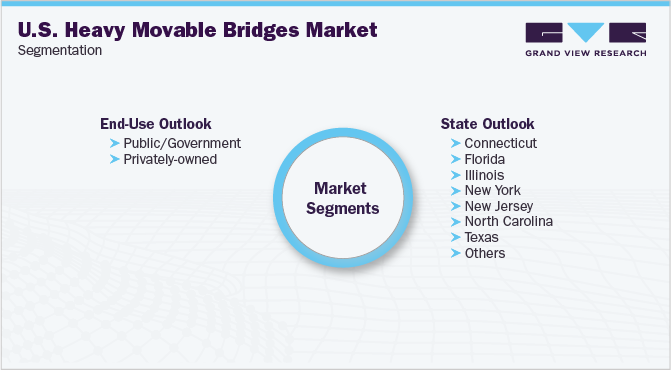