The U.S. knife sharpening service market size was valued at USD 70.9 million in 2020 and is expected to expand at a compound annual growth rate (CAGR) of 6.5% from 2021 to 2028. The growing popularity of cooking shows, such as Top Chef, MasterChef, Hell’s Kitchen, Iron Chef, and Chopped, has renewed interest in preparing meals at home, thereby driving the kitchen knives market. Furthermore, cooking as a prominent career choice is expected to drive the demand for kitchen knives in the near future. Consumers who purchase high-priced knives are the major seekers of sharpening services. A growing number of hotels, restaurants, cafes, lawn mower repair shops, sewing shops, wood shops, sheep shearers, cheese shops, and salons is also acting as a major factor for the growth of the market in the U.S. 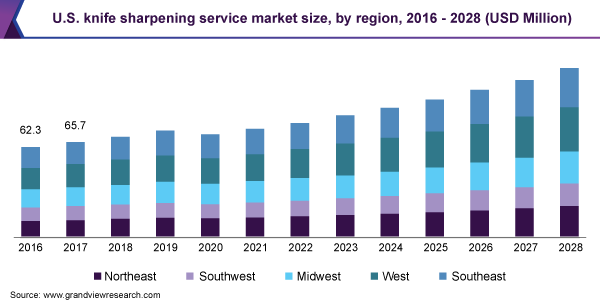 Consumers in the market are opting for award-winning service providers. Hence, companies are focusing on gaining reviews and awards. For instance, Carter Cutlery’s founder Murray Carter was recognized as one of Portland’s Master Bladesmith by the Portland Monthly Magazine in the March 2018 issue. In February 2018, Engearment.com reviewed Murray’s Perfect Neck Knife Carter Cutlery. According to the reviewer, Carter neck knives are EDC cutlery perfection.

In 2015, Rod’s Sharpening Service won second place in a nationally recognized sharpening contest i.e. Sharpeners Report contest in Hickory, North Carolina, the U.S. These recent developments and strategic initiatives have had a positive impact on the market growth. According to the Leading Indicator of Remodeling Activity (LIRA), home improvement spending has risen 6% annually in the last three years since 2015. In addition, owners spent an additional average of USD 2000 on home remodeling projects in 2016 compared to 2015. This scenario is projected to increase the adoption of smart home appliances.

The global outbreak of COVID-19 has significantly impacted knife sharpening service providers. Although with more people cooking at home instead of eating out, the demand for knife sharpening services among households is likely to be stable or increase. On a commercial level, the demand for this service has been severely hampered. This can be attributed to the lockdown directives issued by the government. Moreover, with restaurants, hotels, and other eateries either shut or working on reduced operations, the usage of knives has also reduced significantly. This has resulted in less requirement for sharpening services.

Currently, knife sharpening services are taking longer to deliver orders, particularly in states that have stay-at-home advisories and mandatory closure of nonessential businesses. In addition, the market has been witnessing supply chain disruptions. Fewer people working in order to contain the risk of spreading the virus results in delayed pick-up and delivery from and to the customers. Moreover, an increasing number of consumers are opting to sharpen their knives at home, equipped with tools bought online and instructions and videos found on the internet. This factor is also estimated to hamper the market growth over the forecast period.

The household segment dominated the market with a share of nearly 55.0% in 2020. This is attributed to the increasing urbanization as a result of population growth and migration. It is imperative to keep kitchen knives sharp so that they easily cut through food with minimum slippage. Dull knives are unsafe in home kitchens because a dull blade requires more force to do the cutting and so has a higher chance of slipping and missing the mark. Moreover, poorly and unevenly chopped vegetables and meats do not cook properly or evenly. Therefore, it is important for household kitchen knives to be periodically sharpened as they improve the overall cooking experience. 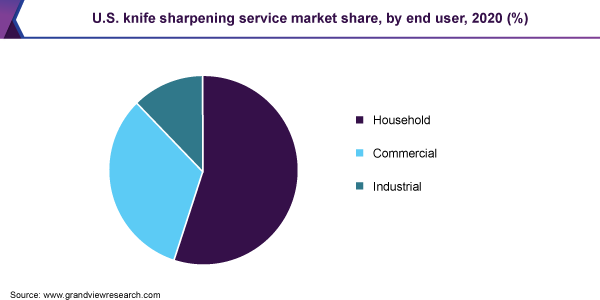 The commercial segment is expected to witness the fastest growth over the forecast period. The rapid expansion of commercial spaces, like hotels, resorts, and large food joints, is propelling the demand for kitchen tools, such as knives, which is likely to bode well for the commercial segment over the forecast period. The growing trend of food away from home has been presenting lucrative growth opportunities for restaurants and eating joints, which subsequently drives the demand for knives and knife sharpening services in the commercial segment. According to a 2019 report by the National Restaurant Association, there were more than 1 million restaurants in the U.S. in 2019 and the number is expected to grow in the coming years.

The western region of the U.S. dominated the market with a share of 25.5% in 2020. This is attributed to the continuous growth of the housing market in the U.S. Most first-time homebuyers in the region and throughout the U.S. prefer staying in rented houses. As house prices are skyrocketing, the rented housing market is witnessing considerable growth, giving rise to increased spending on household renovations, repairs, and upgradations. Several consumers consider opting for sharpening services for kitchen tools, such as knives, multiple times a year rather than buying new ones. This, in turn, is expected to drive the demand for knife sharpening services in the Western region of the U.S.

Furthermore, increasing travel to the West Coast, mainly in the Hawaiian region, has boosted the growth of the travel and tourism sector and subsequently attracted new chains of restaurants and hotel establishments in the region. This has created a positive scenario for the growth of the restaurants and hotel industry in the region, which, in turn, drives the demand for kitchen tools, such as kitchen knives, as well as knife sharpening services.

The market is characterized by the presence of several established players. These players account for a considerable market share and have a strong presence across the U.S. The market also comprises small to midsized players, which offer selected sharpening services and mostly serve local customers. The impact of established players on the market is quite high as a majority of them have vast networks across the U.S. to reach out to their large customer base. Key players operating in the market are focusing on offering excellent sharpening services and experiences in order to boost revenue growth and reinforce their position in the market. Some prominent players in the U.S. knife sharpening service market include:

This report forecasts revenue growth at the country level and provides an analysis of the latest industry trends and opportunities in each of the sub-segments from 2016 to 2028. For the purpose of this study, Grand View Research has segmented the U.S. knife sharpening service market report on the basis of end user and region:

How big is the U.S. knife sharpening service market?

What is the U.S. knife sharpening service market growth?

b. West region dominated the U.S. knife sharpening service market with a share of 25% in 2019. This is attributable to the continuous growth of the housing sector in this region.

Who are the key players in the U.S. knife sharpening service market?

What are the factors driving the U.S. knife sharpening service market?

b. Key factors that are driving the U.S. knife sharpening service market growth include the growing popularity of cooking shows such as Top Chef, MasterChef, Hellâ€™s Kitchen, Iron Chef, and Chopped has renewed interest in preparing meals at home and a growing number of hotels, restaurants, cafes, lawn mower repair shops, sewing shops, wood shops, sheep shearers, cheese shops, and salons, among others.