The U.S. and Mexico metal stamping market size was valued at USD 51.6 billion in 2021 and is expected to expand at a compound annual growth rate (CAGR) of 4.4% from 2022 to 2030. Growing demand from various industries such as Electric Vehicles (EVs), industrial machinery, and consumer appliances are the key growth drivers for the market. Consumer appliances are witnessing growth owing to rapid technological advancements. Rising preference towards precise metal components in the industry is benefitting metal stamping demand. Factors such as growing demand for smartphones, artificial intelligence, reducing prices of electronics, and replacement cycles are expected to augment the growth of the consumer appliances industry, and thus, drive demand for metal stamping across the forecast period. 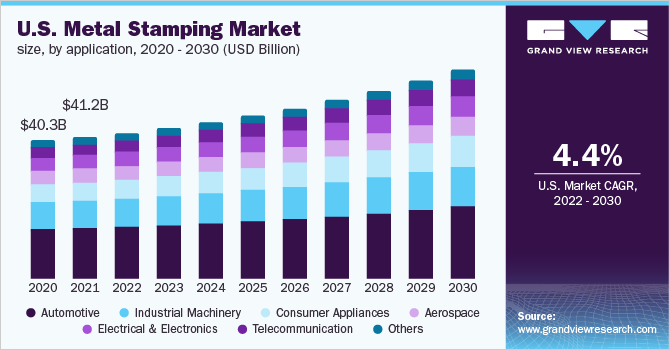 The U.S. is among the leading consumers of metal stamping. Its growth in the consumer appliances industry is anticipated to propel at a faster rate owing to the rising demand for smartphones. The U.S. is one of the largest consumers of mobile phones in the world with more than 290 million active users, as of 2021. The growing adoption of EVs in the U.S. is projected to further drive the metal stamping market across the forecast period. Sales of EVs surged in the country and automotive industry giants are planning to begin manufacturing to cater to the rising demand. For instance, in November 2021, Hyundai Motor Group announced its plan to begin the manufacturing of Genesis GV70 EVs in the U.S. by 2022.

Growing demand for home appliances is further anticipated to propel metal stamping demand in the country. For instance, according to the United States Census Bureau, sales of household appliance stores increased by more than 7% from 2020 to 2021. The total sales in 2020 were USD 18,330.0 million whereas the sales were USD 19,757.0 from January to November 2021. Furthermore, investments in automation and robotics are anticipated to positively influence the market. For instance, in October 2020, Volkswagen’s passenger and commercial cars divisions ordered over 2,200 new robots for producing EVs at plants in the U.S.

Based on application, the automotive segment accounted for a revenue share of more than 39.0% in 2021. The metal stamping process is used to manufacture numerous automotive parts including body panels, tops, chassis, hubcaps, moldings, trim pieces, brake components, and interior and exterior lighting components. Rising emphasis on lowering vehicle weight is anticipated to augment the demand for metal stamped parts in the automotive industry over the coming years. Furthermore, industrial machinery constitutes an integral part of the market. Metal stamping is used for producing numerous products such as brackets, electrical housings, and interior components, which find application in industrial machinery.

The manufacturing industry is adopting various automated and smart industrial solutions, which is further expected to propel segment growth. The consumer appliances segment is expected to emerge as the fastest-growing application segment of the market for metal stamping in the U.S. and Mexico. This growth is on account of increasing utilization of lightweight metal components to improve the durability of appliances. Metal stampings are extensively used in various applications in the industry, such as dishwashers, dryers, garbage disposal units, grills, HVAC units, ovens, and refrigerators.

Based on process, the blanking segment accounted for the largest revenue share of more than 27.0% in 2021 and this trend is expected to continue over the forecast period. The segment has been dominating the market for many years owing to its cost-effective and quick ways to produce identical parts in large volumes. These advantages made blanking a preferred choice in end-use industries such as aerospace, automotive, and household appliances where mass production takes place. Embossing is the second-most vital process segment of the market. Embossing in automotive metal stamping is expected to witness high growth owing to the large-scale manufacturing of automotive components. 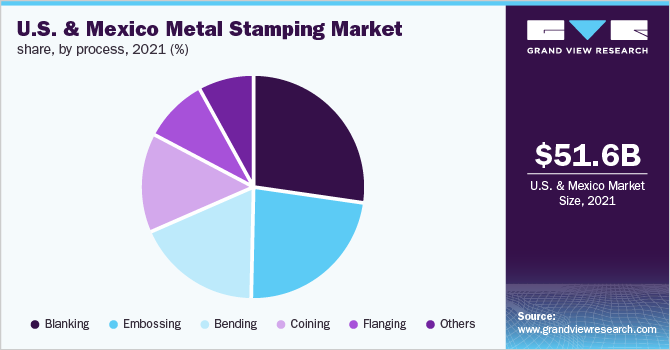 The use of laser embossing for engraving patterns and dates on automotive components and license plates is expected to augment the segment growth over the forecast period. The coining segment is anticipated to register a CAGR of 4.3% in terms of revenue over the forecast period. This technique is used in the manufacturing of precision parts that require finer polished surface finishes. The coining market is expected to witness growth owing to the increasing complexity in vehicle designs. The process provides accurate bends in a consistent manner, does not require expensive machinery or hardened surfaces, and can resist impact and abrasion.

The U.S. held a revenue share of 80.0% in 2021 of the U.S. and Mexico metal stamping market. The growing application of metal stamping in automotive and electrical and electronics industries has compelled manufacturers to expand their facilities in the country. For instance, in November 2021, General Motors announced plans to invest more than USD 46.0 million at its metal stamping facility at Parma, Ohio, U.S. In Mexico, the market is anticipated to register a growth rate of 4.6 % in terms of revenue, over the forecast period.

Government packages and incentives are projected to boost the construction sector of Mexico, thereby, positively influencing the growth of the metal stamping market. For instance, in 2019, the finance minister of Mexico announced a package of USD 42.5 million to promote infrastructural developments and boost private consumption.  Increasing FDI in Mexico through U.S. is another growth driver for the market. According to the U.S. Bureau of Economic Analysis, U.S. FDI in Mexico was USD 100.9 million in 2019. It is the top FDI source for Mexico. Also, Mexico’s approval of the USMCA protocol in December 2019 further boosted confidence in investors.

The market is highly competitive with the presence of numerous players. Joint ventures, capacity expansions, and investments in new technologies are the key strategies adopted by many key players in the market. Many key players are ramping up their facilities to cater to the needs of EV manufacturers. For instance, in May 2021, General Motors decided to invest USD 40 million for the renovation and installation of new flexible fabrication machinery presses at its Pontiac stamping plant. This investment is to support EV production in the future. Pontiac Metal Center has been a supplier to the GM assembly plant, which is involved in the building of the Chevrolet Bolt EV. Some of the prominent players in the U.S. and Mexico metal stamping market include:

This report forecasts revenue growth at country level and provides an analysis of the latest industry trends in each of the sub-segments from 2017 to 2030. For the purpose of this study, Grand View Research has segmented the U.S. and Mexico metal stamping market report on the basis of process, application, and region:

How big is the U.S. and Mexico metal stamping market?

What is the U.S. and Mexico metal stamping market growth?

Which segment accounted for the largest share of U.S. and Mexico metal stamping market?

b. Based on application, automotive accounted for largest share of more than 39.0% in 2021 of the overall market as it is used to manufacture numerous automotive parts including body panels and tops, chassis, hubcaps, moldings, trim pieces, engine and transmission components, brake components, and interior & exterior lighting components.

Who are the key players in the U.S. and Mexico metal stamping market?

What are the key factors driving the U.S. and Mexico metal stamping market?

b. Growing demand from various industries such as electric vehicles, industrial machinery, and consumer appliances are the key growth drivers for the metal stamping market in the U.S. and Mexico.