The U.S. PC wire and strand market size was valued at USD 228.8 million in 2019 and is estimated to witness a CAGR of 4.6% from 2020 to 2025. The growth is largely supported by the rising construction activities and popularity of prefab or offsite construction in the country. 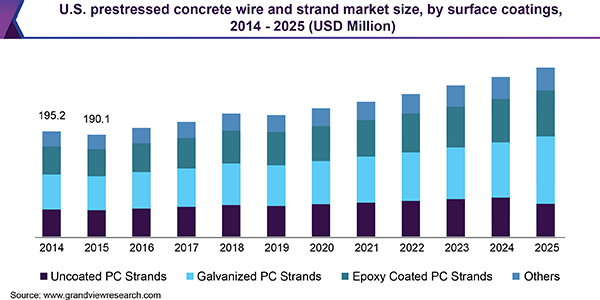 Prefab construction involves molding of a structure in a controlled environment, followed by the process of curing. The finished product is then transported to the construction site for erection. Prestressed Concrete (PC) wires and strands are used to provide strength to concrete structures as well as to the prefab structures.

Construction spending in U.S. is anticipated to ascend at a significant rate over the forecast period. According to Oxford Economics, the volume of global construction output is predicted to grow by 85% and reach USD 17.5 trillion by 2030 with U.S., China, and India being the major economies boosting the growth. They are expected to account for 57% of the global growth until 2030. Such positive outlook is projected to provide a suitable platform for the prestressed concrete (PC) wire and strand market growth.

The growth of construction industry is anticipated to propel the demand for prestressed concrete (PC) wire and strand. Further, the positive outlook of upcoming projects in the U.S. construction industry and favorable government policies for infrastructure is expected to provide a lucrative opportunity market players. For instance, in August 2021, the U.S. government announced infrastructure bill of USD 1 trillion. The investment from this bill is likely to support the construction of bridges, roads, water infrastructure, and high speed internet among others.

The uncoated segment of the market is likely to witness a stagnant growth over the coming years. China is the largest exporter of steel-related products such as PC wires & strands and steel ropes & cables to the U.S. Any fluctuation in the market in China has an effect on the dynamics of the U.S. steel market and its related products. However, the recent imposition of import tariffs by the U.S. government is likely to reduce the impact of China on the U.S. steel market.

Galvanized was the largest segment in 2018 with a revenue share in 2018. This segment is anticipated to maintain its dominance over the forecast period. Galvanized PC wire and strand is coated in zinc before stranding, which makes it significantly resistant to corrosion. Proliferation in the development of multiple high-rise buildings and commercial buildings is the key factor for the dominance of this segment in U.S.

In terms of volume, epoxy coated is expected to expand at a CAGR of 3.6% over the forecast period. Epoxy coated PC strand have perfect anti-corrosion performance and high fatigue resistance capability. Epoxy coated PC wire and strand is an ideal choice as a cost-effective and corrosion-resistant reinforcing solution for pretensioned concrete applications that are exposed to deicing salts or marine water conditions such as road deck panels and girders, and piling.

The uncoated segment is likely to observe slow growth as compared to its counter parts. The use of this product is largely concentrated for the inner application in precast structures. To avoid corrosion or rusting, this product is kept at minimum exposure to air.

Buildings led the U.S. PC wire & strand market, and accounted for 41.6% of the revenue share in 2018. Significant investment in residential and commercial buildings was the major factor for its dominance. According to the U.S. Census Bureau, the residential spending was valued at USD 366,660 million in 2008 and registered a CAGR of 7.9% to reach USD 546,173 million in 2018. 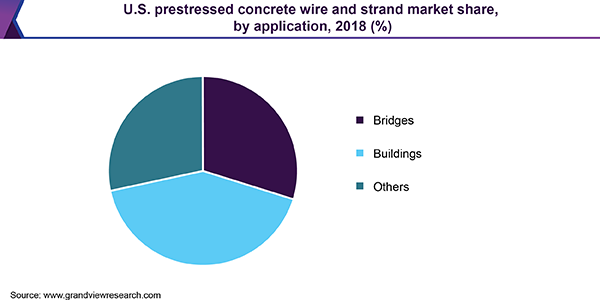 In terms of volume, utilization of PC strand and wire in bridges is predicted to ascend at a CAGR of 2.9% over the forecast period. The segment is expected to witness steady growth over the forecast period owing to the increasing prominence of PC wires and strands for the restoration of bridges. According to infrastructure report card from the American society of Civil Engineers (ASCE) in 2017, U.S. had 614,387 bridges and roughly 9.1% of the nation’s bridges were found structurally deficient in 2016.

In addition, construction boom in states such as Nevada is also expected to foster the market growth in the region. For instance, the massive projects in the pipeline in Nevada such as the Las Vegas stadium or Resorts World Las Vegas on the Strip are expected to provide lucrative opportunities for PC strand and wire market in the region. Moreover, the Nevada Department of Correction has identified 225 projects, most of them consisting of maintenance and restoration projects and costing an estimated USD 486.6 million.

In southwestern U.S states such as Arizona, rising construction of commercial buildings is the major factor driving the growth of PC wire and strand market in the region. Arizona is the second fastest growing state, in terms of real GDP growth. In addition, Arizona and Texas are among the states with very high population growth rate. As a result, there is significant demand for residential buildings, which is expected to drive the PC strand and wire market in the region.

New York City and Boston are some of the largest markets in the Southeast U.S. However, these cities have witnessed a slowdown in the construction sector since the last few years. Multi-family buildings have witnessed a slow-down in recent past. However good growth is to be expected in industrial buildings and high-rise towers, which is estimated to be the primary factor supporting the PC strand and wire market growth in the region.

Insteel; Sumiden Wire Products Corporation; Keystone Consolidated Industries, Inc. (Strand Tech Manufacturing); and Wire Mesh Corporation (WMC) are some of the key regional players. Insteel has emerged to be the leader among the regional players. Direct sales are the popular sales channel among the domestic producers.

Major industry players are implementing the growth-through-acquisition strategy to increase their regional presence. For instance, some key mergers of PC wire and strand industry include the advanced cord manufacturing agreement between Bekaert and Ontario Teachers’ as well as the takeover of American Spring Wire’s wire and strand segment by Insteel Industries in 2015 and 2014 respectively.

This report forecasts revenue and volume growth at country and regional levels and provides an analysis of the latest industry trends in each of the sub-segments from 2014 to 2025. For the purpose of this study, Grand View Research has segmented the U.S. PC wire & strand market report on the basis of surface coatings, application, and region:

How big is the U.S. pc wire and strand market?

What is the U.S. pc wire and strand market growth?

Which segment accounted for the largest U.S. pc wire and strand market share?

b. The galvanized segment dominated the U.S. PC wire and strand market with a share of 34.6% in 2019. This can be attributed to the proliferation in the development of multiple high-rise buildings and commercial buildings.

Who are the key players in U.S. pc wire and strand market?

What are the factors driving the U.S. pc wire and strand market?

b. Key factors driving the U.S. PC wire and strand market growth include the rising construction activities and popularity of prefab or offsite construction in the country.