The U.S. tobacco market size was valued at USD 75.9 billion in 2021 and is expected to expand at a compound annual growth rate (CAGR) of 3.4% from 2022 to 2030. As a result of changing consumer preferences, several manufacturers are marketing many novel products like cigars and cigarillos and next-generation products to expand their profit margin. In the U.S., people living below the poverty line and having lower levels of educational attainment have higher rates of cigarette smoking when compared to the rest of the population. 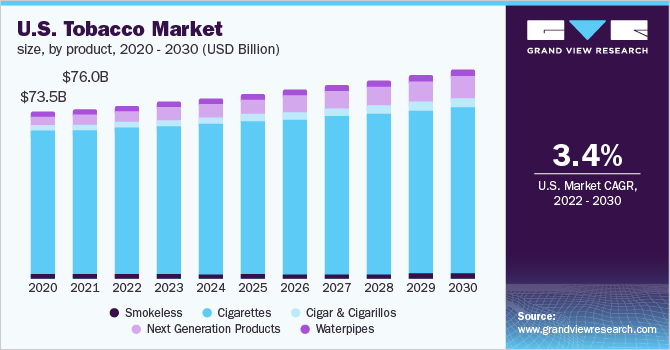 The COVID-19 pandemic has pushed the market to continue to look for ways to reduce supply chain complexity responsibly. The pandemic led to risks and uncertainties related to possible delays in shipments of tobacco products across the nation, including closure or restricted activities at ports or other channels. The pandemic also caused disruptions in the operation of the supply chain and customers due to restrictions in the movement of employees and customers. However, the impact of COVID-19 yielded innovative changes that enabled the business to be more flexible and accelerate certain activities in the crop cycle for the future.

Increased cultivation of tobacco for consumption as well as for exports is expected to contribute to the growth of the regional market. In 2020, Philip Morris International Inc; Japan Tobacco Inc (JT); Imperial Brands Plc; and Altria Group Inc. all raised their sales or profit targets, since the industry performed better than expected, primarily in the U.S. Similarly, in December 2020, Liggett was the fourth-largest manufacturer of cigarettes in the U.S. in terms of unit sales pursuant to the growing demand for cigarettes.

It is worth mentioning that while the overall consumption of tobacco seemed to reduce in the past years, the demand for these products gained momentum during the pandemic. The industry volumes outperformed recent historical trends and benefited from increased consumer demand related to changes in underlying cigarette purchasing consumption patterns associated with the pandemic. According to the figures published by the Campaign for Tobacco-Free Kid, in December 2021, currently, 23.6% of high school students are tobacco users, 5.4% are cigar smokers, 11.3% are e-cigarette smokers, and 34.1 million adults are current smokers only in the U.S. These figures are likely to create a significant impact on the market growth.

Along similar lines, in November 2020, the American Lung Association reported that tobacco sales had increased as former smokers who had previously quit smoking may have resumed during the pandemic. It stated that stress could be a primary driver of relapses. Moreover, The WHO predicts the growing use of cigarettes, water pipes, cigars, pipes, smokeless products, and heated tobacco products among adults. This is expected to positively influence the growth of the U.S. tobacco market in the times to come.

Companies have been developing new products to keep up with changing demands of the millennials and generation Z. For instance, in May 2019, Philip Morris launched IQOS. This electronic device heats paper-wrapped tobacco-filled sticks and as a result, generates nicotine-containing aerosol. The product has been launched as an alternative to cigarettes. The advertising of tobacco-based products carries a political influence on kids as they are three times more sensitive to advertising than adults and are more likely to be influenced to smoke by cigarette marketing than by peer pressure. On average, the tobacco industry annually spends USD 8.4 billion i.e. USD 23.0 million each day on the marketing of its products nationwide.

The cigarette segment held the largest market share of over 85.0% in 2021 and is expected to maintain dominance during the forecast period. The U.S. market consists of premium cigarettes, generally marketed under well-recognized brand names at higher retail prices to adult smokers who carry a strong preference for branded products. The cigarette companies also sell at discounted rates to smokers who are relatively more value-conscious.

However, the segment is expected to expand at a lower CAGR of 2.5% owing to changes in underlying cigarette purchasing patterns. The industry-wide shipments of cigarettes in the U.S. will continue to remain moderate as a result of numerous factors including health considerations, diminishing social acceptance of smoking, and a wide variety of federal, state & local laws limiting smoking in public places.

The next-generation products segment is anticipated to expand at a CAGR of over 10.0% owing to increased initiation among youth and young adults, as well as assisting adult smokers to switch to potentially less harmful forms of tobacco consumption, which is driving the demand for next-generation products. The growing availability of next-gen products such as e-cigarettes and heated tobacco in various flavors like menthol, & clove will influence the young population to try tobacco products further helping adult cigarette smokers reduce the use of cigarettes and switch to potentially less harmful products. Market players are investing, developing, and introducing various newer products to reduce the risk associated with the consumption of tobacco further driving the regional product demand.

The offline channel accounted for a revenue share of over 85.0% of the market and is slated to remain the primary source for purchasing tobacco products in the U.S. Both small and large-scale companies sell their products through offline retail channels due to a large consumer base such as in grocery stores. Accordingly, compliance with the requirements of the PACT Act, which imposes stringent rules on online sellers, may significantly increase the costs of online tobacco businesses, increasing the prices of online products and making them less attractive to consumers as compared to products sold at local offline retailers. 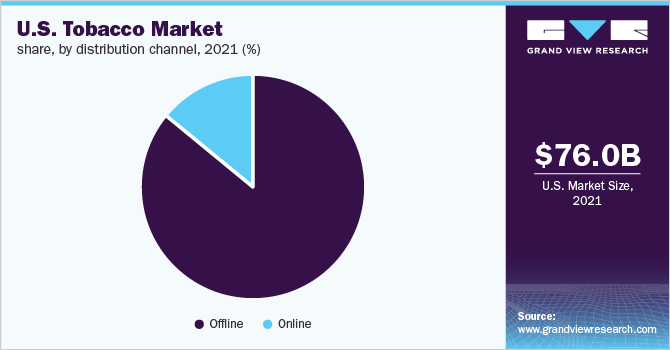 The online channel is expected to register the fastest CAGR of around 4.7% from 2022 to 2030. Spending on advertising and promotion by leading players operating in the market is expected to offer significant growth to the segment in the forthcoming years. Growing online availability of flavored e-cigarettes like menthol and fruit is expected to boost the segment growth. Owing to the growing use of the internet in the U.S., consumers place orders of items such as tobacco products in some locations through the online website or app and, get the items delivered to their doorstep. This has encouraged the consumers to place through online portals.

The southeast U.S. has emerged as a profitable revenue pocket for tobacco in the region, accounting for 29.3% of the total market share in 2021. Cities such as Kentucky followed by West have led the total percentage of adults who still smoke cigarettes, according to state-by-state figures released by the CDC. Moreover, Kentucky is regarded as the most tobacco-dependent state in the U.S. The products including smokeless, snuff, chewing, and pipes are most commonly consumed in the U.S.In recent years, there has been an increase in the popularity of e-cigarettes, especially among adults across the state, which has steered the consumption of tobacco products across the region.

Northeast U.S. has also emerged as the fastest-growing segment over time and is expected to witness a CAGR of 5.0% from 2022 to 2030. The market is expected to witness considerable growth in the region as the percentage of adults who smoke is moderate. According to a report by CDC, in 2019, the percentage of adults who reported the current use of smokeless products stood at 1.1% when compared to people living in the Northeastern part of the country.

There is an increase in the number of adults using a broader range of tobacco products other than cigarettes, this has driven the momentum of tobacco use in the state. According to America’s Health Ranking, in 2021, the participation of U.S. citizens aged 18 and above increased from 45.8% to 57.1% between 2014-2016 and 2018-2020.

The market is characterized by the presence of a few well-established players and several small and medium players. Mergers, acquisitions, and product launches remain some of the key strategic initiatives in the industry to gain a competitive edge. For instance:

Some prominent players operating in the U.S. tobacco market include:

This report forecasts revenue growth at the country level and provides an analysis of the latest industry trends and opportunities in each of the sub-segments from 2017 to 2030. For this study, Grand View Research has segmented the U.S. tobacco market report based on product, distribution channel, and region:

How big is the U.S. tobacco market?

What is the U.S. tobacco market growth?

Which segment accounted for the largest U.S. tobacco market share?

b. The cigarette segment held the largest market share of 86.2% in 2021. This is attributed to wide product availability and consumer preference for cigarettes.

Who are the key players in the U.S. tobacco market?

What are the factors driving the U.S. tobacco market?

b. Key factors that are driving the U.S. tobacco market growth include factors such as stress, anxiety, and boredom that are driving up the use of tobacco products and other related substances.