The global varicose veins treatment devices market size was valued at around USD 1.1 billion in 2018 and is expected to expand at a CAGR of 6.3% over the forecast period. Increasing demand for minimally invasive procedures to treat varicose veins, along with growing investments by the market players to develop innovative and effective products is likely to boost the growth.

Varicose veins can be aesthetically displeasing. They become problematic only in case they cause pain, aching, swelling, and considerable discomfort. In severe cases, they may rupture and can lead to ulcers. Available options for the treatment of this condition have evolved over the last few years. Majority of the private healthcare providers are offering improved minimally invasive techniques. 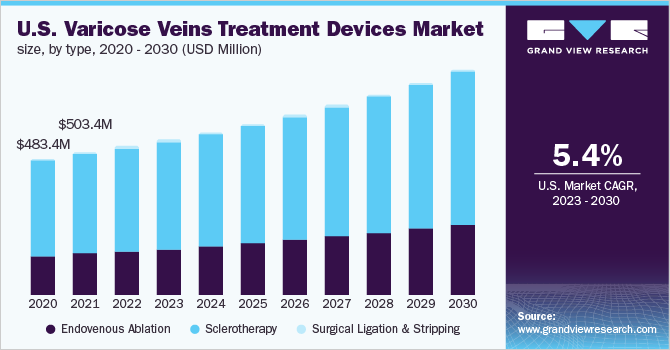 Elderly population is more prone to the development of varicose veins. Effect of aging on the structure and functions of the veins is found to be considerable. Over the age of 50, one out of every two people is affected by varicose vein. Overweight people and pregnant women are also susceptible to developing this condition. Some of the treatments available in the market include sclerotherapy, laser therapy, and radiofrequency ablation. Of these, sclerotherapy is preferred as a first-line of treatment for varicose, spider, and reticular veins.

Varicose veins surgical procedures are likely to undergo significant changes in near future. Surgery has been largely replaced by noninvasive options. Due to the risk of infections associated with invasive surgeries, preference for noninvasive surgeries has increased in recent years. This factor is projected to drive the varicose veins treatment devices market during the forecast period.

Sclerotherapy is a noninvasive technique which involves injecting a foam sclerosant in the veins. It is less painful as it does not involves cutting of veins. The recovery of patients is faster as it does not require hospital admission. Moreover, in U.S., Medicare provides coverage to the patients undergoing sclerotherapy treatment. In 2016, more than 375,000 sclerotherapy procedures were conducted in the U.S. Insurance coverage can increase the adoption of sclerotherapy in the forthcoming years.

Sclerotherapy segment accounted for the largest market share in 2018 due to various advantages of this treatment including less bruising and scarring; no need for sedation; no need for prolonged hospital stay, simple follow-up treatments, and positive reimbursement policies. The usage of foam Sodium Tetradecyl Sulfate (STS) in sclerotherapy has innovated the treatment and provides long-term success. 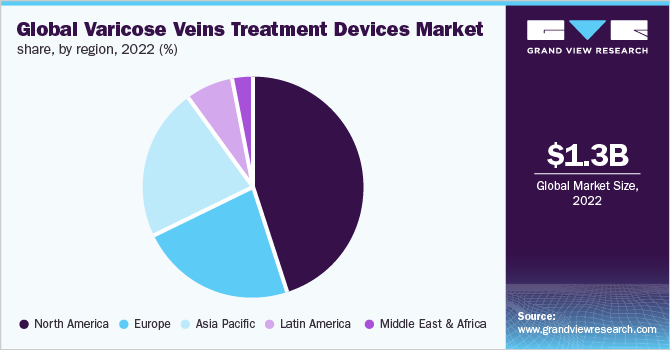 Various organizations such as the British Association of Sclerotherapies (BAS) undertake initiatives annually for raising awareness and encouraging adoption of various treatments. Increasing number of approvals is also contributing to the market growth. In February 2015, the Food and Drug Administration (FDA) reviewed data for the premarket approval of the VenaSeal system. The FDA approval for VenaSeal system included from analysis of results from three clinical studies. Medtronic announced that new CPT codes may aid in getting positive coverage for its VenaSeal closure device from the public and private insurers in U.S. in November 2017.

The endovenous ablation segment is likely to witness the fastest growth over the forecast period. The endovenous ablation procedure is preferred over the conventional procedures such as surgical stripping and ligation, as the procedure is minimally invasive and is associated with lesser complications. Moreover, various market players are focusing on the development of efficient and technologically advanced products which is likely to boost the market growth.

North America led the market in terms of revenue share in 2018 as it has a large population base, which is aesthetically conscious. People are willing to undergo cosmetic procedures owing to the evident results and safety. North America is an early adopter of technology and the demonstration of safety and efficacy of laser treatments has helped reduce the stigma attached to cosmetic procedures and has helped gain social acceptance for laser procedures, especially by men.

Introduction of advanced technology is also boosting the growth of the market for varicose vein treatment devices. In May 2016, Navarro opened a vein center in U.S. with a vision to educate the community about chronic venous insufficiency and varicose veins and the proper treatment for this condition. About 30 million Americans suffer from varicose vein each year and less than 10% of the population seeks treatment.

In U.S., the Society for Vascular Surgery has created clinical care guidelines along with the American Venous Forum for the treatment of varicose veins. These guidelines offer recommendations for management of chronic venous diseases, based on the grade system. Grading of the severity of the condition helps care and insurance providers communicate with one another. For instance, while referring patients to vein specialists, a general physician can effectively communicate the severity. Patients can be classified into different groups based on the severity.

Asia Pacific is expected to be the fastest-growing segment in the forthcoming years due to the presence of a large elderly population, increasing disposable income, and rising awareness about these procedures. The market is highly diverse due to varying regulatory factors, which result in the difference in availability of products in different countries.

For instance, Medtronic developed VenaSeal Closure System and received the U.S. FDA approval in February 2015 and insurance coverage in 2017. Hence, the development of innovative products, commercialization, and availability of reimbursements for the product are some of the major strategies adopted by the market players to maintain their dominance.

In February 2017, Teleflex acquired Vascular Solutions, Inc. for about USD 1 billion. This acquisition was expected to boost the vascular and interventional access product portfolios of the former through additional revenue associated with the peripheral and coronary vascular market of Vascular Solutions.

Furthermore, one of the key strategies implemented by some of the market players is to purchase products directly from their respective manufacturers as sell them as a distributor. For instance, AngioDynamics, Inc. purchased Sotradecol from Bioniche Pharma Group Limited in 2006 and Asclera from Merz in March 2016.

In March 2018, Medtronic launched an Investigation Device Exemption (IDE) study to determine the effectiveness and safety of the Abre venous self-expanding stent system to be used in the treatment of deep venous diseases. Around 200 subjects are likely to be enrolled in this study across 35 locations throughout U.S. and Europe.

This report forecasts revenue growth at global, regional, and country levels and provides an analysis of the latest industry trends in each of the sub-segments from 2014 to 2025. For the purpose of this study, Grand View Research has segmented the global varicose veins treatment devices market report based on type and region: