The global vegan baking ingredients market size was valued at USD 1.1 billion in 2018 and is expected to grow at a compound annual growth rate (CAGR) of 5.6% from 2019 to 2025. The growth of the market is attributed to an increase in the number of people adapting to veganism, a rise in demand for vegan baking ingredients, and continuous research and development in this market. 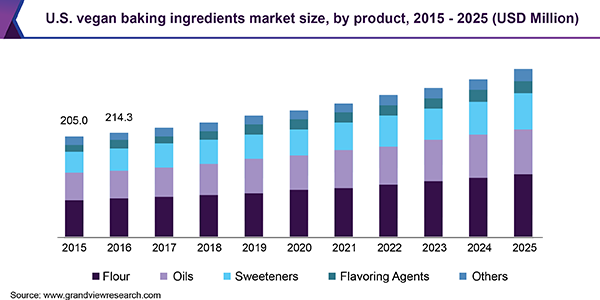 Moreover, a rise in the number of vegan outlets and expansion in these products offered by the food chains are expected to drive the market. For instance, Germany has many vegan restaurants in its capital Berlin, Lucky Leek being one of them that serves vegan-based pancakes and burgers.

The market for vegan food products has been facing severe competition, resulting in an expansion in the product offering. For instance, in South Korea, a Starbucks outlet expanded its vegan products range by adding vegan focaccia bread in its menu, thereby generating the market demand. Due to the rise in competition in this market, the food manufacturers are coming up with new products and expanding their distribution facilities to cater to the increasing consumer demand.

For instance, in 2018, Bakels opened up a new distribution center in Bicester with an 80,000 square foot facility, dedicated to the storage of finished goods to cater to the increasing demand for these ingredients. Moreover, online retail stores are focusing on adding multiple vegans based bread items to tap the surging demand as well as capitalize on the increasing demand with few stores that are launching self-manufactured such products. For instance, Waitrose & Partners, a British supermarket chain, has been assigning specific sections for vegan products, thereby providing an expansive distribution network.

An increase in health awareness across the globe and a rise in demand for this category are further propelling the demand for the market. Consumption of products made from these ingredients reduces the risk of chronic health diseases such as diabetes, certain cancer, and heart diseases. For instance, consumption of bread has reduced in recent years due to the health problems associated with it, thereby driving the need for gluten-free and healthy alternatives.

Europe held the largest share in the vegan baking ingredients market. In 2018, approximately 11,000 tons of vegan baking ingredients were sold for the production of bread in the U.K. Europe has the largest bakery products consuming population and the region is also taking initiatives to improve the standard of food products by continuous research in the field of vegan ingredients. In the U.K., Artisan Bread Organic launched a vegan burger with 100% organic products.

The market is segmented by product into flour, oils, sweeteners, flavoring agents, and others. Flour held the largest share of 37.5% in 2018 and is expected to witness the fastest growth in the coming years owing to its wide range of applications in the bakery products such as cookies, cakes, bread, and biscuits. It has a medium protein content of 9% to 12%, which makes it inelastic and suitable for cookies and cakes. Gluten-Free is a leading manufacturer of vegan flour and bakery mixes such as muffin mix and bread and roll mix.

Flour is gaining popularity due to product innovations by the companies. The companies are coming up with different varieties of vegan flour such as almond flour, buckwheat flour, sorghum flour, and teff flour. For instance, Blue Diamond Almonds and Bob’s Red Mill Natural Foods are the two leading companies that manufacture almond flour. These flours also have other benefits like gluten-free, rich vitamins and minerals, and antioxidant properties.

The market is segmented by end product into cakes and pastries, bread and rolls, biscuits and cookies, and others. In 2018, bread and rolls held the largest share of more than 40.0% due to high consumption by the Western countries as well as at the global level. The segment growth is attributed to significant demand for healthy bread alternatives, which is driving the manufacturers to produce vegan-based bread. For instance, in the U.S., a chain of grocery stores named Trader Joe’s introduced vegan banana bread loaf in all its stores. 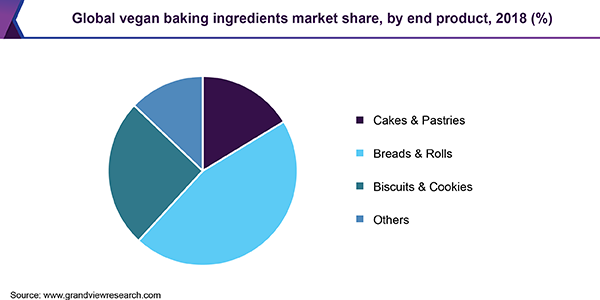 Europe held the largest share of 34.1% in 2018. The European market finds the application of these ingredients in the food industry to serve the needs and demands of a large consumer base. Moreover, the food industry in Europe is inclined towards innovation and up-gradation in the food products to meet the demand of vegan consumers. For instance, SAFE- Vegan and Vegetarian Working Group in Europe took initiatives to highlight the need for a vegan and vegetarian legislation in the EU.

APAC is the fastest-growing region, expanding at a CAGR of 6.3% from 2019 to 2025. An increase in disposable income and industrial development are the prime factors for the growth of this market. Improved standard of living and change in food preferences are driving the market in this region. For instance, in Japan, a bakery chain named Pompadour launched its vegan curry bread in all outlets, which is made up of organic and clean ingredients.

The major players in the market are focusing on expanding their business in emerging regions such as the Asia Pacific, Central and South America, and the Middle East and Africa.

To gain a competitive advantage in the market, the leading players are focusing on product launches and portfolio expansion. For instance, Ingredion launched a novel product named potex and it is manufactured using potato fibers to enhance the texture and freshness of the bakery product. Cargill signed an agreement with six distribution channel partners in North America to expand and strengthen its network in the region. Some of the prominent players in the vegan baking ingredients market include:

This report forecasts revenue growth at the global, regional, and country levels and provides an analysis of the latest industry trends in each of the sub-segments from 2015 to 2025. For this study, Grand View Research has segmented the global vegan baking ingredients market report based on the product, end product, and region:

How big is the vegan baking ingredients market?

What is the vegan baking ingredients market growth?

b. Europe dominated the vegan baking ingredients market with a share of 33.9% in 2019. This is attributable to the food industry in Europe inclining towards innovation and upgradation in the food products to meet the demand of vegan consumers

Who are the key players in vegan baking ingredients market?

What are the factors driving the vegan baking ingredients market?

b. Key factors that are driving the market growth include increasing number of people adapting to veganism, rise in demand for vegan baking ingredients, and continuous research and development in this market.