The global vegan confectionery market size was valued at USD 1.11 billion in 2021 and is expected to expand at a compound annual growth rate (CAGR) of 11.8% from 2022 to 2030. The increasing shift among consumers towards plant-based diets, as a result of lifestyle disorders and health concerns, has been fueling the growth of the worldwide market in recent years. Social media posts on the vegan lifestyle and its benefits also encourage consumers to adopt plant-based diets, thereby contributing to market growth. 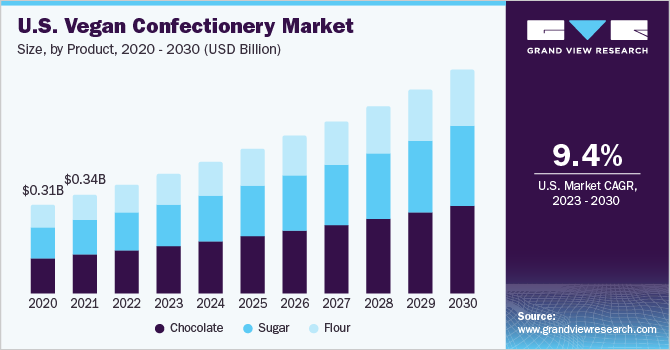 The unprecedented COVID-19 outbreak caused major supply chain disruptions, forcing brands to focus on leveraging their online presence owing to lockdowns in most countries. Further, the disrupted supply chain impacted the entire food industry worldwide. The small and craft chocolate businesses suffered the most due to shortages in supply, coupled with their inventories being depleted as a result of panic buying by customers.

Increasing concerns about animal cruelty, personal health & wellness, and the environment have been popularizing plant-based lifestyles among consumers worldwide. As a result, the plant-based food industry has been expanding over the years and offering a wide range of products. Both small and large food firms are entering the industry to tap the potential offered by the rising demand. In June 2018, Sodexo, a large catering company, partnered with the Humane Society of the United States to create over 200 plant-based food items for campus dining halls and corporate foodservice facilities.

Furthermore, the increased number of new product launches in the vegan confectionery industry has accelerated market growth. As per The Vegan Society, the product launches grew by 185% between 2012 and 2016 in the U.K. The large retail chains, including Walmart, are interested in offering more plant-based food items. In addition, an increased number of lactose-intolerant people has raised the demand for dairy-free confections across the globe. These factors are expected to accelerate the growth of the market in the upcoming years.

There is significant scope for the growth of the global vegan confectionery market, as the concept of veganism is gaining prominence in developed countries such as the U.K., the U.S., Australia, New Zealand, Germany, Italy, France, and Canada. In addition, various Middle Eastern countries such as Israel and Saudi Arabia have been witnessing a growth in the vegan population, which offers several growth opportunities for manufacturers and new entrants.

Many countries in Europe have been severely impacted by the COVID-19 crisis, which has led to a decline in economic activities. Germany, Italy, and France being the most visited countries in Europe, are creating opportunities for vegan candy manufacturers to supply on-the-go vegan candies in form of packaged and ready-to-eat food. With the largest confectionery product consuming population, the region is taking initiatives to improve the quality and standard of food products by the means of vegan ingredients.

The chocolate product segment dominated the market with around 40.0% share of the total revenue in 2021. Demand for plant-based chocolate confectionery has grown significantly due to its low-fat and low cholesterol properties. The adoption of the product is increasing remarkably among millennials and centennials. Therefore, manufacturers in the industry have been introducing new products targeting these population groups. For instance, in February 2020, Barry Callebaut, a Switzerland-based chocolate manufacturer, launched its ‘Plant Craft’ Product line. The new product line of the company targets the millennials and centennials with a wide range of chocolate, nuts, cocoa, and fillings.

Similarly, in January 2020, Cadbury, a MondelÄ“z International-owned brand, launched its plant-based milk chocolate with its Veganuary Campaign. However, the company found it challenging to substitute dairy with plants that offer the chocolate a similar texture and taste as the original one and is also nut-free. In addition, the growing popularity of ruby chocolates is expected to widen the growth opportunities.

Sugar vegan confectionery is anticipated to witness the fastest growth over the forecast period due to the rising adoption of plant-based candies. Over the past few years, several new vegan candy products have been launched. For instance, in February 2018, Dylan's Candy Bar launched a new candy line “Treat Yourself”. This new product line is gluten-free and the packaging is also different from the conventional bright colors.

The offline distribution channel held a larger revenue share of over 80.0% in 2021. The plant-based food industry has been promoting its products by entering into partnerships with grocers and retail chains. For instance, PLANT-BASED FOODS ASSOCIATION partnered with Lucky Stores and started a campaign called “Fall in Love with Plant-Based”. The association has been distributing educational booklets, discounts, and tasting demonstrations for the consumers at selected stores. 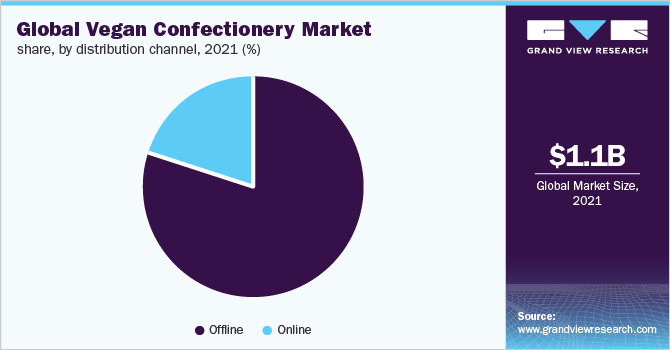 Moreover, as of 2019, around 95% of grocery stores in the U.S. sell plant-based products, including vegan confectionery. Market participants are also expanding their offline distribution channels to enhance the consumer reach. For instance, in February 2018, Dylan's Candy Bar planned to open new stores in Japan and Dubai, adding to its current network of 16 outlets. Further, manufacturers have started listing vegan candies at vitamins and supplements stores owing to the large footfall of health-conscious customers and fitness enthusiasts in these stores.

The online distribution channel is projected to witness faster growth during the forecast period. The increasing number of online retailers with competitive pricing is boosting the growth of this segment. In addition, the growth can be attributed to the increasing dependency of generation X, millennials, and generation Z on the internet and e-commerce.

North America dominated the market for vegan confectionery in 2021 with over a 37.0% share of the global revenue. According to a report published by Good Food Institute in 2020, sales of plant-based foods through groceries grew by 29% between 2017 and 2019 in the U.S., as compared to the 4% growth of the total retail food sales. Furthermore, the vegan population increased by 600% in the U.S. between 2014 and 2017. As of 2019, veganism is one of the leading search trends in Canada.

Major players in the industry are opening new stores in order to cater to the growing population of vegan enthusiasts in the region. For instance, in July 2020, Aldi announced that it would open 70 new stores across the U.S. by the end of 2020. At the time, the company already had 2000 stores across the U.S. Such trends are anticipated to boost the sales of vegan confectionery, through offline channels, in the region.

Asia Pacific poses a wide scope for the growth of the market in the upcoming years. Growing demand for dairy-free, gluten-free, and plant-based products will drive the market in the region. Increasing health consciousness in the countries of the region, including China, Japan, India, and Indonesia, is expected to fuel the demand for vegan confectionery in the upcoming years.

The market can be characterized as a niche market with the presence of both small and large players. Companies have been expanding their product portfolio with innovative products. For instance, in April 2020, Freedom Confectionery launched its new “mallow out” bars in the U.K. These plant-based mallow bars are coated with vegan chocolate and are also free from gluten, soy, and GMO. The “mallow out” bars are available in all key health food retailers in the U.K., including Tree of Life, Suma, and The Health Store.

Some of the key players operating in the vegan confectionery market include:

This report forecasts revenue growth at global, regional & country levels and provides an analysis of the latest industry trends and opportunities in each of the sub-segments from 2017 to 2030. For this study, Grand View Research has segmented the global vegan confectionery market report on the basis of product, distribution channel, and region:

How big is the vegan confectionery market?

b. The global vegan confectionery market size was estimated at USD 1.11 billion in 2021 and is expected to reach USD 1.23 billion in 2022

What is the vegan confectionery market growth?

Which segment accounted for the largest vegan confectionery market share?

b. North America dominated the vegan confectionery market with a share of 37.2% in 2021. This is attributable to the rising popularity of a plant-based diet among consumers in the U.S.

Who are the key players in the vegan confectionery market?

What are the factors driving the vegan confectionery market?

b. Key factors that are driving the vegan confectionery market growth include an increasing shift among consumers toward plant-based diets, as a result of lifestyle disorders and health concerns.