The global animal vaccines market size was valued at USD 11.8 billion in 2021 and is expected to expand at a compound annual growth rate (CAGR) of 9.3% from 2022 to 2030. The increasing outbreaks of cattle disease and the ever-expanding livestock population are the prime factors for the wide acceptance of the ruminants especially cattle vaccines globally. Animals serve as a vital source of meat, protein, food, milk, and other commercial products such as wool and leather. Most used animal vaccines comprise rabies vaccines, equine influenza virus vaccines, and foot and mouth diseases vaccines, which prevent the transmission of infectious agents by mimicking the naturally acquired immunity. 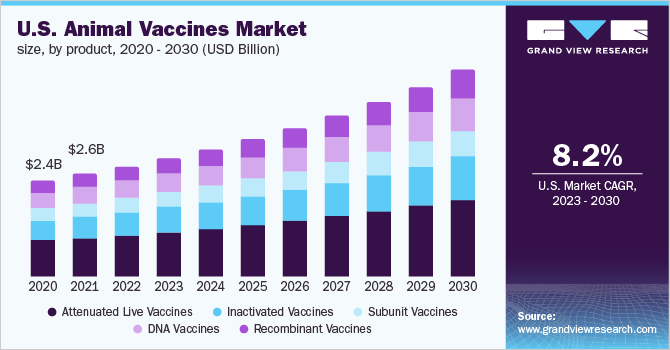 Rising concerns over food security and increasing animal husbandry are boosting the demand for animal vaccines for the livestock population. Increasing demand for animal products has led to growth in livestock production globally. Furthermore, various factors such as variation in food preferences due to changing lifestyles and population growth are increasing the demand for livestock products. These factors are aiding in the growth of the market. Furthermore, the perpetual introduction of technologically advanced vaccines and the outbreak of livestock diseases have contributed to the shifting market dynamics.

The market saw moderate growth in 2020. The COVID-19 pandemic has impacted all industries, including animal vaccines. During the initial time of the pandemic, OIE has confirmed that no animals can spread this virus. However, human-to-animal transmission has been reported in a few countries. IDEXX Laboratories and other companies have tested many dogs and cats for the virus, with test results being negative. In the initial months of the pandemic, there was speculation that it may spread through birds, which negatively impacted the livestock industry. In the U.S., several pig and poultry processing plants shut down after the major outbreak. The poultry sector of India has already lost around USD 1 billion due to fears and concerns about the novel coronavirus.

In December 2020, a bird flu outbreak was reported in 9 Indian states. Due to this, the price of poultry products has gone down, severely affecting the overall livestock industry. According to the Poultry Federation of India, chicken consumption has reduced to 50%, with a drop of 30% in the prices, as of December 2020. While most of the Asian countries have adopted vaccination policies, India has primarily resorted to the culling of birds. Punjab and Haryana state governments are close to legalizing vaccinations, which can positively impact the market growth.

The coronavirus spreads from animal to animal with contact or aerosol transmission, thus infecting other animals. Incidents such as COVID-19 infected farmed minks were reported in numerous nations such as the U.S. and Denmark during late 2020. Thereby, such incidents have triggered the need for the COVID-19 animal vaccine. As a result, the market players are getting involved to manufacture veterinary vaccines against COVID-19. For instance, Zoetis is in process of donating over 11,000 doses of its experimental COVID-19 vaccine to help protect the health and well-being of Zoo animals. On the other hand, in April 2021, Russia has registered the world's first Covid-19 vaccine called Carnivac-Cov for animals. Thus, the growing cases of COVID-19 infections in domestic and wild animals will promote the acceptance of animal vaccines for safeguarding preventive animal health, thus soaring the industry growth.

In June 2021, the U.K. announced the establishment of a U.K. Animal Vaccine Manufacturing and Innovation Centre in Surrey, intending to accelerate the vaccine development for livestock and to control the spread of viral diseases including coronavirus. The U.K. government will contribute USD 24.79 million while the Bill & Melinda Gates Foundation will contribute USD 19.43 million to establish this center. Thereby, the research initiatives adopted by the market players, growing COVID-19 infection cases in animals, and government support will enable the significant expansion of the animal vaccines industry.

The increasing prevalence of zoonotic diseases can negatively impact human lives, which is likely to boost the demand for animal vaccines. Emerging and exotic animal diseases are a growing threat to human and animal health and jeopardize food security. The rise in the population of both humans and animals along with environmental degradation and globalized trade and travel improves opportunities for the transmission of pathogens within and between species. The resulting ailments pose massive challenges currently and in the future. In most of the world, improved demand for animal protein has resulted in increased commercial food animal production. Emerging zoonotic diseases of both companion and livestock animals are a major threat to public health. The world will inevitably continue to experience emerging disease outbreaks in the coming decades. Therefore, animal vaccines can play a crucial role in controlling emerging diseases.

The attenuated live vaccines segment dominated the market for animal vaccines and accounted for a revenue share of over 35.0% in 2021. Live attenuation is the oldest vaccination method used in the veterinary field. This method is also under trial for the development of additional applications. Some of these alternatives include the development of protein subunit vaccines for swine, which are given intramuscularly. These products aid in reducing the mortality rate and improve the life span of disease-affected swine.

The recombinant vaccine segment is expected to exhibit lucrative growth over the forecast period. These vaccines help reduce the risk of pathogenicity in animals after vaccination. Recombinant vaccines are also expected to help achieve vaccination against multiple virus strains as recombinants can carry multiple gene inserts. These vaccine formulations can avoid the need for adjuvants, increase the viability of the vaccine, and improve stability. Some of the recombinant vaccines available for veterinary medicine are vaccines against canine distemper, pseudorabies, Newcastle disease, Lyme disease, and avian influenza.

The livestock segment dominated the market with a revenue share of over 70.0% in 2021. This can be attributed to the factors such as rising livestock population, supportive government initiatives, and the outbreak of diseases among cattle and sheep. Vaccinations that are developed for preventing E. coli include Aviguard and Nobilis E. coli inac by Merck & Co., Inc. According to Zoetis, the prevalence rate of E. Coli in various cattle categories (feedlot cattle, cattle on irrigated pasture, cattle at slaughter, and cattle grazing rangeland forages) ranges between 0.2% to 27.8%.

The companion segment is expected to exhibit the fastest growth rate during the forecast period. Canine distemper virus is carried by house pets as well as ferrets and requires strictly preventive vaccination as no post-infection treatment is available. The Morbillivirus affects dogs, foxes, raccoons, and wolves to cause distemper and is transmitted through the air as well as other modes of contact between infected and healthy animals. Immunization of dogs is essential as canine distemper destroys the respiratory, urogenital, and gastrointestinal tract. Dogs suffering from bacterial infections of the gastrointestinal tract and newborn pups are more susceptible to this disease. Vanguard, DHPPi/L Vaccine, DHP, and Megavac 6 and 7 are a few canine distemper vaccines available in the market. 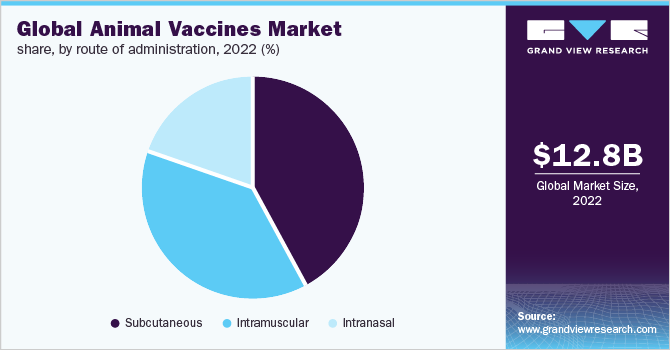 The intranasal segment is expected to exhibit the fastest growth rate of 10.0% during the forecast period owing to its increasing popularity. Mostly, intranasal vaccines are limited to a single dose of vaccine. The growing prevalence of respiratory diseases in animals and rising research activities by market players for the development of better vaccines are expected to fuel the market growth.

North America dominated the market and accounted for a revenue share of over 25.0% in 2021. The region is expected to remain dominant throughout the forecast period. This large share can be attributed to the high prevalence of livestock and zoonotic diseases leading to large-scale animal deaths. In addition, the large presence of well-established pharmaceutical firms that are consistently striving for wide commercialization of their vaccines and augmenting their geographical reach is expected to boost the market growth. In addition, the rising incidence of canine disorders, which is increasing the adoption of vaccination for the same, and the rising pet population in the U.S. are some of the key factors contributing to the expansion of the regional market.

In Asia Pacific, the market is expected to register the fastest growth rate during the forecast period. The anticipated rise in the livestock population and government initiatives, especially in developing economies, are some of the prime factors expected to boost the market growth in the region. According to the National Dairy Development Board, India’s cattle population was 192.5 million in 2019, as compared to 190.9 million in 2012. Hence, such a large cattle population in the country calls for vaccine demand. The market is driven by high R&D expenditure by many major players, combined with rising attempts for the commercialization of veterinary vaccines and inoculations at tolerably low prices.

The market is highly competitive and marked by the presence of various small and large animal vaccine manufacturers. The key parameters affecting competition include rapid adoption of veterinary preventive injections, coupled with government-aided bulk purchase of veterinary vaccines. In addition, in an attempt to retain share and diversify the product portfolio, major players are frequently opting for various strategies such as mergers and acquisitions, partnerships, and new product launches.

For instance, in February 2021, Ceva partnered with the French National Research Institute for Agriculture, Food, and Environment (INRAE) for R&D in the prevention of infectious diseases from animal origin and improvement of animal health. In January 2021, Zoetis launched the Poulvac Procerta HVT-IBD vaccine for the protection of poultry against Infectious Bursal Disease (IBD). This added to the company’s line of recombinant vector vaccines. Some prominent players in the global animal vaccines market include:

This report forecasts revenue growth at the global, regional, and country levels and provides an analysis of the latest industry trends and opportunities in each of the sub-segments from 2017 to 2030. For the purpose of this study, Grand View Research has segmented the global animal vaccines market report on the basis of product, animal type, route of administration, and region:

How big is the animal vaccines market?

Who are the key players in the animal vaccines market?

What is the animal vaccines market growth?

Which segment accounted for the largest animal vaccines market share?

b. North America dominated the animal vaccines market and accounted for the largest revenue share of 29.7% in 2021.

What are the factors driving the animal vaccines market?