The global veterinary artificial insemination market size was valued at USD 3.96 billion in 2020 and is expected to expand at a compound annual growth rate (CAGR) of 5.94% from 2021 to 2028. The technique has been commercially available for over 60 years and has been utilized very effectively in the cattle and dairy industry.AI can reduce many of the risks involved with animal breeding and disease transmission, which is acting as a key factor in boosting the market growth. Increasing productivity using AI technology is boosting the market growth. Female offspring born through artificial insemination are found to produce more milk than normal offspring. The use of semen extenders containing antibiotics is also helpful in preventing the transmission of bacterial diseases. 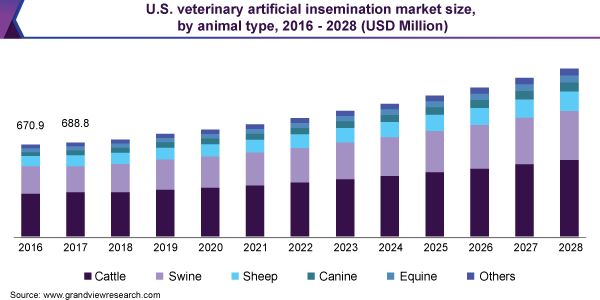 Furthermore, the entire procedure of AI is considered to be much more hygienic than natural mating. Moreover, as the production conditions and the farmers' needs evolve, many of the animal breeds are no longer suitable for the majority of farms. However, artificial insemination is used as a preferred reproduction method for such breeds and makes it possible to continue to farm the breeds in situ.

The COVID-19 pandemic has no evidence or approval that animals can spread COVID-19 to humans. The coronavirus pandemic has enfeebled the supply chain and has formed a deficiency of animal health products, such as nutritional feed, worldwide. Hence, it might be comprised of animal feeding, which would impact reproductive efficiency. To safeguard employees and farmers against the Covid-19, in June 2020, the Animal Husbandry Department of India launched a program. Under this program, the department was offering telephonic assistance to poultry owners and farmers. In addition, artificial insemination services were being delivered to farmers at their doorstep during the lockdown period. Thereby, such initiatives have contributed to market growth.

The increasing human population is also a major factor leading to the continuous need for growing animal productivity. Moreover, associated advantages such as increased efficiency of bull usage, genetic selection, decreased cost of housing, handling bull, and safety for farmers and animals are anticipated to increase the adoption of AI in the coming years. Increasing calf prices are also leading to the adoption of AI technology among farmers. According to a report published by the Beef Cattle Research Council in March 2018, bull prices were USD 5,500 to USD 8,000 in Canada from 2015 to 2016. These prices decreased from USD 4,500 to USD 6,500 from 2017 to 2018 owing to the adoption of AI.

The demand for the genetically superior breed of animals is increasing, which, in turn, is increasing the demand for artificial insemination procedures in animals. The industry players are continuously trying to develop new products, along with partnerships, collaboration, and acquisitions, to sustain their market share. For instance, in August 2020, Cogent collaborated with AB Europe, a sheep breeding company, to launch a novel sexed semen service for sheep producers in the U.K. In May 2018, Recombinetics partnered with SEMEX for the implementation of a precision breeding program that improved animal health and well-being through hornless dairy cattle genetics.

The cattle segment held the largest share of 46.4% in 2020. Increased adoption of cattle for artificial insemination procedures, rising milk consumption, and production of beef are the key factors responsible for the significant growth of the segment. For instance, according to the data published by the UN FAO in 2018, beef and buffalo production increased from 69.56 million tons in 2017 to 71.61 million tons in 2018. Furthermore, the rising consumption of milk and milk products is positively impacting the segment growth.

The equine segment is anticipated to grow at a lucrative rate over the forecast period. The growth can be attributed to reducing the risk of disease transmission and increasing productivity using AI, which is increasing the adoption. Moreover, the protection of endangered species by artificial insemination is propelling the segment growth. Disease transmission risks also got reduced with the usage of AI technology. The aforementioned factors are expected to propel the segment growth in the coming years.

The normal semen segment accounted for the largest share of 76.3% in 2020 and is expected to maintain its lead during the forecast period. This is attributed to the low price of normal semen as compared to sexed semen. For instance, according to a study published by the Italian Journal of Animal Science in May 2017, the conception rate of sexed semen as a percentage of normal semen ranged from 71.8% to 78.5%, indicating that normal semen had a higher fertility rate than sexed semen.

Sexed semen is expected to witness the fastest growth over the forecast period. Sexed semen technology is relatively new and is being adopted to increase the rate of herd expansion. It has reliable effects on the gender of the offspring. Sexed semen was commercialized in 2001 in the U.S. and license was granted to Sexing Technologies. Factors such as consolidation of elite breeding herds, adoption of the latest technology, and high consumption of animal protein are fueling the growth of the sexed semen segment.

The animal husbandry segment accounted for the largest share of around 46.0% in 2020. The growth can be attributed to the majority of the semen collection and AI procedures being performed in small and large breeding farms. Moreover, increasing government initiatives and demand for milk and protein are increasing the adoption of AI technology. For instance, in June 2020, the Indian government approved around USD 2.06 billion for the Animal Husbandry Infrastructure Development Fund (AHIDF). In February 2018, Alibaba Cloud, DEKON Group, and Sichuan Tequ Group collaborated to use ET Brain technology for pig breeding in China. 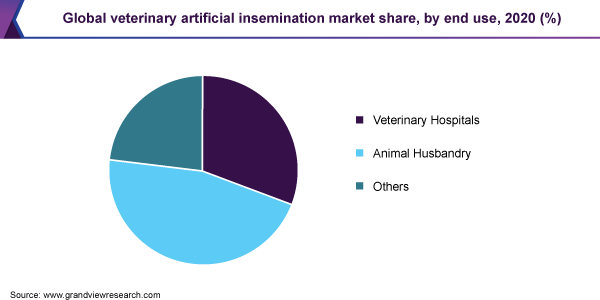 Veterinary hospitals held a considerable market share in 2020. An increasing number of hospitals carrying out artificial insemination procedures in developed and developing countries and the rising number of veterinarians are the key factors driving the segment. Other end-use segments of the market include veterinary clinics and private veterinarians carrying out artificial insemination procedures in farms. The provision of home services by veterinarians and supportive government regulations in developing countries are boosting the segment growth. For instance, as per the AI Development Plan launched in 2017 in China, the Chinese government describes artificial insemination as a new focal point of international competition and declared itself open to the world’s premier AI innovation center by 2030.

The Asia Pacific held the largest share of 30.5% in 2020 owing to the presence of a large livestock population in this region. Increasing demand for milk and animal-based protein, along with government initiatives, is propelling the market growth. In the Asia Pacific market, India held a revenue share of 24.4% in 2020. For instance, in August 2019, the Department of Veterinary, Gynecology, and Obstetrics of Madras Veterinary College started artificial insemination in cattle using sexed semen. Moreover, China has the third-largest cattle inventory and actively performing artificial insemination technology in farms to increase productivity, which is boosting the revenue.

Latin America held a considerable market share in 2020. Brazil is one of the major countries in this region where the technique has been utilized effectively. Herds in some countries including Brazil have implemented fixed-time artificial insemination (FTAI) techniques to leverage their profits. The consumption of sexed semen in Brazil has grown steadily over the years. According to the Brazilian Association of Artificial Insemination (ASBIA), from January to September 2018, 306,052 doses of national sexed semen were marketed for beef and dairy cattle while it reached 503,078, an increase of 30.83% in 2020. The U.S. is another country where almost 90% of the milk-producing cattle population utilizes artificial insemination. For instance, according to the Brazilian Association of Artificial Insemination, commercialized semen doses increased from 7 million in 2003 to nearly 14 million in 2017.

The market for veterinary artificial insemination is highly fragmented in nature. The product portfolio includes frozen semen, fresh semen, sexed semen, semen storage services, and others. The continuous demand from the food industry is further propelling the market growth for genetically modified animals to increase productivity.

The leading players are involved in new product launches, collaborations, mergers & acquisitions, and regional expansions to gain maximum revenue share in the sector. The development of new disease-resistant breed helps companies to expand their existing portfolio of animal genetic and geographical reach. For instance, in May 2019, Genus plc partnered with Beijing Capital Agribusiness (BCA) located in China. BCA is expected to assist the company in patented technology applications to develop Porcine Reproductive and Respiratory Syndrome virus (PRRSv)–resistant animal. In April 2018, Select Sires introduced an Elite sexed fertility product line. The company would identify sires with superior fertility sex-sorted semen using an Elite Sexed Fertility designation, enhancing its product base. Some prominent players in the global veterinary artificial insemination market include:

This report forecasts revenue growth at the global, regional, and country levels and provides an analysis of the latest industry trends and opportunities in each of the sub-segments from 2016 to 2028. For the purpose of this study, Grand View Research has segmented the global veterinary artificial insemination market report on the basis of animal type, product, end use, and region:

How big is the veterinary artificial insemination market?

b. The global veterinary artificial insemination market size was estimated at USD 3.96 billion in 2020 and is expected to reach USD 4.17 billion in 2021.

What is the veterinary artificial insemination market growth?

b. The Asia Pacific dominated the veterinary artificial insemination market with a share of 30% in 2019. This is attributable to the large cattle population in the region.

Who are the key players in the veterinary artificial insemination market?

What are the factors driving the veterinary artificial insemination market?