The global veterinary oncology market size was estimated at USD 199.9 million in 2019 and is anticipated to witness a CAGR of 10.7% during the forecast period. The increasing pervasiveness of cancer in the pet population and rising adoption of veterinary cancer therapy as a treatment method are propelling market growth. Growing expenditure on animal healthcare in the developed economies due to rising willingness to spend on pet healthcare by owners and initiatives by government for the veterinary cancer treatment are the major factors driving the market growth.

In 2016, the American Animal Hospital Association (AAHA) stated that neoplastic disease was the most common terminal pathological procedure in 73 out of 82 canines and also the reason for death in canines with 1 year of age. The disease often leads to traumatic injury. In addition, around 32% of the feline population was detected with Feline Leukemia Virus (FeLV). FeLV was also reported to be one of the foremost causes of lymphoma in feline. In addition, in October 2019, the American Veterinary Medical Association (AVMA) anticipated that approximately 1 in 4 dogs will develop neoplasia at some stage of their lives. Therefore, with the rising number of these cancer incidents, there is a necessity for effective veterinary oncology treatment in these animals. 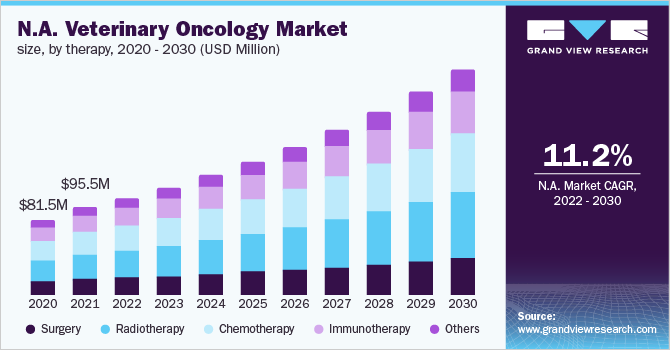 Furthermore, the increasing number of veterinary clinical studies for evaluating the safety and efficacy of different oncology treatments in pets is further boosting the market growth. AVMA created a database called AVMA Animal Health Studies Database (AAHSD) as a tool for investigators performing prospective veterinary clinical studies. Such studies by the researchers focused on veterinary oncology treatment are anticipated to fuel the market growth over the forecast period.

For instance, in July 2019, the National Cancer Institute (NCI) supported clinical trial testing for veterinary oncology treatments in animals. The aim of the trials offered by veterinary medical schools worldwide was to find new cancer treatments that will preserve the dog’s quality of life. The trail was also conducted to provide an insight into how the veterinary oncology treatments and approaches being examined in dogs may be translated to help people with cancer, as the humans and dogs share similar biology for cancer.

Moreover, spiraling collaborations for R&D of targeted therapies for cancer in companion animals is another contributing factor for the market growth. For instance, in 2016, Zenoaq company, in collaboration with Nexvet Biopharma, developed Monoclonal Antibodies (MAbs) that attach and inhibit the immuno-oncology targeted programmed cell death protein 1 (PD-1). Such activities represent a promising yet challenging perspective and are also expected to bring a new paradigm in cancer therapy for pets.

Chemotherapy is followed by radiology treatment due to increasing research studies to test the safety and efficacy of Stereotactic Radiosurgery Treatment (SRT) in animals. SRT helps control the tumor to an extent and ultimately reduces its toxicity. According to the Journal of Hematology and Oncology in 2018, Proton Beam Radiation Therapy (PBRT) aims to deliver the radiation dose on a tumor cell and deliberately to the surrounding tissue and organs with very little or no irradiation effect in pets. Rising adoption of target specific therapies will boost market growth over the forecast period.

In the animal type segment, canine accounted for the largest revenue share in the year 2019 owing to the high prevalence of cancer in the canine population and increasing life expectancy. Moreover, the increasing prevalence of cancer in this population has further engaged researchers to carry out comparative veterinary oncology treatment with a large number of clinical trials on canine as a biological model. According to a PubMed report in 2016, more than 1 million pet dogs are diagnosed with various types of cancers in the U.S. every year.

Furthermore, favorable initiatives by the government are also contributing significantly to the market growth. For instance, the Comparative Oncology Trials Consortium (COTC), under the NIH-NCI-Center for Cancer Research's Comparative Oncology Program is dedicated to designing and executing clinical studies in canines with cancer to gauge novel oncology therapies. This program focuses on carrying out clinical trials for pets with cancer, thus boosting the market growth. In addition, these trails are also expected to provide potential alternatives for oncology treatment with novel therapies in development.

The lymphoma cancer type segment accounted for the largest share of revenue in 2019, owing to the increasing number of the pet population, especially canine, being affected by the disease. According to a 2016 PubMed report, an estimated incidence rate of 20-100 cases per 100,000 dogs are contracted by this disease. 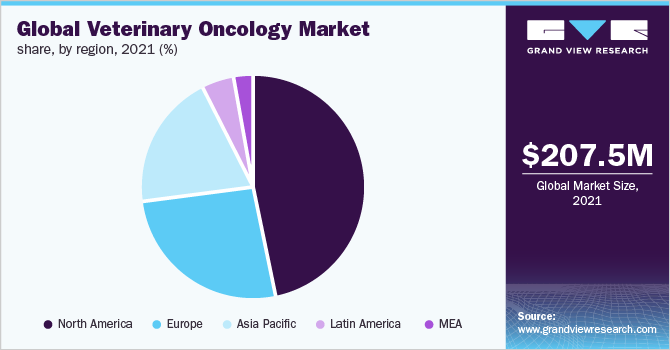 Furthermore, the proven oncology treatment for lymphoma is chemotherapy, which also varies depending on the type of cancer. According to American Kennel Club, the most common types of lymphoma in dogs are mediastinal lymphoma, multicentric lymphoma, alimentary lymphoma, and extranodal lymphoma, which vary in survival rates, aggressiveness, and clinical signs. The organization also states that 80 to 85 % of lymphomas in dogs were found to be multicentric. Lymphoma is followed by mast cell cancer along with mammary and squamous cell cancer. Rising incidence of mast cell cancer in dogs is further expected to drive the market growth.

North America is projected to dominate the market over the forecast period. Major factors attributed to the market growth are increasing focus on pet health, the presence of a large number of pet drug manufacturing companies, and speedy adoption of innovative pet care medications. In addition, increasing number of funding for pet oncology treatment in this region by the government and the presence of market giants in the oncology market is also driving the market growth.

For instance, the National Cancer Institute invested USD 11.5 million in grants to six veterinary schools in 2017. The funding was provided to examine immunotherapy treatments for four different cancer types in the dog population. Therefore, increasing number of funding for evaluating veterinary oncology treatment is projected to surge pet oncology research and will thereby propel the market growth.

Furthermore, the European market is anticipated to be the second largest region in terms of revenue due to the presence of regulatory authorities focused on scientific progress in veterinary and comparative oncology. These authorities collaborate with big market players to focus on developing unparalleled therapeutic solutions for pet oncology.

Some of the key players in the market are PetCure Oncology; Accuray Incorporated; Varian Medical Systems; Boehringer Ingelheim; Elanco; Zoetis Karyopharm Therapeutics, Inc.; One Health; and Regeneus Ltd. These players are focused on implementing new strategies such as regional expansion, mergers, acquisitions, new product introduction, partnerships, and distribution agreements to increase their revenue share and mark their presence.

Elanco acquired Aratana Therapeutics in April 2019, after which, the company declared the formation of a commercial team devoted to the veterinary specialty business. Furthermore, another contribution by the market player in August 2019, was the initiation of Phase 2 clinical trial by PharmAust in Australia with its leading veterinary drug candidate, monepantel, to treat canine cancer.

This report forecasts revenue growth at global, regional, and country levels and provides an analysis of the latest industry trends in each of the sub-segments from 2016 to 2027. For the purpose of this study, Grand View Research has segmented the global veterinary oncology market report based on therapy, animal type, cancer type, and region: