The global veterinary pain management market size was estimated at USD 1.15 billion in 2018 and is expected to witness a CAGR of 5.3% during the forecast period. Upward trend of pet adoption and increasing awareness regarding better pet care are expected to accelerate the growth further. Investments in technological advancements and innovation are projected to create growth opportunities for key players in the forthcoming years.

According to the American Veterinary Medical Association (AVMA) in 2017, around 68% household in the U.S. had pets. In addition, according to the American Pet Products Association (APPA), total pet industry expenditure was USD 69.4 billion in 2017 and it is expected to rise further in near future thereby providing lucrative growth opportunities to the market players. 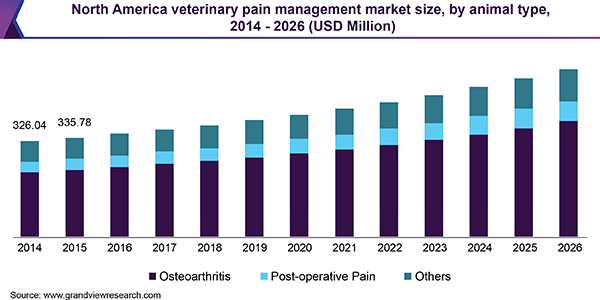 Increasing incidence of pet obesity is further fueling the veterinary pain management market. According to the Association for Pet Obesity Prevention (APOP) in 2017, 56% dogs and 59% cats were recorded as obese in U.S. Obesity increases the risk of joint diseases, diabetes mellitus, cancer and other chronic conditions. Furthermore, according to kingsbrook vets, in 2017, 20% of all pet dogs in the U.S. had osteoarthritis regardless of their age. Obesity also increases the risk of cancer in canines.

Rise in initiatives by government organizations to promote animal health globally, is expected to contribute to market growth. For instance, in 2016 the European government invested USD 4.7 million in animal healthcare expenditure according to a report by the European External Action Service (EEAS). In January 2016, central state government of India raised the import duty on veterinary products from 5% to 7.5% in an attempt to boost in pharmaceutical manufacturing and the Make in India campaign.

Nonsteroidal Anti-inflammatory Drugs (NSAIDs) accounted for the largest market share in terms of revenue in 2018 and is expected to expand at a lucrative CAGR over the forecast period. These are the most commonly used medications for pain and inflammation associated with osteoarthritis. Companies are trying to develop new NSAIDs with lesser adverse effects and reactions. For instance, Elanco Animal Health launched Galliprant in 2017 which accounted for around 12% of the U.S. NSAIDs market share in that year. Moreover, stringent regulations pertaining to opioid usage are expected to drive the segment growth in the coming five years.

Anesthetics segment is anticipated to experience steady growth over the forecast period. These products are used during surgeries and to reduce the post-operative ache. According to an APPA report, around 20.8 million dogs in the U.S. went through surgery in 2016 and among them 5.8 million had very painful surgery. In a recent development, Aratana Therapeutics got FDA approval for Nocita in 2016 and it is indicated for post-operative surgeries.

On the other hand, opioids segment is expected to showcase gradual growth over the forecast period, owing to stringent regulations. The market is strictly regulated by the FDA and the updated guidelines regarding manufacture, storage, and sell of opioid products; aiming to curtail the opioid abuse by pet owners for personal use. This factor is expected to restraint growth of this segment in the forthcoming years.

Osteoarthritis (OA) segment accounted for the largest market share in terms of revenue in 2018, owing to high prevalence of the disease; especially in canine animals. In 2015, 14.7 million dogs were diagnosed with osteoarthritis in U.S. Nutraceuticals are preferred for mild and NSAIDs, coxibs are prescribed for moderate to severe pain associated with OA. The prescribed drugs for the disease are Galliprant, Rimadyl, Meloxicam, and Metacam among others.

Rising surgical procedures owing to incidence of diseases and demand for better pet care are instrumental in driving adoption of pain management pharmaceuticals in developed as well as developing economies. Post operative ache is a major cause for death in many animals due to the lack of analgesics. Hence, companies focus on developing analgesics which can address the post operative pain as the use of opioids are strongly monitored. The others segment include pain due to cancer, abdominal and neuropathic pain among others. This segment is also expected to showcase steady growth over the forecast period owing to high prevalence of cancer and other disorders.

Livestock animal segment accounted for the largest market share in terms of revenue in 2018, owing to increasing incidence of chronic diseases, awareness amongst animal healthcare organizations, and high animal healthcare spending in developing countries. It is difficult to assess pain in livestock animals and the visible symptoms are lameness, increased respiratory rate and increased vocalization, expiratory grunt, and teeth grinding. The most commonly used medication are NSAIDS, α2 adrenergic drugs, and local anesthetics.

Companion animal segment is expected to exhibit steady growth during the forecast period owing to increase in their ownership, awareness, and demand for efficient animal care. Moreover, increasing incidence of obesity and other chronic conditions, such as osteoarthritis, and cancer, is further propelling the market. According to an Animal Care Foundation report, 32 million cats and 65 million dogs in the U.S. were diagnosed with cancer in 2017. This reason is expected to boost the market growth in the near future.

Hospitals and Clinics led the end-use segment in 2018 owing to the availability of a wide range of treatment as well as diagnostic options in these facilities. Moreover, increasing number of surgeries and demand for outpatient facilities are major growth propellers. 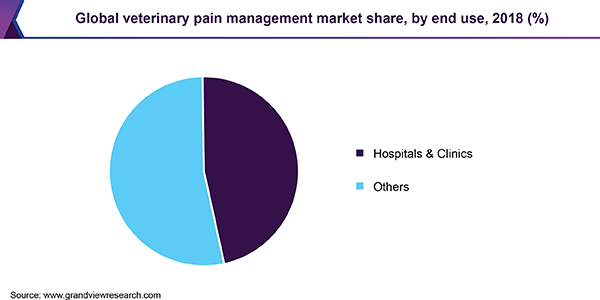 The others segment includes research centers, emergency facilities, and various animal care centers. This segment is expected to witness lucrative growth over the forecast period owing to the technologically advanced systems used within these facilities. Some of these include pet owner mobile technology and efficient information management systems. The lucrative CAGR can also be attributed to increasing R&D investments and funding to develop advanced treatment options. Investments to enhance diagnostic procedures through development of new generation technologies for diagnosis in companion animals are also expected to bode well for segment growth over the forecast period.

North America accounted for of the largest revenue share in 2018 owing to the rising number of pet ownership and demand for effective animal care. Moreover,highly developed and well-established animal healthcare facilities are further fueling the growth. As of 2017, prescription by the veterinarians has been made mandatory in North America, thereby providing boost to prescription drug sales over the forecast period.

Rising collective efforts by key players to improve their product portfolio and to ensure high-quality standards are projected to boost the regional demand. For instance, in May 2017, Norbrook launched chewable Carprieve tablets for dogs in a probe to expand its product portfolio.In November 2018, Elanco collaborated with Novozymes A/S in a probe to improve its animal health products.

Asia Pacific is expected to showcase lucrative growth over the forecast period owing to growing trend of pet adoption and emerging regional economy. Moreover, high prevalence of animal diseases has led to a rise in the number of surgeries, which is further fueling the growth. For instance, according to a 2016 report published by the Indian Pet and Equine Industry (IIPTF), around 15 million households in India had pets and 600,000 pets were adopted.

The market is competitive in nature and is marked by the presence of various small and large companies. It is led by participants, such as Boehringer Ingelheim GmbH, Bayer AG, Zoetis, Merck and others. Some new players include Elanco, Aratana Therapeutics, and Norbrook among others.

Key players focus on implementing new strategies such as regional expansions, mergers and acquisitions, new product launch, R&D investments, partnerships, and distribution agreements to increase their revenue share. For instance, in December 2018, Merck acquired Antelliq in a probe to improve its animal vaccines and pharmaceutical portfolio. In January 2018, Elanco received European approval for marketing and selling Galliprant in Europe. Furthermore, in January 2018, Dechra Pharmaceuticals acquired Le Vet and Ast Farma in a probe to expand its business in the Netherlands and Europe.

This report forecasts revenue growth at global, regional, and country levels and provides an analysis of the latest industry trends in each of the sub-segments from 2014 to 2025. For the purpose of this study, Grand View Research has segmented the global veterinary pain management market report on the basis of product, indication, animal type, end-use, and region: