The veterinary prosthetics & orthotics market size was valued at USD 32.3 million in 2021 and is estimated to grow at a compound annual growth rate (CAGR) of 8.9% from 2022 to 2030. The growing number of companion animals, adoption of dog insurance policies, initiatives by key market players, and a growing number of veterinary orthopedic surgeries are some of the key drivers of this market. According to the North American Pet Health Insurance Association (NAPHIA), the region had about 3.45 million insured pets in 2020. This number was notably higher than the 2.81 million pets insured in 2019. 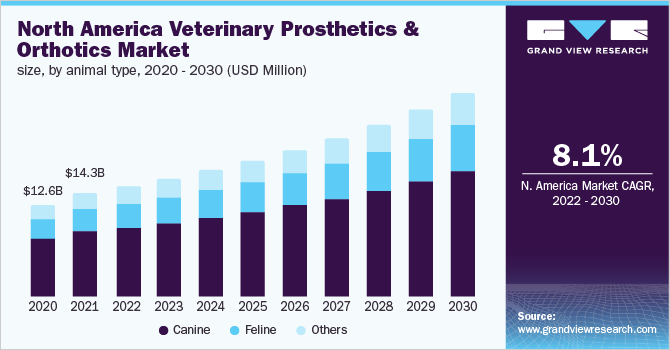 The COVID-19 pandemic adversely impacted the market. This was due to movement restrictions, postponed or cancellation of elective veterinary orthopedic surgeries, and reduced veterinary visits leading to low demand and sales. Harmony Veterinary Center based in the U.S. for instance suspended all veterinary elective procedures in March 2020. It was among the several veterinary services providers to do so. As per April 2020 survey by AVMA, 98% of the respondents comprising veterinarians reported a reduction in client contact owing to the pandemic. About two-thirds of the respondents stated that they had postponed at least some surgical procedures. The surgery volume gradually recovered due to supportive initiatives and guidelines helping the resumption of veterinary surgeries. Overall the COVID-19 pandemic resulted in dampened sales growth for the market participants, the market however is expected to bounce back in coming years.

The market is predicted to rise due to factors such as the increased prevalence of obesity and the growing pet population. According to the American Pet Products Association's (APPA) 2019-2020 National Pet Owners Survey, 67 percent of households, or about 85 million families, in the U.S. own a pet. According to the Chinese Pet Industry Paper, more than 99.15 million dogs and cats were kept as pets in China's cities in 2020. Furthermore, there has been a large increase in the worldwide animal population, which is expected to push the market studied in the future. For instance, in Mexico, there were about 7.9 million cows and calves in 2019, which indicated an increase of more than 7.7 million compared to 2018, as per a report published by the United States Department of Agriculture (Global Agricultural Information, 2019).

Increasing numbers of veterinary hospitals, clinics, and rehabilitation centers offering orthotics & prosthetics products for veterinary animals are anticipated to propel the market growth. Furthermore, pets are owned by an estimated 85 million European households. During the predicted period, the trend is expected to continue to grow. According to the 2019-2020 national pet owners survey conducted by the American Pet Products Association, around 1.6 million households in the U.S. had horses. Dog and cat owners were also the most numerous in the country. As per data published by Der Deutsche Heimtiermarkt 2018, around 15 million cats live in German households, making them the country's most popular pet. Additionally, 59 % of those who do not already own a pet say they plan to do so shortly. Hence, increasing pet ownership will further drive market growth as people are more concerned about their pet's health.

The canine segment held the largest market share of more than 60% in 2021 and is expected to grow at a high rate over the forecast period. Rising pet ownership and expenditure on pets is a key factor contributing to the demand for veterinary prosthetics & orthotics. As per FEDIAF’s 2020 report, 33% or 88 million European households own a pet. This number is anticipated to increase owing to increasing disposable income, declining birth rates in many countries, and pet humanization. Pet owners are worried about their pets and, hence, the demand for efficient treatment is increasing. This trend is expected to continue, thus, fueling market growth during the forecast period.

The feline segment is estimated to grow at the fastest CAGR of over 9% over the forecast period. Furthermore, there has been a large increase in the worldwide population of farm animals, birds, and horses, which is expected to drive the market to study in the future. The global livestock population has also been facing rapid growth over the past few decades. According to the USDA, there were around 103 million cattle and 32.05 million beef cows in the U.S. in July 2020 and the number is expected to grow substantially in the coming years.

The 3D printing segment held the dominant share of the market in 2021, owing to an increase in technological advancement. Printed prosthetics can be light, inexpensive, and completely personalized. For instance, Bionic Pets is the leading provider of animal orthotics and prosthetics. DiveDesign saw an opportunity for innovation in its prosthetics development as part of its quest to transform animal rehabilitation and pain management. DiveDesign developed a digital tool using 3D scanning and printing technology to speed up the production of a full-limb prosthesis.

Furthermore, 3D printing is well renowned for its ability to benefit people from many walks of life, including animals. Animals who have lost limbs or any other essential body parts can benefit from 3D printing in the same way that people can. Numerous animals have had the opportunity to receive tailored 3d printed orthotics or prosthetics, considerably improving their life, owing to increasingly affordable technologies and accurate scans.

The Prosthetics segment held the largest market share in 2021 and is expected to grow at a high rate over the forecast period. It offers certain advantages over other products and is seen as a viable alternative for surgical treatments and post-surgery recovery support. Animal prostheses are medical devices that help animals with lost or severed limbs. The key factors driving market expansion are technological advancements in prostheses and increased adoption rates. Furthermore, technological developments and the introduction of low-cost 3D-printed prosthetics are likely to enhance the market growth. 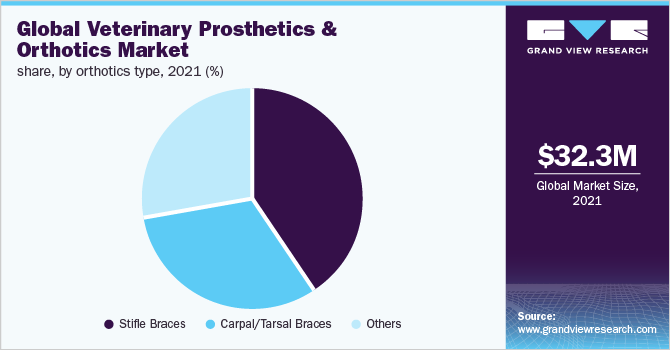 Furthermore, the growing awareness of prosthetics across numerous organizations contributes to market growth. Bionic Pets, for example, is a company founded by a Penn State alum that makes prosthetics and braces for a variety of animals. It distributes casting molds all around the world before manufacturing prosthetic legs or braces in Sterling, Virginia. As a result of the aforementioned factors, the prosthetics market is predicted to increase significantly over the forecast period.

North America held over 45% of the veterinary prosthetics & orthotics market in 2021. Higher availability of therapeutic choices for animals, greater awareness of prosthetics & orthotics, the existence of key market participants, and rising animal health expenditure are all contributing aspects to this region's dominance and growth. Furthermore, with rising companion animal adoption, increasing prevalence of canine arthritis, and rising per capita animal health expenditure, the U.S. is expected to dominate the North American animal veterinary & orthotics market over the forecast period.

The rest of the World is estimated to grow at the fastest CAGR of over 11.3% over the next few years. This is owing to the growing presence of local players, increasing pet dog population, and expenditure on pets. In addition, obesity and overweight are directly associated with osteoarthritis and movement disorders in animals, so an increase in this disease is expected to drive demand for orthotic devices. Excess fat and weight increase stress on the joints, leading to further difficulty in developing and moving arthritis.

The market is competitive. Market players deploy multiple strategic initiatives that include product development, product launches, distribution partnerships, collaborations, and mergers & acquisitions. For example, in December 2020, L'il Back Bracer introduced the Haute L'il Back Bracer, a new dog back brace. Furthermore, in November 2020, Animal Ortho Care introduced two new devices for dogs: shoulder support and a body lift. These devices will join the company's existing EMbrace orthopedic soft support line. Some of the key players in the veterinary prosthetics & orthotics market include:

This report forecasts revenue growth at the regional & country level and provides an analysis of the latest trends and opportunities in each of the sub-segments from 2017 to 2030. Grand View Research has segmented the veterinary prosthetics & orthotics market on the basis of product type, animal type, technique, and region:

How big is the Veterinary Prosthetics & Orthotics market?

b. The global Veterinary Prosthetics & Orthotics market size was estimated at USD 32.3 million in 2021 and is expected to reach USD 34.8 million in 2022.

What is the Veterinary Prosthetics & Orthotics market growth?

b. North America dominated the Veterinary Prosthetics & Orthotics market with a share of 44% in 2021. This is attributable to the higher availability of therapeutic choices for animals, and greater awareness of prosthetics & orthotics.

Who are the key players in Veterinary Prosthetics & Orthotics market?

What are the factors driving the Veterinary Prosthetics & Orthotics market?