The global virtual prototype market size was valued at USD 210.4 million in 2017. It is anticipated to expand at a CAGR of 19.4% from 2018 to 2025. Virtual prototyping, also referred to as digital prototyping or virtual modeling, is the development of computer stimulated prototypes of viable products. These prototypes can be tested for their durability and performance in computer-controlled real world conditions. Innovative prototyping technologies enable organizations to effectively reduce time to market, improve product quality, and minimize overall production costs. Increasing complexity of systems and need to ideate new products for meeting the demand for product prototype simulation and testing are projected to drive the market. 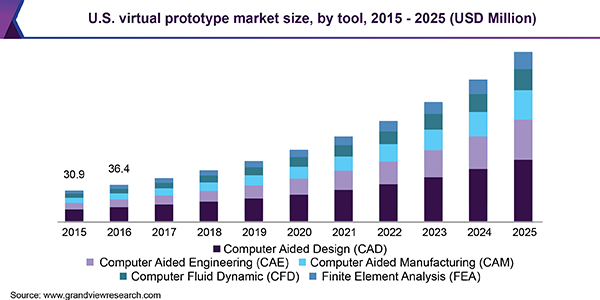 Virtual Prototype (VP) tools have become an essential part of various industries. The integration of technologies such as simulation, Computer-Aided Design (CAD), and Virtual Reality (VR) has enabled the development of accessible, low-cost, and user-friendly VP systems. Such tools are increasingly being viewed as the next generation of computerized design systems. VP is widely being used as a substitute for rapid prototyping, owing to benefits such as minimal time consumption and cost-effectiveness. Moreover, virtual porotype involves carrying out tasks in a computer-controlled environment, where real-world conditions can be simulated to test products or systems before manufacturing is commenced.

Growing competition in the manufacturing industry has led to the use of virtual prototyping techniques for product development as they help enhance product quality. This helps manufacturers retain their position in a competitive environment. Small-scale manufacturers refrain from using VP solutions due to the need for high initial investments and lack of skilled professionals.

Product development can be a challenging task, involving processes such as design, development, testing, and rebuilding of physical prototypes. All these processes consume time and associated costs for achieving the desired outcome. Virtual prototyping is an effective solution that involves simulating an environment for testing products using computing technologies. It reduces the number of physical product rebuilds and mitigates material waste.

VP tools enable the design and development teams to visualize a system. They also ensure seamless operation of all elements and validate real-time scenarios prior to the actual production. This essentially decreasing the inefficiencies of physical prototypes and facilitating faster time to market. Organizations are making huge investments in virtual prototype tools for innovating as well as offering high-quality and low-cost products, enhancing productivity, increasing competitiveness, and ensuring customer satisfaction.

North America and Europe are considered to be mature markets for virtual prototype owing to the early adoption of advanced manufacturing technologies for enhancing production efficiency. Emerging economies such as India, China, and Middle Eastern countries are expected to witness significant growth over the forecast period owing to improving economic conditions, pace of industrialization, and evolving consumer trends and demands.

In 2017, the CAD segment led with a market share of nearly 38.0%. Organizations have witnessed a radical rise in need for CAD tools to support product designing and development in an extensive range of industries such as automotive, construction, manufacturing, and healthcare, among others. CAD tools reduce operational costs and increase production efficiency. CAD also delivers a means for standardizing the drawing process, which eliminates ambiguity in simulation processes. Moreover, CAD is a simple tool used for 2D and 3D visualization and is helpful in understanding different aspects of product prototype during simulation and testing. Thus, the segment is anticipated to gain significant market share over the forecast period.

Currently, CAD/CAM has become an industry standard in the manufacturing sector. Most industrial manufacturers are making investments to deploy virtual prototyping tools to enhance overall production capacity and operational efficiency, which would further help them to compete with their market contenders.

In 2017, the on-premise segment held approximately 65.0% of the global market share. This growth can be attributed to significant demand for deployment of on-premise virtual prototype tools to maintain the confidentiality of a product model or design. Furthermore, high adoption of cloud-based virtual prototype tools by small- and medium-sized manufacturers to reduce high infrastructure costs incurred by on-premise deployment of VP tools is predicted to drive market growth during upcoming years.

Virtual prototype tools find application in several industries, including automotive, aerospace, healthcare, consumer electronics, telecom, and others. The automotive vertical accounted for nearly 34.0% of the global virtual prototype market share in terms of revenue in 2017. This growth can be attributed to the higher adoption of CAD and other VP tools by Original Equipment Manufacturers (OEMs) to increase efficiency in designing and manufacturing, and accurately test product prototype before investing in mass production. 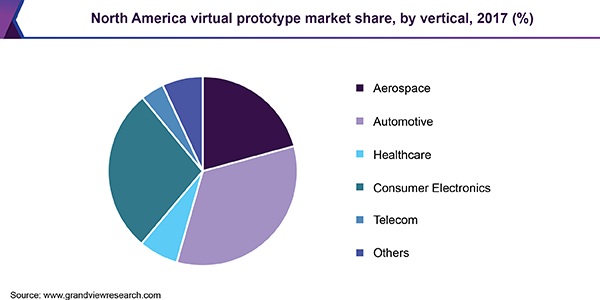 Evolving consumer demand trends with respect to functionality of electronic products are compelling manufacturers to increasingly innovate new products to meet their expectations. On-time product delivery and reduced product development costs are anticipated to drive growth of the consumer electronics segment over the forecast period. Additionally, rapid rise in aircraft production due to a significant rise in international airline passengers is encouraging aircraft manufacturers to focus on meeting the global demand for aircraft in minimal time. Aircraft manufacturers such as Boeing and Airbus are using virtual prototyping processes to design and test their aircraft models before commencing the production process.

Based on region, the global virtual prototype market is segmented into North America, Europe, Asia Pacific (APAC), and Rest of the World (RoW). In 2017, North America accounted for approximately 33.7% market share owing to the high adoption of CAD tools by the aviation and automotive industries for designing the prototypes of aircraft equipment and engines. Furthermore, automobile manufacturers are making huge investments for deploying virtual prototype tools to design and simulate Advanced Driver-Assistance Systems (ADAS) solutions for newly manufactured vehicles. Moreover, major automobile manufacturers such as Ford, General Motors, and Tesla have significantly contributed to the regional market growth.

However, APAC is expected to emerge as the fastest-growing region owing to increasing demand for VP tools for consumer electronics and automotive manufacturing. The presence of some of the largest consumer electronics manufacturers in key countries such as China and Japan is also anticipated to propel the regional market growth over the forecast period.

The companies are also focused on making investments in R&D to develop innovative products. For instance, in 2017, the ESI Group developed a new, smart prototyping tool to help industrial manufacturers to virtually assemble, test, and pre-certify their products.

This report forecasts revenue growth at global, regional, and country levels and provides an analysis of the latest industry trends in each of the sub-segments from 2015 to 2025. For this study, Grand View Research has segmented the global virtual prototype market report based on tool, deployment, vertical, and region: