The global virtual reality market size was valued at USD 960.9 million in 2016 and is expected to spectate a significant growth on account of virtual reality (VR) devices rapidly gaining traction. The projected growth of VR technology and associated devices is attributable to their ability to be incorporated in widespread application areas, such as aerospace & defense, commercial, consumer electronics, industrial, and medical field.

The VR technology has gained prominence over the past year owing to the development and launch of innovative VR headsets targeted primarily for the gaming community. The global VR market is expected to grow exponentially over the forecast period. 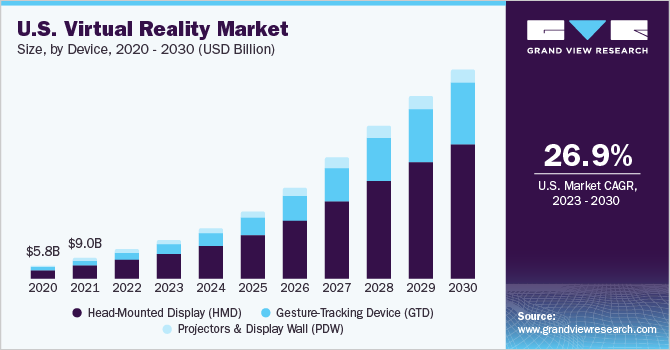 The technology is under constant R&D to develop low-cost, wearable solutions for the mass market. VR has an enormous potential to be incorporated into a wide range of applications including healthcare, education, and industrial prototyping.

VR devices are available for consumers through manufacturers’ websites and outlets, e-commerce websites, and retailers. Purchases made by authorized third-party vendors ensure support and warranty from manufacturers. The current end-use consumption segment is mainly constituted by the gaming community and technology enthusiasts. Marketing and retail also pose promising growth sectors, especially for wearable devices in promotion and advertisement as well as during new product launches.

The market has been segmented based on the types of components into hardware and software VR modules. Presently, the hardware segment is the largest segment contributing a major share to the overall revenue. With the evolution of software, hardware, and motion-control technologies, VR headset has advanced further, incorporating auditory responses.

The software segment is anticipated to dominate the component arena in terms of size by 2025. This trend can be attributed to the growing economies of VR hardware component sales that would alleviate the cost of acquisition by the end of the forecast interval.

Device fabricators are constantly enhancing and developing the technology to integrate it with consumer-grade devices such as digital tablets and smartphones in order to minimize the unit cost and make it more sophisticated. A step further in the technology development is 3D audio, which helps in making users believe that they are a part of the scene in the virtual world. Users can whisper to one another and even determine from which direction someone’s voice is coming by 3D audio technology.

Oculus emerged as one of the key players in the market, driving the adoption of VR headsets among consumers. Samsung Gear VR headset is available to consumers through retailers and online partners.

The virtual reality market has been segmented based on types of devices into Gesture Tracking Devices (GTD), Head Mount Displays (HMD), and Projectors & Display Walls (PDW). The HMD devices segment was the largest in terms of size in 2016 and is anticipated to maintain its dominance over the forecast period.

This growth is stemmed by the growing penetration of smartphones and imminent Internet of Things (IoT) revolution. Head-Mounted Displays (HMDs) are inclusive of wired and wireless variants and exclusive of smart glasses and cardboard cases. Gesture tracking devices include gloves, haptics, treadmills, body units, hand device, and foot controls, and wearable cameras.

GTDs are more inclined toward delivering a dynamic immersive experience as compared to its head mount device counterparts. The GTD device segment includes VR projectors, large screen monitors, and multiple projection systems. It is expected to grow the fastest in terms of CAGR from 2017 to 2025. Gaming applications of VR projectors are display walls used to create a semi-immersive experience.

The virtual reality market has been segmented based on the types of technologies into non-immersive VR and semi-immersive & fully immersive VR. The semi & fully immersive VR technology segment was the largest in terms of size in 2016 and is anticipated to uphold its supremacy over the forecast period, which is attributable to the surging preference of HMD-based VR devices.

The market demand for VR-based software and hardware is anticipated to increase over the forecast period. HTC has launched its headset, the HTC Vive, in fall 2015, along with Sony PlayStation VR been introduced to consumers in the first half of 2016. The VR technology is believed to be disruptive, due to which it is expected to have a massive impact on the hardware market size.

With immense R&D activity in VR device field specifically HMD device sophistication has enabled, field of view and display resolution increase while lag and device weight has decreased considerably. Today, VR headsets provide total immersion with the Oculus Rift providing 100-degree field of view close to the human 120-degree binocular vision. Investment in R&D and development of unique solutions is expected to serve as key driver for the market penetration.

VR hardware are prototypes and with most of them still under the development stage, their market size is expected to increase at a rapid pace with wearables being made easily available at retail outlets and more products being launched in future. The semi & fully immersive VR technology segment would also be the fastest growing in terms of CAGR from 2017 to 2025. 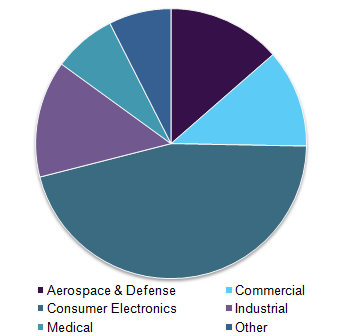 The future of VR seems promising with companies such as Microsoft, Samsung, Sony, HTC, Facebook (Oculus), Nvidia, Valve and AMD all committed towards bringing VR into the mainstream. Oculus has been providing developer version of its Rift headsets since 2014 and is expected to release the consumer version of Oculus Rift in 2016.

The adoption of the VR technology by kids, tweenagers, and teenagers is expected to accelerate the market growth. The medical application segment would be the fastest growing in terms of CAGR from 2017 to 2025. The growing demand for smartphone products penetrates the global consumer electronics sector, which is expected to lead to a high HMD VR device growth over the forecast period.

HMDs and GTDs pose inconvenience to certain users owing to their ergonomics and weight. Health issues include motion sickness and muscle pains that severely restrict the willingness of users to invest in the technology.

The Asia Pacific region is expected to grow at the highest CAGR from 2017 to 2025. VR has gained prominence over the past years owing to the development and launch of innovative VR headsets targeted primarily for the gaming community. The global market is expected to grow exponentially over the forecast period.

Growing demand across healthcare, military, education, and retail sectors is expected to drive the immersive VR market over the forecast period. Increasing use of this technology in products such as cameras, smartphones, and televisions is estimated to boost the market. VR technology further serves as an effective tool for marketing and promotion.

The technology is under constant R&D to develop low-cost, wearable solutions for the mass market. VR has an enormous potential to be incorporated into a wide range of applications including healthcare, education, and industrial prototyping. The North American regional market would dominate the industry in terms of revenue in 2015. This growth is attributed to the increasing early adoption of VR technology innovations in dynamic application arenas.

Market players are focusing on investing in this technology. Consumer electronics manufacturers such as HTC, Samsung, Sony along with technology giants such as Facebook, Google, and Microsoft have also piloted into the marketplace with innovative VR solutions. Strategic alliances and licensing are the key enablers for proliferation of this technology globally. Several start-ups and individuals with technological know-how have upraised funds by means of Kickstarter campaigns and promoted their solutions via online promotions.

This report forecasts revenue growth on the global, regional, and country levels and provides an analysis of the latest trends and opportunities in each of the sub-segments from 2014 to 2025. For the purpose of this study, Grand View Research has segmented the virtual reality market on the basis of device, component, application, technology, and region: