The global wave and tidal energy market size was valued at USD 294.0 million in 2019, growing at a compound annual growth rate (CAGR) of 42.5% over the forecast period. Urgent need to replace current energy sources i.e. fossil fuels such as gas, oil, and coal is a major market driver. The market is also backed by growing funding from public and private sectors mainly for taking control over energy security, employment generation, economic positioning, and addressing changing climatic conditions. 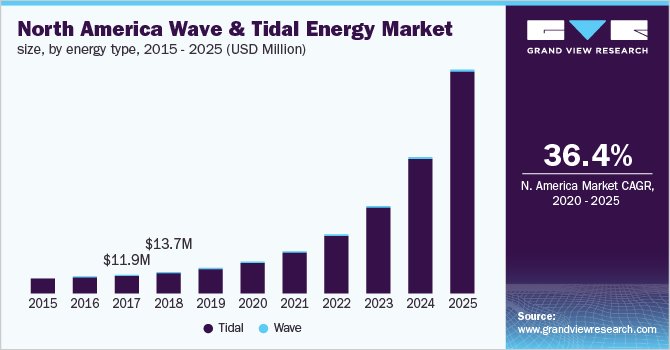 Tidal energy dominated the market in 2016. The tidal stream, which converts kinetic energy into electricity, witnessed higher R&D investments in comparison to wave technology. Factors such as ease of development and technological know-how related to horizontal axis turbines deployed in the wind industry has led to its high adoption worldwide. Tidal range technology has gained widespread acknowledgment. Barrage tidal range technology has witnessed greater R&D developments and is estimated to remain dominant in the near future.

Component and structure developers in the wave and tidal energy market are undertaking cost-cutting initiatives, which involve use of advanced materials, control systems and software, and environmental monitoring. Moreover, upcoming developments in the market in countries like Canada, France, Scotland, Belgium, Sweden, U.K., and South Korea is anticipated to drive ocean technology in the near future.

The use of renewable energy sources can help overcome problems such as the depletion of fossil fuels and environmental issues. The environmental problems are related to both local effects, for instance pollution, and also the production of CO2. This is related to the energy that is produced by utilizing the fossil fuels, which have a negative impact on climatic changes. The reason that the plentiful fossil fuels are unevenly distributed around the globe can potentially give rise to conﬂicts. Majority countries, in order to maintain political stability and sovereignty, are undertaking efforts to stop their dependency on other nations.

The investments in renewable energy sector are mainly spent within the country and often in the same local area where the produced energy is consumed. This helps in boosting the local economies and the creation of jobs.

The year 2016 witnessed a significant expansion in the installation of renewable power capacity worldwide. The capacities in wind, marine, solar, waste-to-energy, small geothermal and hydro sources, and biomass together added up to 138.5GWin 2016 up from 127.5GW in 2015. The share of these renewable sources to produce global electricity saw an increase from 10.3% in 2015 to 11.3% in 2016, and effectively helped in averting CO2 emission that was estimated to be around 1.7 giga tons.

Capital costs of marine energy projects are currently relatively higher in comparison to the offshore and onshore wind. These costs may fall significantly with the development of devices and manufacturing and installation processes getting industrialized.

Costs in the future are anticipated to fall due to three reasons namely industry learning, technical innovation, and industrialization. Ocean energy projects have been financed majorly through research, development, and demonstration project funds. This requires large-scale public-private partnerships. Incentives are needed for private entities to invest in ocean energy technologies. Market conditions need to be created at the early stage of industry development to create a market pull and to incentivize early adopters.

The penetration of wave energy in the global market is less in comparison to tidal energy. Investors have been involved in the assessment of an effective deployment plan for wave projects. The market is expected to witness considerable growth in Asia Pacific due to increasing investments in numerous economies including Japan, Thailand, Philippines, and India

Globally, the number of wave energy projects installed between 2014 and 2016 were limited. Majority of the projects include small-sized WECs (rated power < 50 kW) and a limited number of devices with higher power rating such as CETO5 (240 kW) and WaveRoller (300 kW).

Tidal energy technology accounted for a global revenue share of 97.1% in 2016.Development of converters has progressed steadily over the past few years. The most significant step toward the commercialization of tidal technology is represented by the MeyGen project, which has been operational since 2016.

The European Union is at the forefront of technological development. The period from 2014–2016 witnessed significant progress in the tidal energy technology sector, which has contributed toward its commercialization. Key technology developers such as Atlantis Resources, Andritz Hydro-Hammerfest, and Openhydro have optimized their technologies for deployment in Scotland (Atlantis and Andritz), France (Sabella and Openhydro), and Canada (Openhydro).

Asia Pacific accounted for a revenue share of 39.0% in the global market in 2016. Public funding programs, environmental regulations, government policies, and competition are likely to facilitate the growth of marine energy technology in the region. Manufacturers have been involved in development of new designs as well as manufacturing processes to cater to rising demand for clean energy.

Asia Pacific is one of the key and most attractive markets for wave and tidal energy worldwide. Substantial growth of the economy, awareness amongst the population, availability of resources, and developments in open test sites are anticipated to boost market growth over the forecast period. 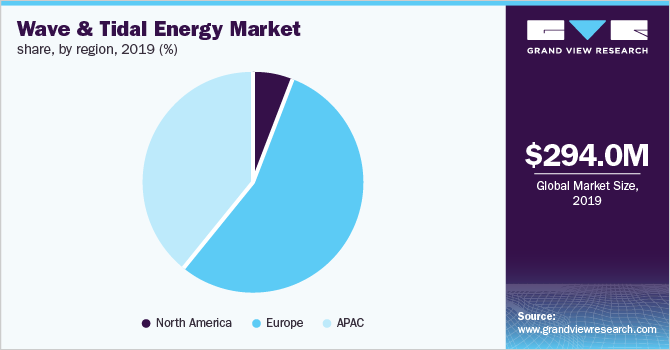 Projects in China have shown good progress in the past couple of years, such as the deployment of LHD Tidal current energy demonstration project near the Xiushan Island in 2016; installation of new turbines near the Zhairuoshan Island in 2017; the hybrid project, which includes a 300-kW wave energy device, has been approved by SOA in 2016.

The North America market has witnessed several developments in recent years. As of 2016, renewable sources accounted for approximately 15.0% of the total electricity generation in U.S. Canada has a major market for ocean technology in the region. Nova Scotia is estimated to be a major market in Canada at the provincial level, where a sum of USD 50.0 million has been committed to marine energy since 2010.

Canada is estimated to account for the major share in the North America wave and tidal energy market. A strong legislative framework has played a major role in driving the wave & tidal energy market in the country. As of 2016, over USD 50.0 million national public funding has been devoted to marine energy since 2010. Nova Scotia, one of eastern Canada’s Maritime Provinces in the Atlantic Ocean, has directly invested in the development of FORCE, Canada’s leading research center for in-stream tidal energy, through a contribution of USD 11.0 million, in addition to the support for a number of strategic research projects in marine energy. 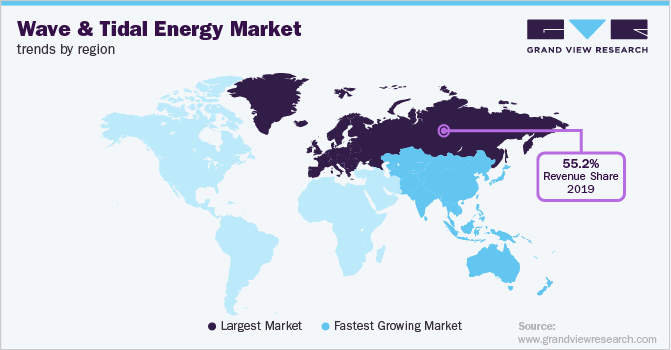 In 2016, more than 90.0% of the entire ocean technology operating capacity was represented by two tidal barrage facilities, namely Sihwa plant in the Republic of Korea with a capacity of 254 MW and France’s La Rance power station with a capacity of 240 MW. The rest of the projects are under pre-commercialization and development phases.

Companies are also establishing offices/branches at new locations to harness energy from locations that would be in sync with their requirements. This, in turn, is likely to enhance their manufacturing capabilities, safety, and quality measures. Players are also likely to enter into partnerships with other companies in an attempt to widen their technological portfolio.

This report forecasts revenue growth at global, regional, and country levels and provides an analysis on latest industry trends in each of the sub-segments from 2014 to 2025. For the purpose of this study, Grand View Research has segmented the global wave and tidal energy market report on the basis of energy type, and region: 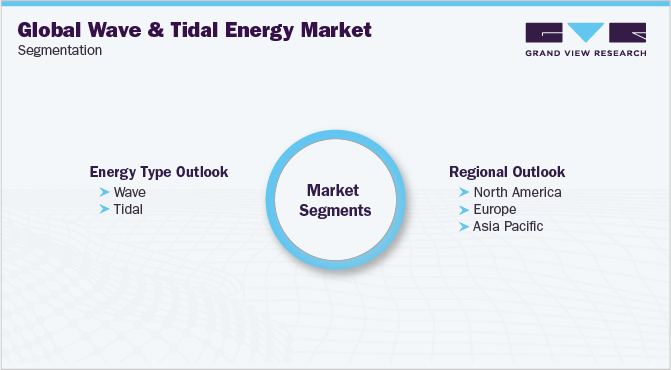