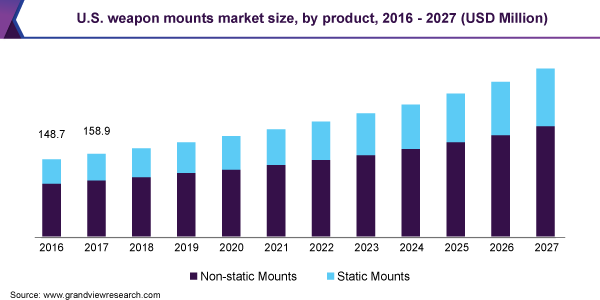 In the U.S., the market stood at USD 181.9 million in 2019 and is anticipated to accelerate at a significant growth rate in the estimated time until 2027. Ongoing conflicts between the U.S. and Iran are anticipated to increase defense spending in the coming period. Furthermore, the growing popularity of unmanned vehicles for ground and aerial operations is expected to provide scope to the market.

Territorial and political conflicts between major economies have increased the precautionary measures for tactical and military operations. Moreover, the prominent defense systems are focusing on the procurement of advanced war equipment with minimal operation. Thus, are likely to have a positive impact on the market in the estimated period.

Technical advancements in the mounting mechanism have offered static and non-static ways to operate the mounted weapons. These mounts can be modified and can be converted according to the dimensions of the weapons including automatic guns, machine guns, and others. Also, the mounts can be directly and remotely operated.

Innovations by the prominent players have offered dynamic mounts for operational use on ground, naval, and airborne platforms. Increasing investments for defense systems and prevalence for no human harm in critical zones are expected to deploy unmanned vehicles and aircraft, thus are expected to support the demand for weapon mounts.

Weapon's non-static mounts type segment accounted for the largest market share of 67.7% in 2019 and is expected to maintain its dominance over the forecast period. Growing demand for the movement of mounted weapons on the vehicles and ground operations are likely to ascend the demand for non-static weapon mounts in the estimated time.

Prominent militaries across the globe are investing in the procurement of advanced mechanisms for mounting specialty weapons, thus are supporting the market on a positive note. These mounts are utilized in the training and on-ground military, naval, and tactical operations, thereby, affecting the demand on a positive note.

The weapon’s static mounts are used to fix targeting in defense operations. These are non-portable mounts, which lock the weapons once mounted on it. Turrets and coaxial mounts head the majority of the demand for static mounts owing to their rising popularity for compatibility and usage, thereby supporting the market positively.

Increasing demand for unmanned war components at fixed locations such as borders and critical zones is expected to install static weapons, thus supporting the demand for static mounts. However, less precision and compatibility with limited weapons are anticipated to pose challenges for the growth of the segment in the weapon mounts market.

In 2019, the ground platform segment accounted for the largest share of 46.9% and is expected to continue this trend over the forecast period. Increasing investment in defense operations across the globe, majorly for ground activities is expected to support the demand for weapon mounts on a positive note.

The mounts installed on the ground platform find applications in tanks, infantry fighting vehicles, armored carriers, protected vehicles, and mortar carriers. These are majorly fixed mounts that need enhanced stability when mounted on moving objects. Ground defense operations are expected to increase in light of political and territorial conflicts between major economies across the globe, thus are expected to support the industry in the estimated time. 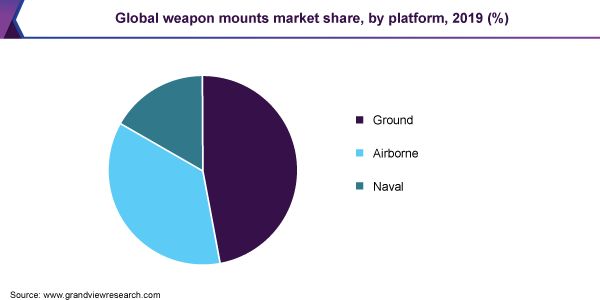 Asia Pacific was the largest market for weapon mounts in 2019 with a revenue share of 38.4% and is anticipated to continue this trend in the estimated period. China, India, Japan, South Korea, North Korea, and Pakistan, are among the largest players investing in defense operations. Growing tensions between the countries in the region and need to strengthen the defense capabilities are likely to create scope for the market.

The ongoing conflicts between the U.S. and Iran have led to the enhancements in the defense systems of the respective countries, thus the demand for the mounts is expected to increase in the projected time. Commission of advanced weapons and components by the U.S. defense systems is projected to support the market over the forecast period.

Europe accounted for a significant share for the consumption of weapon mount in 2019 and is projected to ascend in the estimated time. Increasing defense investments by the major economies including the U.K., Germany, France, and Russia are expected to increase the procurement of advanced weapon systems, thereby, supporting the market on a positive note.

In the Middle East and Africa, the market is expected to accelerate in the anticipated duration owing to the high investments in defense systems. Saudi Arabia, UAE, Iran, and Iraq have significantly invested in their respective militaries and air forces and thus, have impacted the market on a positive note.

The market has been witnessing increasing investments in the structural and mechanism development in the weapon and its related installation of ground, naval, and airborne platforms. Thus, it has created scope for the procurement of a varied range of mounts for weapon installation to perform the desired operations.

The multinational manufacturers in the market are continuously investing in R&D to introduce convertible mounts for an array of weapons. Moreover, the handling mechanism of the products and its relative handling techniques by the personnel are factors considered for the product development. Some of the prominent players in the weapon mounts market include:

This report forecasts revenue growth at global, regional, and country levels and provides an analysis of the latest industry trends in each of the sub-segments from 2016 to 2027. Grand View Research has segmented the global weapon mounts market report on the basis of type, platform, operation, and region: